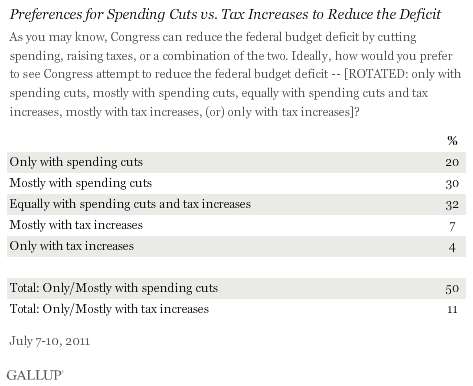 These results are based on a July 7-10 Gallup poll, conducted as government leaders from both parties continued negotiating an agreement to raise the federal debt limit. Both Republicans and Democrats appear willing to raise the debt limit, provided the government outlines plans to significantly reduce federal deficits in the future. The parties generally agree on making deep spending cuts, but do not agree on whether tax increases should be included to help reach their target goals for deficit reduction. Many Republicans in Congress oppose any such tax increases; thus, the legislation may not pass if tax hikes are included.

Americans do not necessarily share this view, with 20% saying deficit reduction should come only through spending cuts. That percentage is a little higher, 26%, among those who identify as Republicans. Republicans do, however, tilt heavily in favor of reducing the deficit primarily if not exclusively with spending cuts (67%) as opposed to tax increases (3%). Fifty-one percent of independents share that preference. Democrats are most inclined to want equal amounts of spending cuts and tax increases (42%), though more favor a tilt toward spending cuts (33%) than tax increases (20%).

There is political cover for Republicans to accept some tax increases or tax reform in return for receiving massive concessions from Congressional Democrats and President Obama on government spending.

But, whether Republicans will accept ANY tax increases and then vote to increase the debt ceiling is doubtful.

The best approach may be for the GOP House to vote for a three or six month debt ceiling extension without tax increases (all cuts) and dare Democrats in the Senate to filibuster it or President Obama to exercise his veto.

Then, there is the gang of six.