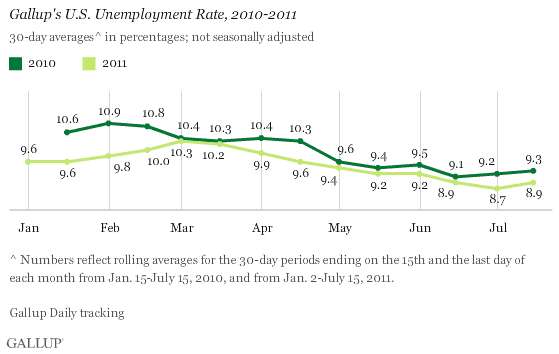 
Unemployment, as measured by Gallup without seasonal adjustment, is at 8.9% in the middle of July — up from 8.7% at the end of June. Unemployment was at 9.3% at this same time a year ago. 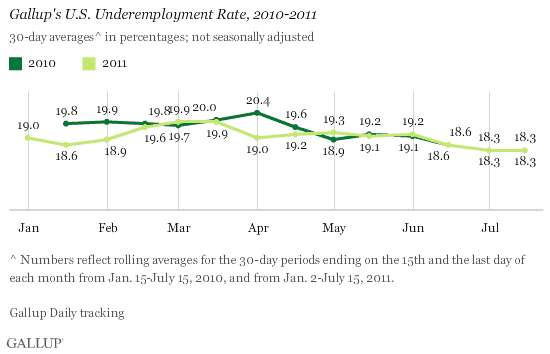 American unemployment will continue to dog the Obama administration throughout the summer. The job situation is about the same as last year and there appear to be no help on the way.


Gallup’s modeling of its most recent unemployment results suggests an early July deterioration in the U.S. jobs situation. This may be partly a lagged effect of the economic soft patch during the first two quarters of 2011. It may also be a sign that many employers are pulling back on their hiring intentions, as slower-than-expected economic growth has reduced their sales and revenue expectations for the second half of the year.

Company hiring may also be suffering from the political rhetoric surrounding the debate over raising the federal debt limit. There seems to be a lack of clarity about exactly what would happen if the federal government is temporarily unable to pay its obligations — although everyone knows such an outcome would not be good. In addition, there are uncertainties on Wall Street, financial problems in Europe, and a sharp drop in economic confidence on Main Street. It is hard to hire when business prospects become so much more uncertain than usual.

Federal Reserve Chairman Ben Bernanke, in his testimony before the Congress last week, repeated his view that the weakness in today’s economy is temporary and that economic activity will pick up in the second half of 2011. At this point, the lack of job growth as reflected by Gallup’s unemployment, underemployment, and job creation data does not support that assessment. Instead, Gallup’s survey results tend to imply that the current economic soft patch may be somewhat less transitory than the Fed chief hopes.

The chart as to how Gallup’s unemployment rate differs from the U.S. Bureau of Labor Statistics.