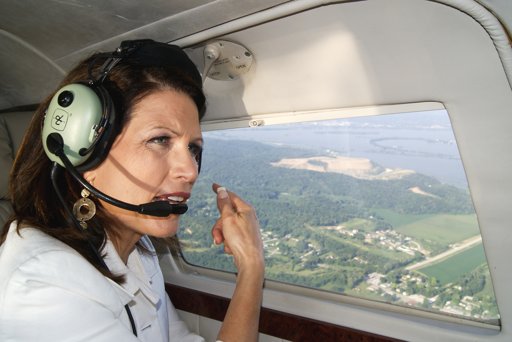 Republican presidential candidate, Rep. Michele Bachmann, R-Minn., flying in a light plane over flooding from the Missouri River, near Hamburg, Iowa, Monday, July 18, 2011. Bachmann said the magnitude of flooding along the Missouri River this summer warrants a presidential visit. Bachmann and a fellow Republican House member, Steve King, R-Iowa, took an aerial tour of the flooding on Monday morning

I have had many family memebers, patients, employees, friends and acquaintances that have had a history of migraine headaches. These have been mostly female and some have had symptoms more severe than others.

Now, this cheap shot against Republican Rep. Michele Bachmann has been answered by her physician.

An insider who once worked with Rep. Michele Bachmann (R- Minn.) told ABC News he believes her migraine headaches have been a persistent and vexing problem for years, often forcing the congresswoman to cancel meetings, shut her office, turn off the lights and lie down until they pass.

“You’re probably talking once every two to four weeks where she would have severe headaches, and at times it would be more frequent,” the former insider told ABC News, speaking on the condition he not be identified because he was concerned about retribution. “They would come on in a matter of minutes. She would be down on her couch with the lights off and unable to function.”

The GOP presidential candidate confirmed to reporters Tuesday that she suffers from migraine headaches, but she said they were controlled by medication and her condition would not affect her ability to serve as president.

“I’ve maintained a full schedule between my duties as a Congresswoman and a presidential candidate traveling across this nation,” Bachmann said. “I have prescribed medication I take on occasion whenever symptoms arise and they keep my migraines under control. But I’d like to make it abundantly clear, my ability to function effectively will not affect my ability to serve as Commander in Chief.”

Here is a copy of her doctor’s note: 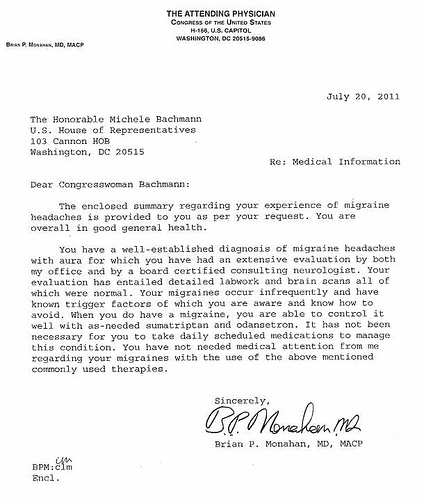 This kind of personal attack on Bachmann reminds me of the age old flyer under the door late at night before the next day caucus vote in Republican Party politics. No doubt that this “insider” who leaked this not so devastating revelation about Bachmann (probably a former GOP staffer in the employ of another GOP Pol) will be identified and made to pay the price – or not.

There seems to be quite a bit of sympathy for Michele Bachmann around the internets and particularly from women who frequently experience the worst form of migraine headaches and who are often stigmatized because of them.