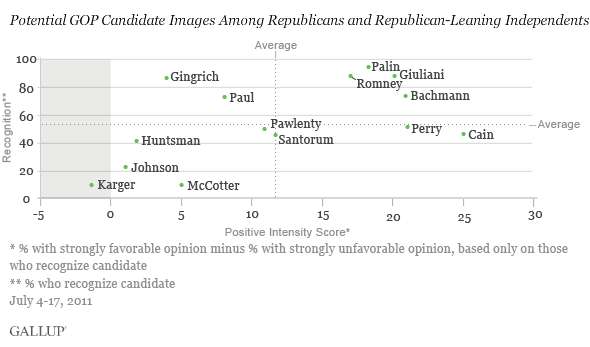 Neither Perry nor Giuliani has made an official announcement about running for president, although both have indicated that they are seriously considering it. Perry, governor of Texas since 2000, told an Iowa newspaper that he felt “called” to run. Giuliani, who was the front-runner for the GOP nomination through much of 2007 before losing out to John McCain, has traveled frequently to New Hampshire in recent weeks.

Despite intense media speculation about his presidential plans, far fewer Republicans recognize Perry (55%) than recognize Sarah Palin, Mitt Romney, Newt Gingrich, Michele Bachmann, and Ron Paul. Perry, however, is already known by as many Republicans nationally as announced candidate Tim Pawlenty, and has higher name recognition than several other candidates who have been hard at work campaigning in recent weeks, including Rick Santorum, Herman Cain, and Jon Huntsman.

I doubt Rudy will enter the race unless Sarah Palin does and who knows about Sarah at this point. Rudy would rely on a split in the conservative vote to allow him the power to either win late primary contests in the East and Far West (where he is most popular) or broker the GOP convention.

But, remember that Texas Governor Rick Perry endorsed Rudy in 2008 and they continue to be good friends. It is likely that Rudy would defer a run for his friend, in order to thwart Mitt Romney, who Giuliani does not care so much about.

Of course, Rudy would be an immediate front-runner for the Vice Presidential spot with Perry. A Perry-Giuliani ticket would be very formidable against Obama-Biden.

In their inaugural appearance in Gallup’s weekly GOP candidate tracking, Perry and Giuliani have strongly positive images among Republicans nationwide, with Positive Intensity Scores in the top tier of all candidates and potential candidates Gallup measures. Both men generate slightly more intensely positive responses than Romney, and considerably more positive reactions than several other announced candidates who have been campaigning actively, including Pawlenty and Huntsman.

Perry does have relatively low name recognition among Republicans nationwide, roughly on par with where Bachmann was at the beginning of this year. Bachmann’s name recognition has increased significantly since then, however, in contrast to the situations of Pawlenty, Huntsman, Santorum, and Cain, who have not been able to move the needle on name recognition despite vigorous campaigning. It remains to be seen how quickly Perry’s name recognition will increase if he officially jumps into the race.

Giuliani does not have a name ID problem; he is as well-known as any candidate or potential candidate tested except for Palin. Giuliani also scores well on Gallup’s Positive Intensity measure, meaning that both he and Perry would be formidable factors in the race for the GOP nomination should they make the decision to run.