Pelosi’s statement came shortly after Politico first reported that Wu would not seek an eighth term next year, which a Democratic source confirmed, adding that pressure is building for his resignation.

“With deep disappointment and sadness about this situation, I hope that the Ethics Committee will take up this matter,” Pelosi said. “I will send a letter to the Ethics Committee [Monday] asking them to formally initiate a review of this matter.” Democratic Congressional Campaign Committee Chairman Steve Israel (N.Y.) supported the Minority Leader’s request in a separate statement.

And, DCCC Chairman Rep Steven Israel is calling for Wu to resign.

But, again, what leverage does the leadership have? 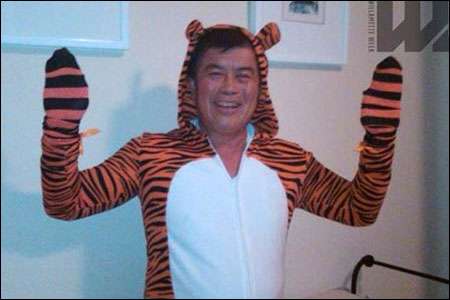 Congressman David Wu of Oregon did some interesting things right before his re-election in last years midterm elections. He allegedly wandered around Oregon like an insane person, for one. Also, it appears he sent his staff e-mails like an insane person, along with photos of him dressing up like some kind of tiger furry

This has to be driving the Dems wild in D.C.

Embattled Rep. David Wu will not seek reelection in 2012, but he wont resign from office now despite allegations that the Oregon Democrat had an unwanted sexual encounter with the teenage daughter of a close friend last Thanksgiving.He isnt going to be running for reelection, a Wu adviser, speaking on the condition of anonymity, told POLITICO late Sunday night. But he hasnt done anything that rises to the level of requiring him to resign.

Wus decision to stay in office comes after a frenzied weekend of lobbying and pressure tactics designed to convince the Oregon Democrat to leave office, all of which seemed to have failed for now. House Minority Leader Nancy Pelosi (D-Calif.) is likely to step up the pressure on Wu following this latest development.

Pelosi and other top Democrats are reviewing their options on Wu, which include outright calls for him to resign or to seek an Ethics Committee investigation into the explosive allegations against him.

First it was New York Rep. Anthony Weiner and the continuing story of the strange behavior of Rep. David Wu.Not a good summer for Congressional Democrats and Nancy Pelosi.

By the way, Wu should be assigned to a closet until he resigns.