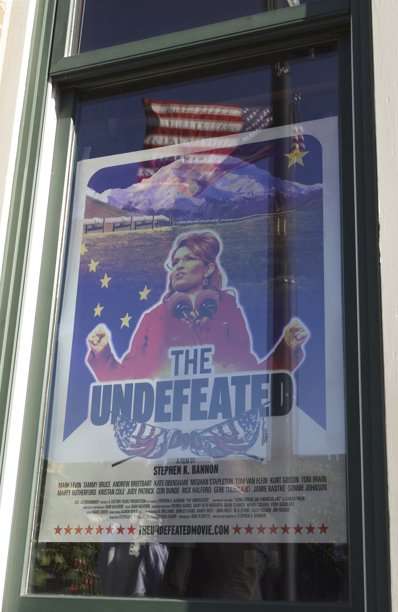 A movie poster advertising the Sarah Palin documentary “The Undefeated” is seen at the film’s premiere in Pella, Iowa June 28, 2011. The documentary traces Palin’s rise from mayor of tiny Wasilla, Alaska, to state governor and her rise as the Republican vice presidential nominee and John McCain’s running mate in 2008

It is not as if Sarah will announce her candidacy for President or anything.


In the latest indication that her sights are still set on a presidential run, former Alaska Gov. Sarah Palin has accepted an invitation to keynote a Tea Party rally in Waukee, Iowa, on Sept. 3, RealClearPolitics has learned.

The Labor Day weekend visit to the nation’s first voting state comes after Palin indicated during an appearance on Fox News earlier this month that she would make her decision about whether to launch a campaign in August or September.

All signs now point to September as the month when Palin would throw her hat into the ring, as logistical concerns ranging from fundraising to getting her name on the ballot in various states would likely preclude further delay.

Many prominent political analysts and Republican operatives have expressed skepticism that Palin is seriously considering a presidential bid, since she has not taken many of the steps that candidates traditionally take before jumping into the race, such as signing early-state consultants, contacting key powerbrokers and boosting their travel schedules.

But Palin has a long history of shunning the Republican Party machinery and taking an unconventional approach to campaigns — a mind-set that appears to have been in play throughout the past several months.

Palin’s latest appearance in Iowa will come just two days after “The Undefeated,” a documentary film spotlighting her accomplishments in Alaska, will be released on Pay-Per-View and video-on-demand. In the film, Palin is portrayed as a continual thorn in the Republican establishment’s side. And it is the GOP, rather than the Democratic Party, that garners the better part of the movie’s scorn.

If Palin were to announce a White House run, the theme of her campaign would almost certainly focus on resisting the ingrained political culture and what she sees as being wrong with the status quo, and much of the Republican Party itself, in addition to continuing to offer one of the most strident contrasts to President Obama’s policies.

The outdoor rally on the first Saturday in September will take place at a field in Waukee, located just outside of Des Moines, and will be hosted by the Tea Party of America — an Iowa-based political action committee that was founded in May.

The midday affair will be the new group’s kickoff event and is sure to generate a large crowd and massive media attention.

I am tired of try to prognosticate what Sarah will do, because she is unpredicatble. I can dare say though, that if she runs, so will Rick Perry and Rudy Giuliani.

Sarah is the “wild card” without a doubt in the race for President in 2012.