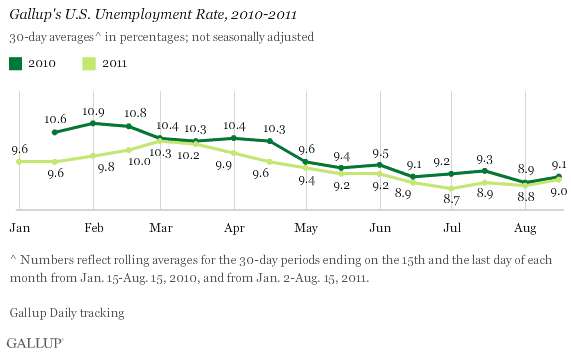 In the meantime, underemployment as measured by Gallup shows some modest improvement. 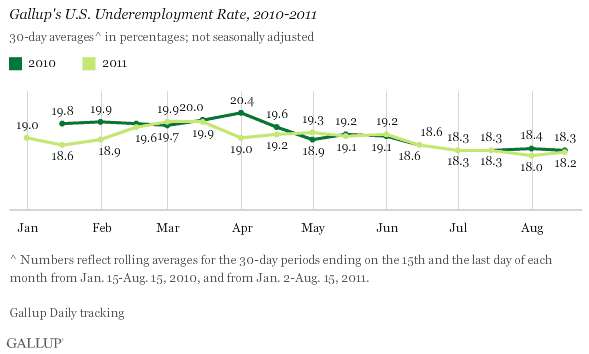 The youngest and oldest workers continue to struggle in the economy. Also, the less educated.

One worrisome aspect of the current situation is that the U.S. economy simply has not been growing fast enough — as reflected in first half GDP — to create the number of new jobs necessary to meet population growth, let alone significantly reduce the unemployment rate. This is consistent with Gallup’s finding that unemployment now is essentially no better than it was at this time in 2010.

In particular, it appears Americans 65 or older who want to continue to work are having more of a problem finding a job than they did a year ago. Unemployment among this group increased to 8.2% this year from 6.7% a year ago. It may be that more baby boomers want to or need to keep working as they reach retirement age. Or, the losses on Wall Street over the past couple of years may be making many older Americans postpone retirement. Whatever the reasons, the job situation facing older Americans seems to be deteriorating.

At the other end of the age spectrum, unemployment hovers around the 12% level among those aged 18 to 29 (at 12.4% in mid-August, up from 11.9% a year ago) and among those with a high school education or less (11.9%, vs. 12.0%). Continued high unemployment among these two groups supports the notion that the prolonged and historically high unemployment rates of the past several years signify a serious structural unemployment problem in the U.S.

And, regionally employment in the Eastern part of the United states appears to have deteriorated from a year ago. It is unchanged in the South while unemployment has declined in the West and Midwest.

So, what are the implications?

President Obama and incumbent Members of Congress are looking for improving employment numbers. They are not and remember NO incumbent President has been re-elected with a national unemployment figure above 8 per cent, unless the trend like in the Reagan years is demonstrably improving.

The economy is stagnant and unemployment is NOT improving.

A danger sign for incumbent POLS, particularly with Senior Citizen voters who DO turn out and VOTE.