After months of saber-rattling by the conservative, second-term lawmaker about a potential challenge to Hatch, Chaffetz will say later today that he won’t run, The Salt Lake Tribune reported this afternoon. 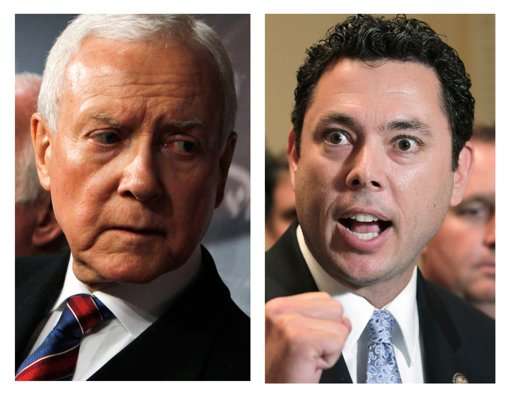 Utah Senator Orrin Hatch and Republican Congressman Jason Chaffetz, a Tea Party favorite
Well, there will be an announcement this afternoon one way or another.


Republican Rep. Jason Chaffetz of Utah will announce Monday whether he will launch a primary challenge against Sen. Orrin Hatch next year.

“Monday at 4:00pm MT (6:00pm ET) I plan to announce my intentions regarding my running for office in the House of Representatives or the U.S. Senate,” Chaffetz said in a statement.

Conservative activists in Utah, who wish to remain anonymous, tell CNN that Chaffetz appears to be leaning toward a bid for the Senate.

Hatch, who is running next year for a seventh term in the Senate, is facing opposition from some in the tea party movement, including FreedomWorks, a major DC-based conservative grassroots organization that is actively working to find a candidate to take on Hatch in next year’s primary.

Last year FreedomWorks was one of the groups that targeted three-term Republican Sen. Bob Bennett of Utah in the months leading up that state’s GOP convention. Bennett was defeated at the convention in his bid for his party’s re-nomination. Conservatives Mike Lee and Tim Bridgewater advanced to the party primary, with Lee winning the GOP nod and then the general election.

Regardless of the fact that Sarah Palin announced her support for Hatch, Chaffetz may very well feel that anti-incumbent sentiment is too great not to run.

Politics, after all, is a game of opportunity.