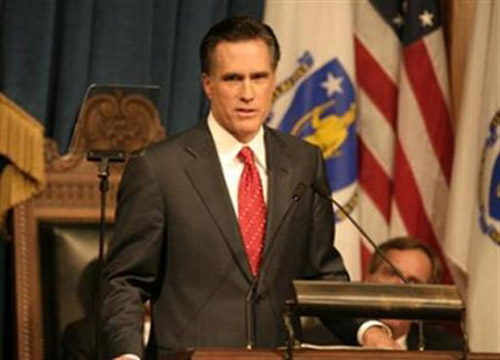 Massachusetts Governor Mitt Romney delivers his annual State of the Commonwealth, January 18, 2006. Massachusetts lawmakers overwhelmingly approved an ambitious health-care bill on Tuesday that would make it the first U.S. state to require nearly all residents to be insured or face penalties

I was reading a tweet from Washington Examiner’s Phil Klein about cleaning out his old G-Mail box and discovering an old Google Chat about Mitt Romney and RomneyCare. Then, I remembered I had written a post many years ago (April 5, 2006 to be precise) criticizing Romney and his Massachusett’s health care plan.


A Massachusetts plan that blends the Democratic goal of universal health care with the Republican philosophy of personal responsibility could be a model for politicians nationwide â€” and a presidential launching pad for its chief sponsor, GOP Gov. Mitt Romney.

“To come up with a bipartisan plan in this polarized environment is commendable,” said the former first lady, who led President Clinton’s failed health care campaign.

She embraced the Massachusetts measure’s most striking aspect ” requiring people to purchase health insurance ” but questioned Romney’s plans to eliminate a fee on companies that do not provide health insurance for employees.

“That would unravel the plan,” Clinton said.

Of course, the LEFT and Clinton like this compulsory state sponsored plan – they want national universal care and this is a step toward their goal.

Romney STRIKES OUT with this proposal.

Romney’s health care plan is another socialistic attempt to nationalize medicine. Why would ANY conservative support this fiasco?

Sally C. Pipes over at National Review has Unhealthy in Massachusetts, The Romney plan doesn’t cut it.

As for Hillary……she will have to debate health care with Rudy Giuliani in the 2008 Presidential debates not a light weight (who has decided to NOT run for re-election) like Mitt Romney.

Mitt Romney has a RomneyCare problem which will likely be exploited by Michele Bachmann and Rick Perry. If he gets by them, then he will have to convince the American people that Sally Pipes is wrong and that ObamaCare is different than RomneyCare.