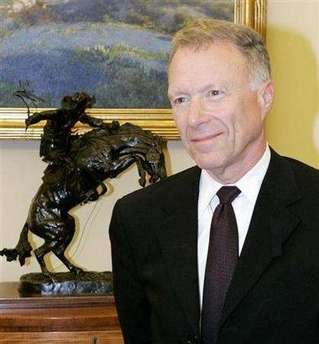 Jen rubin explains why in this excellent piece on Colin Powell, Richard Armitage, Vice President Cheney and his Chief of Staff, Scooter Libby.

The extent of the dishonesty is quite stunning. In a Cabinet meeting on October 7, 2003, the White House press corps bombarded President George W. Bush with questions about who the leaker was. Bush said he didn’t know, but there would be an investigation to get to the bottom of it. Powell, who had been told by Armitage just days earlier that Armitage was the leaker, sat there next to the president, stone silent. Not very loyal or honest, was it?

Moreover, the notion that Armitage’s slip was somehow inadvertent is belied by Bob Woodward’s taped interview in which Armitage repeatedly mentions Joe Wilson’s wife, evidently doing his best to get Plame’s identity out there. This was no slip of the tongue. Woodward testified that when he spoke to Libby sometime later that Libby never said anything about Plame.

At issue here is not simply Powell and Armitage’s deception and undermining of their commander in chief. There was a victim, one whom neither Powell or Armitage has ever apologized to. The person who ultimately paid the price for this was Scooter Libby. Had the president and the country known about Armitage, a special prosecutor would never have been appointed. Libby was eventually convicted on the basis of a he-said-he-said dispute between his recollection and that of the late Tim Russert. (Charges concerning Libby’s alleged comments to Judy Miller were dismissed, and he was acquitted on the count involving Matt Cooper.) A compelling case for Libby’s innocence can be found in this account by Stan Crock.

Powell may be peeved at being fingered by Cheney. But on this one Cheney has him dead to rights. The Plame is a blot on his record and that of Armitage. Maybe it is time to own up and make amends rather than bristling at Libby’s former boss.

Dick Cheney said that when his book, In My Time, was released that heads would explode in D.C. It appears that Colin Powell’s has and he should apologize to Libby and Cheney for his despicable conduct in the Valerie Plame matter.