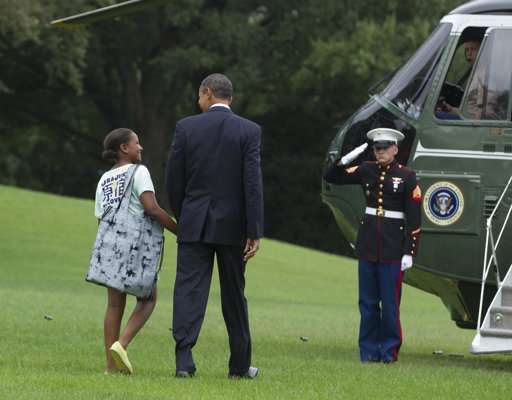 President Barack Obama walks with his daughter Sasha Obama across the South Lawn of the White House in Washington, Friday, Sept. 2, 2011, to board Marine One en route to Camp David

I think Jen Rubin has it about right.

The Associated Press headline reads: “Employers added no net jobs in August, while unemployment rate was unchanged at 9.1 pct.” The New York Times blasts: “U.S. Showed No Job Growth in August; Rate Stays at 9.1%.” But equally apt would be: “Obama’s reelection prospects nose-dive.” Given that we are, for the first time in 11 months, not creating any new jobs, the outlook for a double-dip recession is real. And, moreover, even if we do not slip into consecutive quarters of negative growth (the technical definition of “recession”), we are certainly heading in the wrong direction. According to Matt McDonald, a former Bush official and now a business consultant, in order to get to 8 percent unemployment by Election Day we would need 270,000 new jobs each month. To get to 8.5 percent we would need to create 215,000 jobs monthly. Just to inch down to 9 percent would require 159,000 jobs every month.

Not surprisingly, the GOP contenders pounced…

With economic conditions so poor and no hope for an immediate turn around, President Obama will struggle to change the narrative – his Presidency is a FAILED one.

But can the Republican Presidential candidates close the deal?