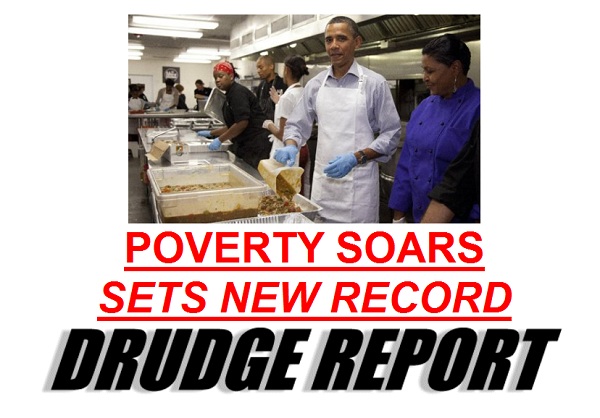 Remember in 2008, when Senator and then Presidential candidate Barack Obama told Joe the Plumber about “spreading the wealth around.”

Guess it wasn’t wealth that Obama spread around.

The ranks of U.S. poor swelled to nearly 1 in 6 people last year, reaching a new high as long-term unemployment woes left millions of Americans struggling and out of work. The number of uninsured edged up to 49.9 million, the biggest in over two decades.

The Census Bureau’s annual report released Tuesday offers a snapshot of the economic well-being of U.S. households for 2010, when joblessness hovered above 9 percent for a second year. It comes at a politically sensitive time for President Barack Obama, who has acknowledged in the midst of his re-election fight that the unemployment rate could persist at high levels through next year.

Reflecting the lingering impact of the recession, the U.S. poverty rate from 2007-2010 has now risen faster than any three-year period since the early 1980s, when a crippling energy crisis amid government cutbacks contributed to inflation, spiraling interest rates and unemployment.

Measured by total numbers, the 46 million now living in poverty is the largest on record dating back to when the census began tracking poverty in 1959. Based on percentages, it tied the poverty level in 1993 and was the highest since 1983.

The share of Americans without health coverage rose from 16.1 percent to 16.3 percent — or 49.9 million people — after the Census Bureau made revisions to numbers of the uninsured. That is due mostly because of continued losses of employer-provided health insurance in the weakened economy.