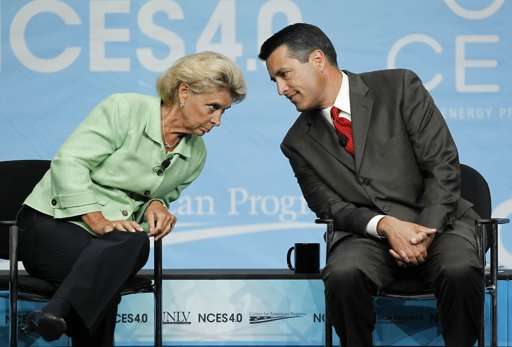 
A very important pick up for Rick Perry.


Rick Perry has picked up a key endorsement in his bid for the 2012 Republican nomination. Nevada Gov. Brian Sandoval announced late Tuesday he’ll back the Texas governor in the race, giving Perry an important show of support in a key early GOP caucus state and likely swing state in 2012.

The move isn’t so surprising: Perry and Sandoval have long been considered close political allies. But Sandoval’s endorsement is a blow to Mitt Romney’s campaign.

The former Massachusetts governor won the Republican caucuses in the state in 2008 and needs a win there again next year to further his hopes of winning the 2012 nomination.

Romney had been wooing Sandoval for months in hopes of securing an endorsement. Indeed, Romney has spent more time in Nevada than his rivals in recent months, visiting the state just last week where he delivered a speech in North Las Vegas detailing his jobs plan. The ex-governor has received the backing of two other key Republicans in the state—Lt. Gov. Brian Krolicki and Rep. Joe Heck, who both backed him in 2008.

But since joining the race last month, Perry has suggested he wouldn’t cede the state to Romney. Sandoval’s support is a major boost for the Texas governor, given how popular the top Nevada official is with GOP voters in the state. Sandoval is also considered a rising star in GOP political circles and, as a Hispanic, could help with Perry’s push to woo Latino voters.

“Gov. Rick Perry has the strongest record of job creation, fiscal discipline, and executive branch leadership among the presidential candidates,” Sandoval said in a statement Tuesday.  “As a governor, Rick Perry created a tremendous blueprint for job creation and as president, I know he will get America working again.”

This will force Romney to defend Nevada where every one considered him a favorite to win the caucuses. There is a large LDS Mormon population in Nevada and they considered to all come out for Mitt Romney.

Rick Perry will probably test a television media strategy that will carry him into South Carolina and Florida in the following few weeks after the Nevada caucuses.

The Hispanic link with Sandoval cannot be go unrecognized as Perry has been accused by conservative pundits as being soft on illegal immigration, after signing a Texas Dream Act in Texas that gives reduced college tuition to the children of illegal immigrants. The question remains as to whether Romney will call out Perry on immigration in the Nevada campaign.