Slightly more than half of rank-and-file Republicans and Republican-leaning independents favor the idea of eliminating certain corporate tax deductions as a way to pay for a jobs creation bill. Forty-one percent of Republicans favor raising taxes on higher-income Americans. Democrats strongly favor both proposals for paying for the cost of the jobs bill.

Not really a surprise because nobody considers themselves rich. But, how  can anyone possibly think this will lead to job creation?

Americans agree with a number of the job-creation proposals included in Obama’s jobs plan — specifically including the ideas of providing tax cuts to small businesses; providing additional funds for hiring teachers, police officers, and firefighters; and giving tax breaks to corporations for hiring the long-term unemployed. Slightly less than half favor reducing Social Security taxes for workers and employers. 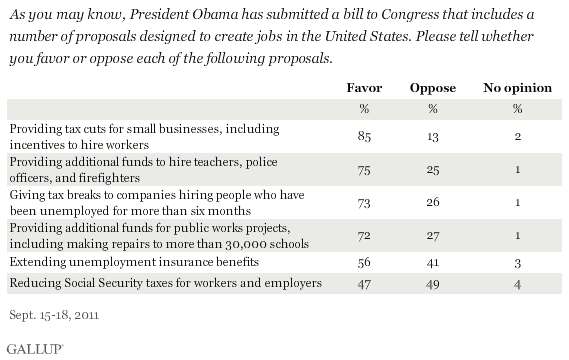 This is the second Gallup survey conducted in the last two weeks showing that the American public broadly supports Obama’s jobs plan. A majority of Americans interviewed this past weekend believe the plan would help at least a little to create jobs and improve the economy.

Many of the proposals embedded in the plan receive majority support, and Americans strongly endorse the idea of paying for the plan by raising taxes on higher-income individual taxpayers and by eliminating tax deductions for some corporations. While Republicans are considerably less positive about the potential efficacy of the plan than are Democrats, a majority of the former favor a number of Obama’s proposals, and also favor eliminating tax deductions for corporations to help fund the plan.

But, the real question is whether these proposals work? Will any jobs be created?

Popularity may win you votes, but not necessarily produce an improving economy.