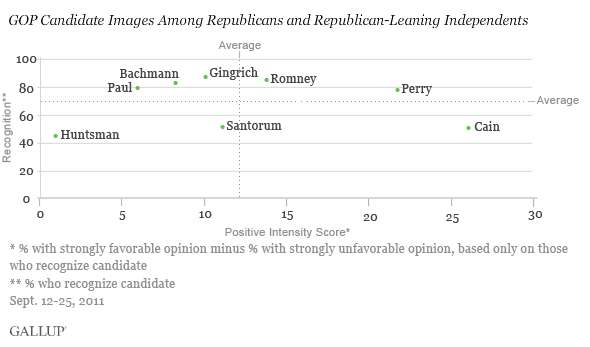 
Herman Cain’s image among Republicans familiar with him is more intensely positive than any other Republican presidential candidate’s, but his 51% name recognition continues to rank near the bottom of the field. Among the better-known candidates, Rick Perry has the strongest positive image.

Cain is attracting increased media attention after pulling off an upset in the Florida straw poll on Saturday. Much of the interviewing in the latest data, spanning Sept. 12-25 Gallup Daily tracking, was conducted before that win. However, Cain has consistently ranked near the top of Gallup’s positive intensity list this year. His current score of 26 is just below the 28 he registered on two occasions, which is the highest Gallup has measured for any GOP candidate.

Cain’s popularity is largely due to the fact that Cain has concrete proposals (e.g. his 9-9-9 plan) and is able to articulate them well. And, he is not a typical POL.

But, he is an outsider in an inside game and will not be able to put together the money nor the organization to help him win elections.


Cain’s win in Florida may not be surprising in that he has always had a relatively small but intense following among Republicans, the kind of group that can propel a candidate to win a straw poll vote. His win may make him the new “flavor of the month” in the GOP nomination contest, which was the case for Bachmann in June after the first major candidate debate and for Perry in August after he officially announced his candidacy.

That status is not necessarily welcome news, though, as increased attention begets increased scrutiny, which can lead to increasingly negative views of the candidate. For example, Bachmann’s current Positive Intensity Score of 8 is one-third as large as her score of 24 in late June. And though Perry remains among the most-liked candidates among those familiar with him, his score is beginning to show some signs of decline as his opponents have made his record and past statements a central theme of the campaign in recent weeks.