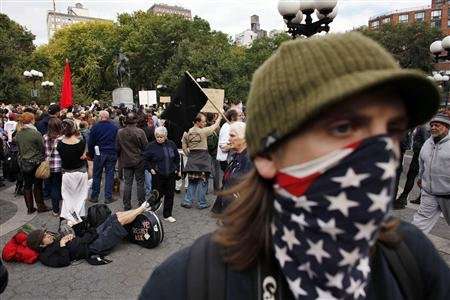 Protesters and members of Occupy Wall Street wait for the start of the march, during an annual demonstration calling for a stop to police brutality in New York October 22, 2011

According to the latest CNN Poll.

Although most Americans don’t trust Wall Street, that hasn’t translated into full support –or understanding– of the Occupy Wall Street movement. Despite large majorities who think that Wall Street bankers are greedy, overpaid and dishonest, four in ten don’t have an opinion about the weeks-long protests, according to a new CNN/ORC International poll released Monday.

Over time, opinions about the financial center of the U.S. have gotten worse. In the 1990s, only 30% of the country said they had no trust at all in Wall Street to do what is best for the economy, 24 percentage points lower than now.

Pretty much what I would expect. Most Americans are too caught up in their own lives to involve themselves in a protest movement in which there are NO clear goals or objectives.

Although this “occupation” may last a while, eventually it will just flame out with NO real impact. What will have an impact will be the Presidential race for 2012 which starts in the first week of the New Year with the Iowa GOP Caucuses.

The entire poll is here (pdf).