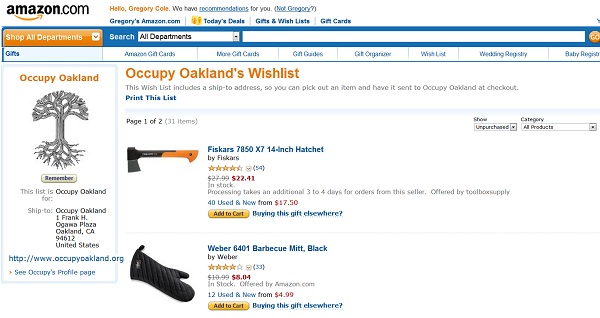 No, I am not making this up.

The Occupy Wall Street protesters who have had the run of Oakland’s streets lately have an Amazon.com Wishlist.

Really… and it is here.

Guess they need these goods for their general strike, which they have called on November 2nd.

After Occupy Oakland protesters reconvened at Frank Ogawa Plaza Wednesday night and voted to organize a city-wide general strike on November 2, a jubilant crowd poured out into the city streets, dancing and cheering.

But their attempts to head across the bay to join the Occupy San Francisco group were thwarted by BART officers, who shut down the 12th Street BART entrance as protesters–including those towing a giant stereo system on wheels–tried to make their way into the station. For about ten minutes, protesters chanted “Police brutality!” and “This is what democracy looks like!” at the BART officers before moving on to the 14th Street and Broadway intersection.

The crowd then massed itself into an impromptu march that took protesters past the Glenn E. Dyer detention facility at 7th Street and Washington, then back up Broadway, and then down to San Pablo Avenue near the Greyhound bus station, where they waved to security guards to come join them and passing cars honked in support. They passed West Grand and then circled back towards downtown.

Police officers, some in riot gear, were stationed near the jail as well as at 12th Street between Broadway and Franklin, and at San Pablo and West Grand, but officers did not interact with the marchers. When a few protesters stopped to face the officers or take their pictures, other marchers chided them, crying “Get back in the march!” and “Do not provoke!”

The marchers played music as they went, dancing to hits by the Jackson 5 and Missy Elliot, forming a line that at 11:45 pm filled the street for several city blocks.  As they continued along city streets, police cars and motorcycles appeared to be accompanying them along parallel side streets, monitoring their progress block by block without directly interfering.

Protesting in the 21st century – what would Saul Alinsky think?