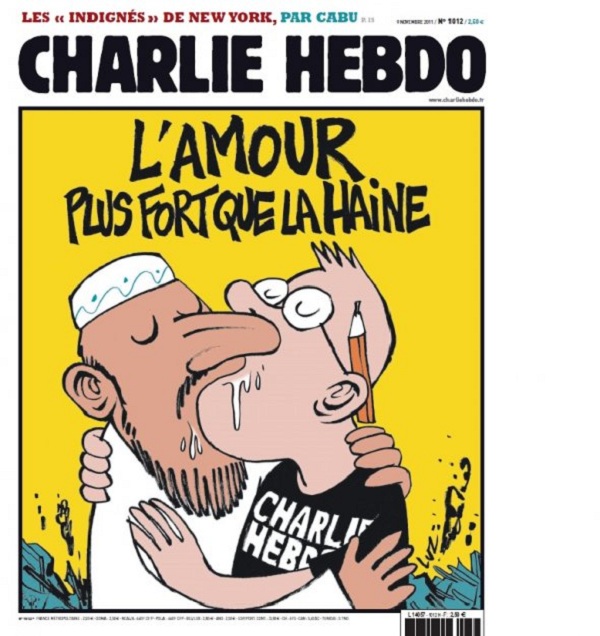 Showing no fear after getting its offices firebombed soon after printing an issue ridiculing radical Islam, French satirical magazine Charlie Hebdo, has fired back with a cover depicting a gay Muslim man passionately kissing another man under the headline: “L’Amour plus fort que la haine,” French for “love is stronger than hate.”
Charlie Hebdo is a caustic and controversial satire magazine that uses vulgar humor and illustrations to lampoon anything its writers and artists feel is fair game, usually in the realm of politics and religion, with everyone at equal risk of being a target. French president Nikolas Sarkozy is perpetually ridiculed in its pages, as well as leftist politicians like Dominique Strauss-Kahn. Recently, a cover had a drawing of the Bible, Koran, and Torah swirling in a toilet bowl with a headline that read: “In the toilet, all the religions.”

So, when the magazine’s editors recently announced that Muhammad would be a “guest editor” and the magazine was temporarily renamed “Charia Hebdo” (a play on the word, “Sharia”), it was according to protocol. However, as is well-known, depicting Islam’s prophet Muhammad is extremely offensive to some Muslims, and there has been violent retaliation, evidenced by the infamous 2005 Danish cartoon scandal in which riots flared up as a response to a newspaper’s publications of cartoons ridiculing Muhammad.

Since then, other newspapers and media outlets have adopted self-censorship when it comes to images of Muhammad, such as Comedy Central choosing to edit out the image of Muhammad in a “South Park” episode in 2006 and Yale University choosing not to include the Danish comics of Muhammad in an anthology of controversial cartoons entitled, “The Cartoons that Shook the World.”

Charlie Hebdo, however, was undeterred, and published its “Charia Hebdo” with a drawing of a bearded Muslim man on the cover (there was no specific reference to Muhammad), saying “100 lashes if you don’t die of laughter.” Inside were caricatures and comics that mocked the recent events in Libya and Tunisia where certain Sharia laws are being implemented and Islamist politicians getting elected.

Stephane Charbonnier, editor-in-chief of the humor magazine, told reporters: “What motivated us to publish this edition were events in Libya and Tunisia. It was a joke. The idea was to imagine a world where Sharia would be applied, but as everyone says to not worry about Libya or Tunisia, we wanted to explain what a ‘soft’ version of Sharia could look like.”

And, what was the result of Charia Hebdo?

The French magazine had its website hacked,death threats to employees and their office was completely destroyed by a firebomb (nobody was injured).

But, undeterred Charlie Hebdo is now come out with the gay Muslim man cover. Some say this is Muhammad, but it has not been confirmed.

What could possibly go wrong?