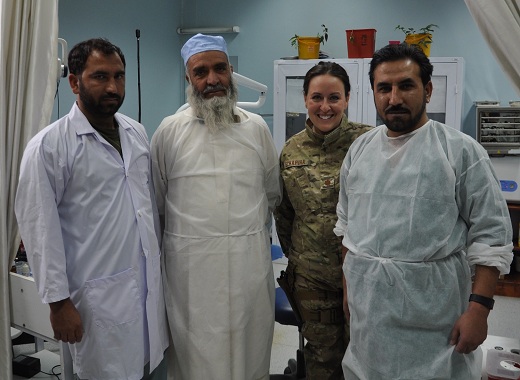 Maj. Courtney Schapira poses with, from left, dental technician Nasir, dental clinic chief Dost Muhammad and dentist Janat at Forward Operating Base Lightning. Schapira is currently on a six-month deployment in Afghanistan as the Chief Dental Advisor at Paktia Regional Military Hospital in Gardez and is from the 628th Medical Group at Joint Base Charleston, S.C (Photo by Staff Sgt. Sarah Martinez)

Here is a nice feature story about one of our military dentists in Afghanistan.

In a remote valley of war torn Afghanistan, a Joint Base Charleston Airman is playing a vital role enhancing the country’s practice of dentistry.

Major Courtney Schapira, from the 628th Medical Group at JB Charleston – Air Base, is currently assigned to the Medical Embedded Training Team at Forward Operating Base Lightning as the Chief Dental Advisor at Paktia Regional Military Hospital in Gardez, Afghanistan.

“Our team is made up of 21 medical advisers from different NATO countries,” said Schapira. “We each have our own areas of expertise such as internal medicine, nursing, pharmacy, etc.”

Schapira deployed in November 2011 and is the first and only dental adviser assigned there.

“The Afghan dentists that I work with are excited to have a U.S. dental advisor and are eager to learn from me,” said Schapira. “They are asking questions and taking the initiative to do things on their own.”

Paktia Regional Military is an Afghan National Army hospital that only treats ANA, Afghan police and civilians with combat-related injuries.

The standard of dental care in Afghanistan is much different than in the United States. The clinic is not current with modern preventive dentistry.

According to Schapira, the dentists are very skilled and adequate at their profession, however, their techniques, materials and thought processes behind their treatments are out-dated.

“The dentists here used to rarely make patients numb prior to treatment,” said Schapira. “This is both painful for the patients and can turn what may be a single appointment in the U.S. into two or three appointments here, simply because the patients can only tolerate so much pain. Since my arrival, they now numb patients prior to any surgical procedure.”

During her first few weeks in Afghanistan, Schapira felt overwhelmed by the challenges facing her. Her efforts were divided in multiple directions. Supplies, non-working equipment, outdated techniques, infection control and patient administration all needed her attention.

“I realized I couldn’t improve everything at once,” said Schapira. “So, I set goals for myself and for the clinic. After most of the equipment was modernized, so I turned my focus to the supply inventory.”

Thank you Major for your service!