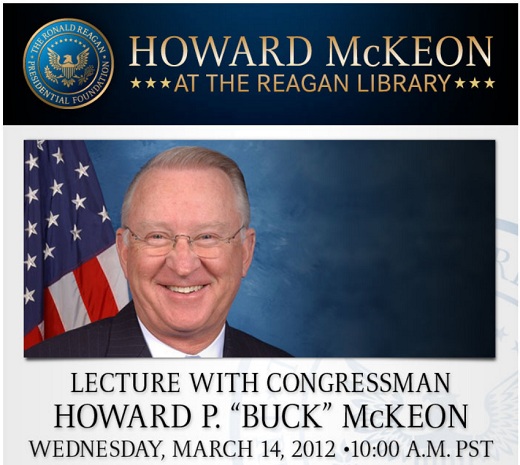 I suppose Rep Buck McKeon will discuss his Afghanistan Surge proposal at this speech.

With some calling for a rush to the exits in Afghanistan after two weeks of heightened violence, the Republican chairman of the House Armed Services Committee is looking to add troops into the mix. The bill, should it gain traction, could force the U.S. to change its current drawdown plans.

California’s Rep. Buck McKeon introduced a new bill that calls for U.S. military to guard U.S. entities, replacing the thousands of private security guards and Afghan nationals that are currently being used.

In calling for the bill, McKeon notes increasing incidents of Afghan military attacking U.S. and NATO troops. Afghan soldiers and government workers have murdered six American troops since the news that U.S. troops accidentally burned some Qurans and religious material. In the last five years Afghan forces have attacked NATO troops nearly 200 times, killing at least 70 coalition troops and wounding more than 100. An Army report declassified last year found that American troops think Afghan forces are dangerous and unstable. And many Afghan soldiers and police “demonstrated a general loathing of US soldiers.”

The bill does not specify the number of troops needed but a congressional aide told Security Clearance that the expectation would be that it would not need to be a one-for-one swap of U.S. troops for Afghanistan and private security guards because “American forces would be far more capable and efficient.”

The legislation does allow that if the President does not want to add troops, he would have to certify that using Afghan nationals and private security contractors would provide a level of security equal to what would be provided by U.S. troops.

The President will never allow Congressman McKeon to dictate to him on the Afghanistan issue. Nor, would Democrat Senate majority leader ever allow this bill come up for a vote in the U.S. Senate, even if it passed the House.

So, what is the real reason for this bill?

I will have a post up later on this military father, Dante ACosta, who will be running against Buck McKeon in the June primary election.