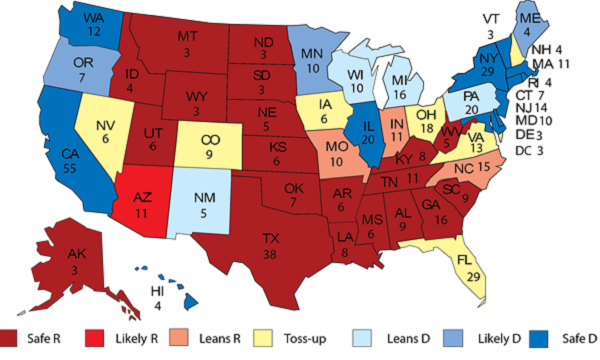 Larry Sabato lays out the Electoral College analysis for the race for the Presidency in 2012.

The London Olympics isn’t the only venue for world-class sport this year. Political gold is waiting to be won in November, and the only way to grab the top U.S.A. medal is to master Electoral College math. It is both deceptively easy and maddeningly complex. A candidate has to accumulate 270 votes in a tiny universe of 538, but those 538 will be generated by 130 million votes cast in 51 separate entities. A game that looks like checkers is really multi-dimensional chess.

Still, the deep polarization of party politics has simplified the process somewhat. Remarkably, about 40 states — and maybe more — have almost no chance of flipping from one party to the other in the 2012 Electoral College. If President Obama gets his way, the electoral map will look very close to the way it did four years ago; on the other hand, Mitt Romney needs to flip a relative handful of states to take up residence at 1600 Pennsylvania Ave.

Obama’s 2008 performance was close to the high-water mark for a modern Democrat: 365 electoral votes (359 under the new 2010 census apportionment). Obama did the seemingly impossible by very narrowly pulling two long-time Republican states, Indiana and North Carolina, to his column and even winning an electoral vote in Nebraska’s Second Congressional District, while narrowly losing Missouri and Montana. Those latter two states are widely believed to have moved out of his reach for 2012.

It is a little-known Electoral College tidbit that a president reelected to a second term has always added a state to his coalition that he did not win during his first successful run. Sometimes, in the early days of the Republic, it was a state that didn’t exist during a president’s first bid. But it appears that Obama, if reelected, will break this trend. The only state John McCain won that Obama appears to have a chance of flipping is Arizona, but that is a long shot that would require a massive turnout effort by the Obama campaign among Hispanic voters.

To compare 2012 politics to war for a moment, the current electoral map is akin to World War I’s Western Front trench warfare: Massive amounts of manpower and resources will be needed to move the frontlines even a smidgen. And the less the lines move, the better it is for Obama.

Read all of the post, which is in line with my previous analysis. Watch the video embedded below:

It looks to me that the battle will be waged in even fewer states – Ohio, Virginia, Nevada and Florida. Voters in those states should feel the brunt of all of the intense ad campaigns.

In any case, here is my prediction of how the Electoral College will turn out in November: Romney 275 Vs. Obama 263:

2 thoughts on “President 2012: Larry Sabato Lays Out the Electoral College Battle for the White House”