Michael W. Davis, DDS has an interesting piece in Dentistry Today about the American Dental Association and its future.

We are fast approaching the five-year anniversary date of the now famous report by Dr. Mike Barr, “The Inevitable Death of the American Dental Association,” published on The Dental Warrior. This wakeup call was widely discussed by doctors on The Dental Warrior, and also DentalTown.

I have not been a member of the ADA for a number of years, as the California Dental Association increasingly weighed into left-wing California State politics. The mandatory political dues requirement was one of many last straws that forced me out the door – after two decades plus of membership.

Will the ADA survive?

The jury is still out……. 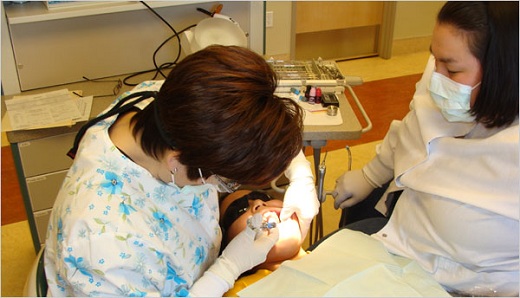 “These studies represent a new way of examining whether midlevel providers are an economically viable way to improve access to dental care for underserved populations,” said ADA President William R. Calnon, DDS. “They are a first step, and not the last word. But certainly, lawmakers and public health authorities should consider the factors examined in the studies carefully before rushing to create dental providers that may be unable to fulfill their intended purpose of reducing oral health disparities.”

The studies, performed by ECG Management Consultants, examine practice parameters in five states where adopting one or more of these models has been under discussion in the legislature or the public health community. ECG produced separate reports for the five states, 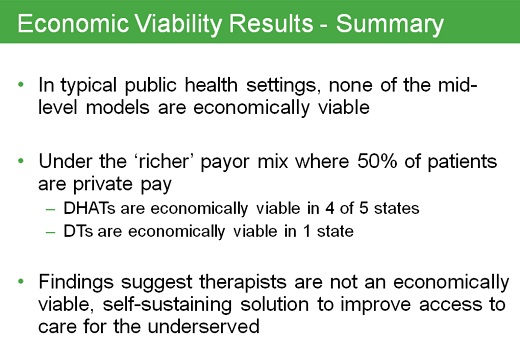 ECG based its modeling on the length and cost of training of each midlevel position, operating costs, likely salaries, academic debt, and projected revenues. Researchers considered each model in the context of various combinations of public, sliding-scale, and private fee schedules. (The fee schedules varied by state.)

Of the 45 scenarios modeled (three payer mixes for each of three practice models in five states), only five indicated positive net revenues, ranging from $8,000 in Kansas to $38,000 in Connecticut, assuming a 50/50 mix of public and private fees. Four positive net revenue scenarios involved the Dental Health Aide Therapist model; one involved the Dental Therapist model. The other 40 scenarios showed net losses ranging from $1,000 for a DHAT operating on a 50 public/50 private mix in Washington to $176,000 for an ADHP practicing in the same state, assuming a 75/25 public/sliding revenue mix.

“It is critical to understand that oral health disparities are a complex set of problems requiring an integrated set of solutions,” said Dr. Calnon. “Medicaid reforms, community water fluoridation, oral health education and helping people overcome cultural, geographic and language barriers are critical components of this. The ADA believes that allowing nondentists to perform irreversible surgical procedures is the wrong way to go. And based on these studies, midlevel dental providers would in most settings be unable to generate sufficient revenue to sustain themselves absent a continual source of financial underwriting. Given the current budget constraints at every level of government, and the already insufficient financing for dental care in most states, midlevel providers do not appear to be viable.

“Certainly, this research is not all-encompassing. But to our knowledge, no one has considered the question this comprehensively. The ADA encourages all stakeholders to study these models comprehensively, to avoid wasting constrained resources on programs that ultimately are not sustainable. We welcome others who are interested in breaking down barriers to oral health to join us in delving further into how best to maximize limited available resources—and advocating for increased resources—to improve the oral health of the tens of millions of Americans—including as many as one-quarter of the nation’s children—who live without adequate access to regular dental care.”

I was invited to an American Dental Association webinar and the screencap summary chart above was taken from the presentation.

A link to the embargoed summary report is here.

I will have more later, after digesting the reports and the webinar presentation.