Arianna Huffington’s latest venture and one into the blogosphere, The Huffington Post, is now gold and alive.

Check it out here.

The jury is out on how or if this will impact the media. 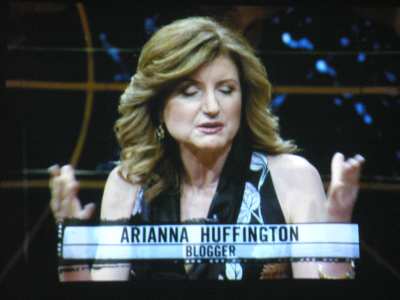 For a commentary and/or trackback site go here.

Hugh Hewitt has his take on the site here and Fraters Libertas has a run down here.

Read this funny inside review here:

Judging from todayâ€™s horrific debut of the humongously pre-hyped celebrity blog the Huffington Post, the Madonna of the mediapolitic world has gone one reinvention too far. She has now made an online ass of herself. What her bizarre guru-cult association, 180-degree conservative-to-liberal conversion, and failed run in the California gubernatorial-recall race couldnâ€™t accomplish, her blog has now done: She is finally played out publicly. This Web-site venture is the sort of failure that is simply unsurvivable, because of all the advance publicity touting its success as inevitable. Her blog is such a bomb that itâ€™s the box-office equivalent of Gigli, Ishtar and Heavenâ€™s Gate rolled into one. In magazine terms, itâ€™s the disastrous clone of Tina Brownâ€™s Talk, JFK Jr.â€™s George or Maer Roshanâ€™s Radar. No matter what happens to Huffington, itâ€™s clear Hollywood will suffer the consequences.

It almost seems like some sick hoax. Perhaps Huffington is no longer a card-carrying progressive but now a conservative mole. Because she served up liberal celebs like red meat on a silver platter for the salivating and Hollywood-hating right wing to chew up and spit out.

CNet has this story:

America Online has expanded access to its blog pages, offering anyone who signs up for AOL’s free instant-messenger service the opportunity to create, read and post to the online journals, the company announced on Friday.

Company officials said that while signing up for an IM screen is a requirement for access to the previously proprietary AOL Journals section, Journals users are not required to download AOL’s client software to access the screen name. The blogs can be created in public or private modes, allowing individuals to choose whom they wish to share their online journals with.

Launched in 2003, the blog pages have since attracted more than half a million users, AOL representatives said. The company expects that by opening the service to a far wider audience, it will see that figure rise quickly.

“The blogging phenomenon grows stronger each day and has especially taken hold among our community of members,” Bill Schreiner, AOL’s vice president of community, said in a statement. “AOL Journals is one of our most popular community-building tools and has created an active forum where users can share their thoughts and opinions and participate in online discourse.”

The move marks the latest effort by the company to expand beyond its base of paying Internet services customers. For years it has offered AOL Instant Messenger (AIM) service for free to anyone willing to sign up for an account and download AOL’s desktop software. The company estimates that there are more than 20 million active users of the IM service. AOL’s primary rivals, Google and Yahoo, also maintain free blogging sites.

Flap was linked earlier in the week on an AOL blogroll and entertained many new visitors.

Welcome all to the blogosphere!

It has been reported here.

Now, Michelle Malkin has this piece on Pajamas Media Mania:

The New York Sun has an article about the effort by Roger Simon and others to launch a blogger news network:

In a dramatic sign that Web logs are going mainstream, three of the largest political blogs are banding together to form what is believed to be a first-of-its kind ad-supported network.

To broaden their appeal beyond national security issues, the three – ArmedLiberal.com, RogerLSimon.com, and LittleGreenFootballs.com – will receive editorial advice from the owner of one of the most heavily trafficked blogs, Instapundit.com’s Glenn Reynolds, among others.

The venture will be called Pajamas Media, a not-so-subtle reference to the September remarks of a CNN executive, Jonathan Klein, who said a typical blogger has “no checks and balances” and is just “a guy sitting in his living room in his pajamas.”

Impeccable timing: The news of this groundbreaking venture comes as newspaper circulation figures plummet. Here’s how to get in on the action if you haven’t already signed up.

Flap will be joining this venture and urges everyone in the blogosphere to at least check it out….here.

The New York Times has this story about the Los Alamos Nuclear Weapons Lab and the impact of their blogging:

A blog rebellion among scientists and engineers at Los Alamos, the federal government’s premier nuclear weapons laboratory, is threatening to end the tenure of its director, G. Peter Nanos.

Four months of jeers, denunciations and defenses of Dr. Nanos’s management recently culminated in dozens of signed and anonymous messages concluding that his days were numbered. The postings to a public Web log conveyed a mood of self-congratulation tempered with sober discussion of what comes next.

“Some here will celebrate that they have been able to run the sheriff out of Dodge,” Gary Stradling, a veteran Los Alamos scientist who is a staunch defender of Dr. Nanos, wrote Tuesday on the blog.

“It might be a good idea,” Mr. Stradling added, “to shut down the celebration and form a work party to clean up Dodge City, because the new sheriff will if we do not.”

The blogging comes at a delicate moment in the 62-year history of Los Alamos. The University of California, which has helped run the laboratory for the government since the days of the Manhattan Project, faces close scrutiny in Washington as to whether its contract should be renewed. And resignations and fears of a mass exodus have recently roiled the waters. Some analysts believe that now, given the public outcry, the university will have to abandon Dr. Nanos in order to make a credible bid to keep its contract…

Go directly to the blog here.

But, Matt has provided some food for thought and discussion.

Flap had the opportunity to attend “A Blogs and the Commentariat evening”, starring guest-of-honor Hugh Hewitt: author, radio host, constitutional law professor, blogger and opinion columnist, last evening at the Los Angeles Athletic Club. The announcement of the evening was previously made here.

It was a pleasure to meet many members/bloggers of the Bear Flag League.

Hugh Hewitt has posted this piece on his blog about the event.

Patterico who is pictured above with Hugh Hewitt had this to say about the evening’s festivities.

There was also a special apperance by L.A. Times Sunday Opinion editor Bob Sipchen, who edits the Times-criticizing Outside the Tent feature, and other Outside the Tent contributors were introduced including Patterico and Mickey Kaus.

Others seen in the gathering were the Boi From Troy:

And…. Flap and Justene Adamec

SoCalPundit will have photos later in the day.

New Bear Flag Member: The Gay Patriot has this piece.

Justene over at CalBog has this round-up of the evening including some criticism from the MSM and L.A. Times apologists: LAObserved and LAVoice.

Here is a new photo of the night. A much brighter one! Thanks to the Big Picture Blog: