A record-low 10% of Americans approve of the job Congress is doing, down from 13% in January and the previous low of 11%, recorded in December 2011. Eighty-six percent disapprove of Congress, tying the record high for disapproval set in December.

The new-low 10% approval rating is based on a Gallup survey conducted Feb. 2-5, about two weeks after President Obama’s 2012 State of the Union address and the reconvening of the U.S. House and Senate.

Congressional approval averaged 17% for all of 2011. The highest reading last year was 24% in May. More broadly, Gallup’s highest approval rating for Congress is 84% in October 2001, a month after the terrorist attacks on New York City and Washington, D.C.

Not really a surprise.

The American economy is not good and all incumbents are going to get a drubbing come November.


About three-quarters of registered voters (76%) say most members of Congress do not deserve re-election, the highest such percentage Gallup has measured in its 19-year history of asking this question. The 20% who say most members deserve to be re-elected is also a record low, by one percentage point.

The 76% who say most members of Congress “do not deserve to be re-elected” is six points higher than the previous high of 70%, measured in August.

The trends on this measure have been progressively more negative since 2004. Voters were also more negative than positive in response to this measure through most of the early 1990s, but at least half of voters said most members deserved to be re-elected in Gallup polls conducted between 1998 and 2004.

A substantial majority of Republican (75%), independent (82%), and Democratic (68%) voters agree that most members of Congress do not deserve re-election — a sign of rare consensus about the legislative body in which both parties currently hold a leadership stake.

And, this finding is a surprise?

With redistricting in the states finishing up, the Presidential campaigns under full swing, more members of Congress may indeed decide to retire – on both sides of the aisle. I would not want to be an incument member of Congress, having to raise money and begging constituents to vote for them while the economy is mired in a recession.

I think voter sentiment in November 2012 will be throw them all out, including Obama. 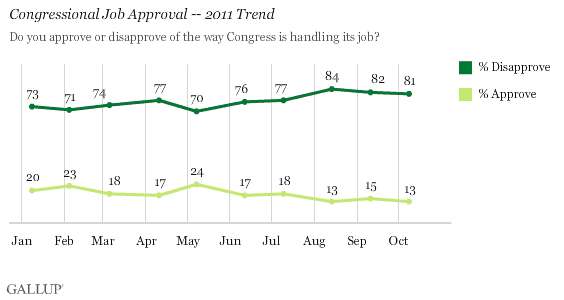 
The percentage of Americans who approve of the job Congress is doing returned to 13% in October, matching the all-time Gallup low on this measure, first recorded in December 2010 and repeated in August.

Congress’ approval has been low all year, registering below 20% each month since June. The latest results are based on a Gallup poll conducted Oct. 6-9.

Behind the recent rock-bottom ratings is subpar approval from all three party groups. Republicans’ and independents’ approval of Congress in 2011 has consistently been below 25%, and more often below 20%. After averaging 24% from January through July, Democrats’ approval fell sharply in August, to 15%, and has remained lower than that since.

Currently, Republicans’ and Democrats’ approval of Congress is identical, at 14%, similar to the 13% among independents.

Not really a surprise, as American voters are frustrated with unemployment and the terrible economy. They are especially pissed off with their elected officials who are doing nothing to resolve the problems.

The political environment is toxic for incumbent office holders and I would not want to run for re-election in 2012.


Congressional job approval is now 15%, up slightly from the record-tying low of 13% recorded in August, while disapproval is 82%, compared with 84% last month.

These results are based on interviews conducted in a Sept. 8-11 Gallup poll, as President Barack Obama urged Congress to pass his newly announced major jobs plan legislation and amid news coverage of the 10th anniversary of the 9/11 terrorist attacks.

Gallup has recorded only three measures lower than this month’s rating of 15%, although Americans have never responded very positively when asked to rate Congress. The average approval rating since Gallup first began asking Americans to rate Congress in 1974 is 34%. Congressional job approval has generally drifted downward since it reached 39% in March 2009, shortly after President Obama took office. The average congressional job approval rating for 2010 was 19%.

Last month’s 13% approval tied the record low from December 2010. The highest congressional job approval rating measured by Gallup came in the aftermath of the 9/11 attacks, with a single reading of 84% in October 2001.

I would not want to be an incumbent Representative running next year, period.


Twenty-eight percent of U.S. registered voters say most members of Congress deserve re-election, tying the low point in the trend set last year, according to a new USA Today/Gallup poll.

In early May, Gallup found 24% of Americans approving of the job Congress is doing overall, which reflected a rally in support after the death of Osama bin Laden. Congress’ approval rating had been below 20% in March and April. Nevertheless, voters’ views of Congress in 2011 — in terms of both approval and support for most members’ re-election — are no better than they were last year, despite the great turnover in the 2010 elections that led to Republicans’ taking control of the House of Representatives.

Since 1992, Gallup has typically found more voters saying most members of Congress do not deserve re-election than saying they do. Generally, when higher percentages of voters express these anti-incumbent sentiments, as in 1992, 1994, 2006, and 2010, there is much change in Congress’ membership at the next election.

Why, am I not surprised?

What is interesting is voter’s thoughts about their own Members of Congress.

Voters are more charitable toward their own Representative with 57% saying that he or she deserves re-election – only 34% say they do not.


The anti-incumbent mood that led to sweeping changes in Congress after the 2010 elections persists, and the accompanying change in House leadership has not fundamentally altered the way Americans view Congress. Thus, incumbents remain vulnerable heading into the 2012 election cycle, though perhaps not quite as vulnerable as in 2010, given that voters are now more inclined to say their own member deserves re-election.

All incumbent members of the House will be running in newly drawn districts in 2012, further adding to the uncertainty about their future. But significant turnover in Congress may be the “new normal” pattern, given that it has occurred in each of the last three congressional elections.

I would say if I were a new Republican Congressman, I would run hard in their district and not take anything for granted. Voters remain unhappy and will vote you out, if they perceive you are representing yourself and not your constituents.

Looks like equal disapproval in the latest Gallup Poll.


Congress faces difficult challenges in trying to jump-start the economy while also reining in spending as Americans grow increasingly weary of the federal budget deficit. The difficulty of these tasks is compounded by divided party control of Congress, with Republicans in the majority in the House of Representatives and Democrats controlling the Senate. To date, Congress has struggled to find agreement on long-term budget solutions, opting instead for short-term agreements to avoid a government shutdown. Its ability to do so, particularly this week, with the looming April 8 deadline to pass a 2011 budget or a continuing resolution, could play a crucial role in determining whether Americans’ views of Congress improve or deteriorate.