These dental radiograph recommendations were released on November 28.

In an effort to decrease radiation exposure to patients, the American Dental Association’s (ADA) Council on Scientific Affairs collaborated with the U.S. Food and Drug Administration to update the ADA’s recommendations for dental X-ray examinations. The recommendations were released recently.

The ADA’s “Dental Radiograph Examinations: Recommendations for Patient Selection and Limiting Radiation Exposure” are intended to be used in conjunction with dentists’ professional judgment to determine whether and when dental X-rays are needed. Dental X-rays help dentists evaluate and diagnose oral diseases and conditions, but the ADA recommends that dentists weigh the benefits of taking dental X-rays against the possible risk of exposing patients to the radiation from X-rays, the effects of which can accumulate from multiple sources over time.

“As doctors of oral health, dentists are in the best position to make decisions on whether to prescribe dental X-rays after an oral examination and with consideration of the patient’s health history. Prescribing dental X-rays should be an individualized process,” said ADA President Robert A. Faiella, D.M.D., M.M.Sc. Since 1989, the ADA has recommended the ALARA principle in relation to dental X-rays—that radiation exposure to patients is “as low as reasonably achievable.”

A downloadable copy of the recommendations can be obtained here.

All dentists should review the updated recommenations and, of course, utilize their best professional judgment for individualized care for their own patients. 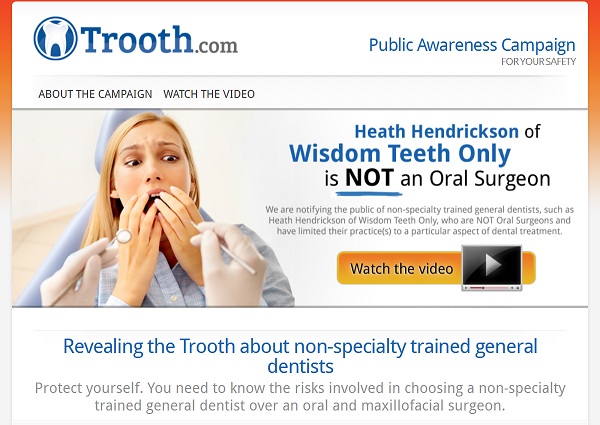 Now, Dr. Heath Hendrickson or Dr. Wisdom Teeth has released a new radio ad that very clearly states that he is NOT an oral and maxillofacial surgeon.

Will this be enough to satisfy the oral surgeons of Trooth.Com?

How about the outside window of Dr. Hendrickson’s office where picketers have again demonstrated this morning? 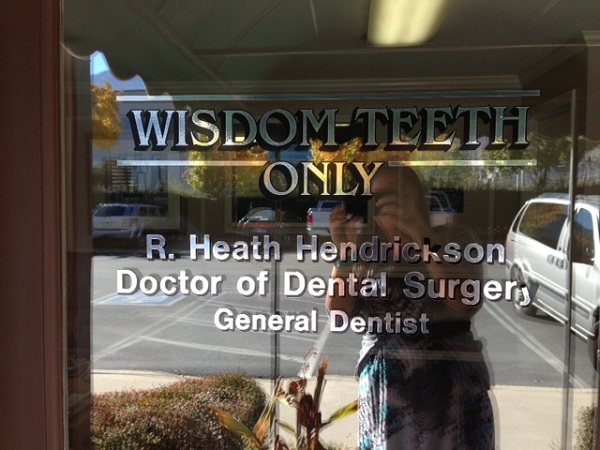 Well, I plan to ask the oral surgeons for their thoughts and comments.

If the Trooth.Com Board is concerned with Dr. Hendrickson’s marketing/advertising and that the public would be confused whether he is an oral and maxillofacial surgeon or not, then this seems to be corrected. 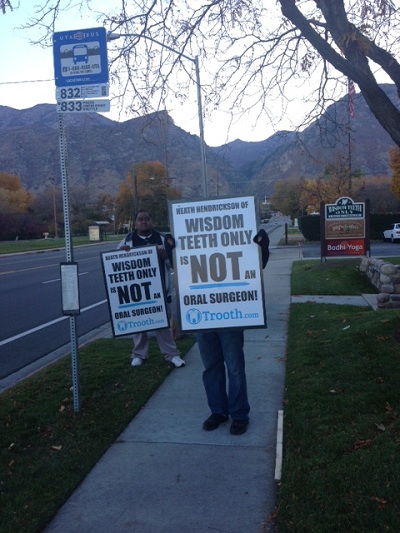 The Trooth.Com picketers that is….. 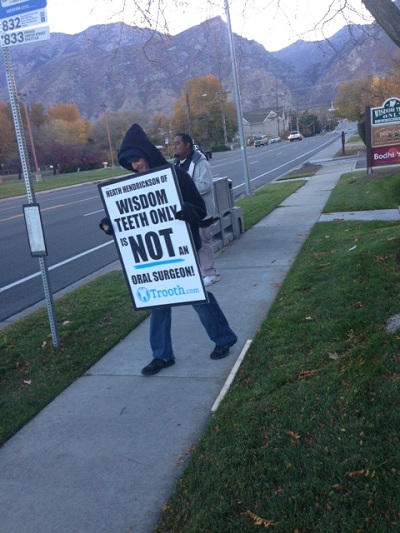 Obviously, there has been no resolution of this matter between the Trooth.Com oral surgeons and Dr, Hendrickson.

I do know there have been some sort of negotiations or discussions between each side attorneys and will post more when information becomes available.

Here is a link to my archive of posts on the Trooth.Com FLAP.

Last week, I conducted an interview with Utah Oral Surgeon Dr. David Nicholls about Trooth.Com and its public awareness campaign. The interview was posted in four parts.

Prior to beginning Dr. Nicholls’ interview, I reached out and attempted to contact all of the oral and maxillofacial surgeons on the Board of Trooth.Com. Dr. Nicholls was the first to contact me and later in the week, Dr. Tate Viehweg of Alpine Surgical Arts consented to an interview.

I continue to seek the other oral surgeon’s comments and there is an open interview request for them.

Dr. Viehweg and I began the interview on Friday and is continuing after a break (that I requested) for the weekend. I will undoubtedly break the interview down into a number of posts, since there is much material.

Part one of the interview is here.

You mentioned that you have had contact with Dr. Hendrickson’s patients in your office. Did he refer the patients to you?

Or, did these patients come to you with post-operative complications?

These patients found me either on their own, referred from another general dentist, or referred/consulted from/in the hospital emergency room – all with post-operative complications.

Without violating patient confidentiality, how many patients of Dr. Hendrickson’s have you seen with post-operative complications?

What were the nature of the complications?

Did you ever discuss the patient cases with Dr. Hendrickson?

Are you aware of any of these patients who have filed complaints with the Utah DOPL? Or, filed or plan to file malpractice lawsuits against Dr. Hendrickson?

I’ve been at my current practice for 4 years and have seen at least 4 of his patients for post-operative complications including severe post-operative infections and completion of extractions that were only partially removed, although the representation was that the entire tooth had been removed.

Geographically, there are several surgeons closer to his offices that see many more of his post-operative complications than I do.

A huge concern is that he is not readily available to his patients for their post-operative issues-this results in them going to the emergency room out of necessity and the oral and maxillofacial surgeon on call being requested to care for the patient.

To be fair, I see many similar complications from a handful of general dentists near my office who disregard even the most diplomatic of requests that they inform their patients that they are not specialists.

As I stated earlier, I have had limited interaction with Dr. Hendrickson.

I am not specifically aware of any of my patients that were at one time treated by him that are pursuing litigation against him or that have filed a formal complaint with DOPL. I suspect it is only a matter of time, if it hasn’t happened already.

It is a statement in general and not in specific regarding post-procedural care.

What has been the response to the Trooth.Com public awareness campaign?

From your oral surgery colleagues?

From the general dentists who refer to your surgery practice?

I have not had any feedback from anyone (public, surgical colleagues, general dentists) since the campaign began.

Are you aware that Trooth.Com protesters with signs picketed Dr. Hendrickson’s office on Friday?

If you are, did the Board pay them to picket?

Besides the website, billboard and picketing, will there be more to the Trooth.Com public awareness campaign? Radio ads? Direct Mail campaign?

I was aware of the picketing at Dr. Hendrickson’s office on Friday. The picketing is part of the Trooth.com campaign to inform the public of the safety issues with which we are concerned.

To my knowledge the billboard, picketing, and the Trooth.com website comprise the bulk of the campaign.

Have you read the October 19, 2012 press release issued by Dr. Hendrickson’s attorney?

It says that the Trooth.Com is conducting “a misleading fear and smear publicity campaign.”

Where does Trooth.Com go from here, in light of this comment?

I haven’t read the press release.  What is noted in the Trooth.com campaign is factual and intended only to inform the public.

You will need to reach out to Dr. Nichols for confirmation regarding the future of the public safety campaign conducted by Trooth.com.

Thank you for this opportunity to share my views. If you have any additional questions, feel free.

The interview came to a close.

It is my understanding that Dr. Wisdom Teeth, Dr. Heath Hendrickson and his wife, added two new members to their family over this past weekend.

Dr. Hendrickson has consented to an interview, when his life has a resumed a less hectic course.

As far as I know, the pickets from Trooth.Com have not returned to Dr. Hendrickson’s dental office. 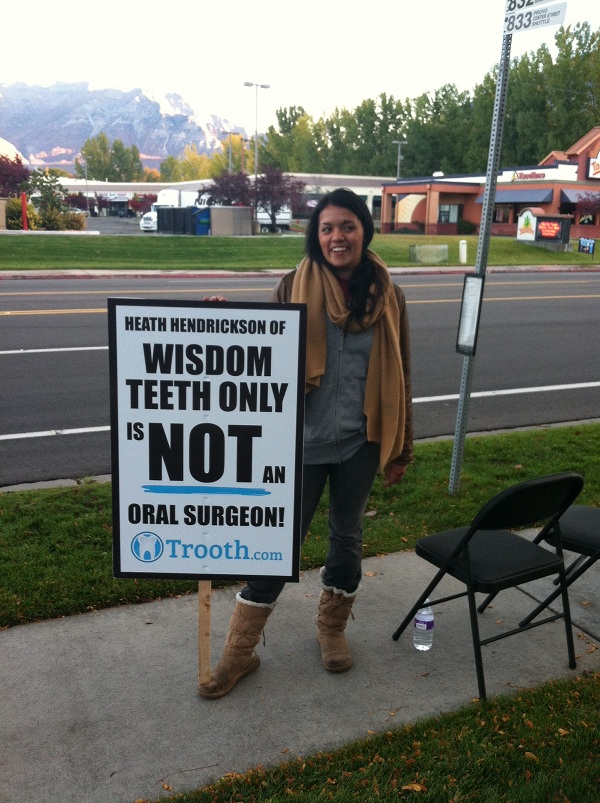 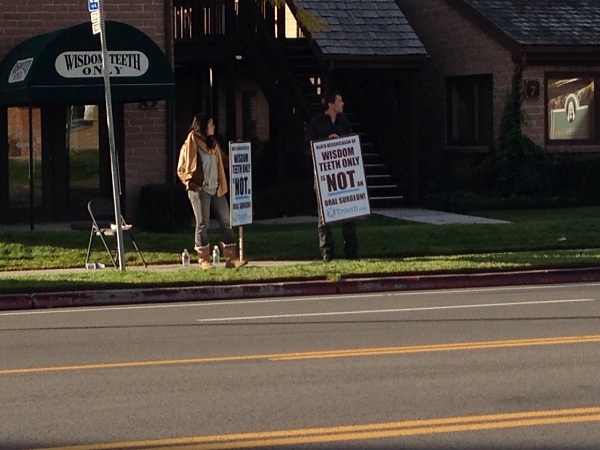 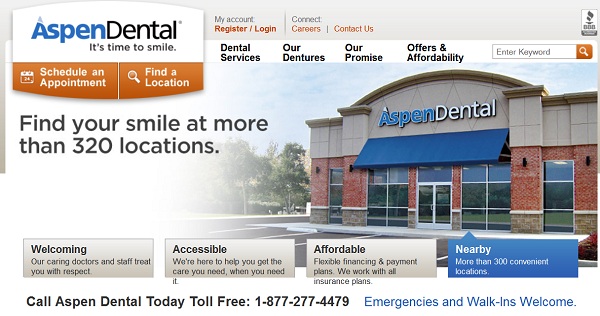 This is a federal lawsuit, filed in New York state yesterday.

Aspen Dental Management and the private equity firm that controls it illegally operate dental clinics across the country and engage in aggressive, misleading profit-driven practices that cause patients economic harm, claims a federal lawsuit filed Thursday in New York.

East Syracuse-based Aspen and Leonard Green and Partners are violating laws that require clinics to be owned by dentists actively performing procedures onsite to prevent business interests from trumping those of patients, according to court papers filed at U.S. District Court in Albany.

The suit is on behalf of 11 people in 11 states, but their lawyers are seeking class action status that could cover tens of thousands of current and former patients and untold monetary damages.

They argue that the structure of Aspen Dental puts a premium on getting patients to consent to expensive treatment plans through aggressive sales pitches after they’ve been attracted to the clinics by free exam and X-ray promotions.

Lawyers Brian Cohen and Jeffrey Norton said the goal is to maximize profits for the non-dentist owners of Aspen by using dentists as “sham” owners of clinics, some of which operate too far away, including in other states, for the dentists to practice there. That, they say, violates New York’s law against “unlawful corporate practice of medicine.”

Aspen’s “so-called ‘Practice Owners’ are nothing more than de facto employees and/or independent contractors” of the company, which controls its 358 clinics’ marketing, credit offers, hiring, training and bookkeeping, according to the court papers.

This is an interesting legal complaint since it is federal and may involve a class action across many states.

I think America is ready for the debate as to whether dentists should be the sole owners of dental practices. If not, then who will be ultimately responsible financially and for patient care.

I will cover more of this lawsuit, as it progresses.