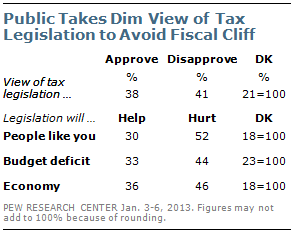 Americans have a decidedly mixed reaction to the “fiscal cliff” agreement reached by Congress and signed into law by President Barack Obama this week, with 43% saying they approve and 45% saying they disapprove. Two-thirds of Democrats approve of the agreement, while almost as many Republicans disapprove. Independents are slightly more likely to disapprove than approve.

These results are based on a one-day poll of 1,026 national adults conducted Thursday, Jan. 3, two days after the agreement was reached. The strong rank-and-file Republican opposition to the agreement appears to be in line with the opposition among Republican House members. The agreement was initially approved by a strong bipartisan vote of 89 to 8 in the Democratically controlled Senate, but passed by a much slimmer 257-167 margin in the Republican-controlled House, with 151 Republicans voting against it.

Attitudes toward the agreement are split along ideological lines, in a fashion parallel to the partisan differences. Liberals are highly likely to support the agreement, while conservatives oppose it. Moderates tilt toward approval of the agreement.

Just wait until Americans receive their first paychecks for 2013 and discover their payroll taxes have increased 2 per cent.

The Fiscal Cliff compromise was a bum deal and while President Obama succeeded in winning more taxes for the rich and others, nobody really won here. Plus, the national debt continues to rise. 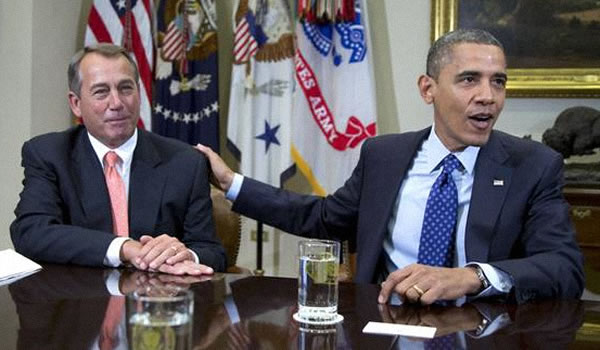 What is the best deal Harry Reid and Mitch McConnell can achieve over the next 24 hours to avoid the Fiscal Cliff?

Byron York says whatever the deal, it will end badly for the GOP.

Under the most likely scenario, Republicans will get nothing — nothing — in return for giving in on tax rates for the highest-income Americans.  No spending cuts, at least no serious spending cuts beyond what are already included in sequestration, would be part of the deal done on Sunday or Monday, if that is indeed what happens. . . .

[T]he bottom line is that the fiscal cliff fight will not end happily for Republicans.  They will have given in on what was an article of faith — that taxes should not be raised on anybody, poor or rich — in return for essentially nothing.

But, what York does not clearly explain and Ramesh Ponnuru does over at National Review does is one LARGE failure of the Republicans.

They LOST the election in 2012 and are essentially boxed into a NO WIN scenario.

What would Republicans get out of a deal? A reduction in scheduled tax increases; the avoidance of a fight with Obama that would be structured in a way that lets him get to Republicans’ right on middle-class taxes and posture as the biggest tax-cutter since Reagan; and that’s about it.

Republicans had two ways of avoiding this scenario. They could have passed smaller tax cuts in 2001 and 2003 but not given them expiration dates. Or they could have done better in the last few elections. At this point it’s hard to see what strategy would undo the effects on the budget from that mistake and that failure.

The House GOP can go along with whatever McConnell-Reid’s deal is or go over the Fiscal Cliff. Remember everyone will have higher tax rates if we go over the Cliff, including the AMT.

At this point, extending the Bush tax rates for everyone, except for those over $400K is probably the only choice.

When Bill Kristol announced a similar strategy a few weeks ago, everyone on the RIGHT cried sell out.

Now, it appears to be the only game in town.

So, the House GOP should accept the deal or be willing to go over the Cliff and endure the wrath of outraged American taxpayers when their first 2013 paycheck is much smaller.

The 2014 election for the United States Senate and GOP control has already started.

Crossroads GPS, a GOP Super PAC is up with radio ads targeting Democratic Senators who reside in Red States.

Since the President continues to campaign, promote upper income tax increases and since he has lent his campaign e-mail list to the Fiscal Cliff campaign, I guess the GOP effort is in response.

A balanced plan includes more than just the massive tax increases President Obama is insisting Congress pass, and these U.S. Senators should lead by pushing for significant spending cuts,” Crossroads GPS president and CEO Steven Law said in a statement. “It is up to these U.S. Senators to push President Obama and Harry Reid to show real leadership by negotiating a balanced plan which stops Washington spending and helps our economy.

“Call your members of Congress. Write them an email. Tweet it using the hashtag #My2K.” —President Obama

The President went on a PR offensive with his tweet and hashtag this morning.

And, conservatives have gone on the offensive.

The White House’s ‘My2k’ hashtag campaign is a success on Twitter, trending nationally on Wednesday and stirring up debate over the upcoming tax rate deadline. But conservatives are fighting back, appropriating the hashtag and arguing their side of the debate.

The #My2k hashtag began trending nationwide on Twitter on Wednesday morning when senior members of the administration — in a coordinated effort — began tweeting about the hashtag campaign. Use surged anew after President Obama’s speech about extending middle-class tax rates, when he urged supporters to call, write, tweet at and post on the Facebook walls of their members of Congress.

But, all Speaker Boehner and the House GOP leadership have to do is pass a bill.

As I said before.

There you go – very expedient.

But, so far, Speaker Boehner appears to be tone deaf – even from members of his own party, like Rep. Tom Cole.

Plus, Obama’s effort is actually funny: