This will probably not do too much for Newt Gingrich in Florida on Tuesday. But, Gingrich is now playing a delegate game with Romney, much like Ronald Reagain in 1976 against Gerald Ford. The difference is that Romney is not an incumbent President.

Herman Cain on the stump will help Gingrich in many states and bring along plenty of Tea Party supporters.


Herman Cain’s Positive Intensity Score is 17, down from 29 immediately before news broke in late October about past sexual harassment allegations against him. Newt Gingrich, who has made a dramatic turnaround since the summer, saw his score improve further this week, and he now ties Cain for the highest score among the eight major GOP presidential candidates.

The current ratings are based on Nov. 1-13 Gallup polling, covering a fairly newsworthy time in the GOP campaign. Cain continued to be dogged by allegations that he sexually harassed women while he was head of the National Restaurant Association in the late 1990s. Also, the eight major candidates met for two debates, the first of which will be remembered for Rick Perry’s memory lapse while he was trying to list the names of federal cabinet departments he would shut down if elected.

No surprise here. This is the conventional wisdom – Newt is rising.

Now, whether Gingrich can sustain his increasing poll numbers is another matter.

Here is the positive intensity graph:

Chris, it will make no difference of a Clinton Vs. Cain comparison. Herman Cain is already falling in the polls and would not have beaten Mitt Romney in any case.

Herman Cain can now go back to the speaking circuit and sell some books – or even retire.

Most voters now say that the sexual harassment allegations made against Herman Cain may be both serious and true. At the same time, two-thirds believe Cain’s ethics are at least as good as most politicians. The latest Rasmussen Reports national telephone survey finds that 51% of voters nationwide say it is at least somewhat likely the allegations against Cain are both serious and true.

The survey of 1,000 Likely Voters was conducted on November 7-8, 2011 by Rasmussen Reports. The margin of sampling error is +/- 3 percentage points with a 95% level of confidence.

I tweeted yesterday that it was my opinion that Herman Cain was DONE.

I think you can say that American voters agree. 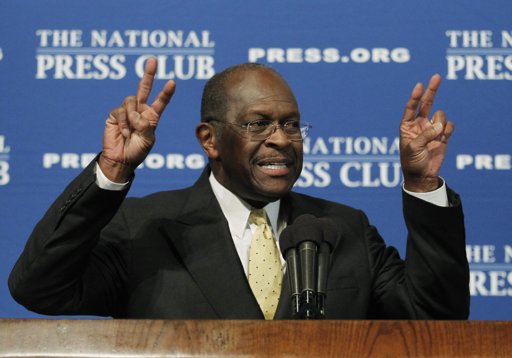 Republican presidential candidate Herman Cain speaks at the National Press Club in Washington, October 31, 2011. Cain acknowledged on Monday that he was accused of sexual harassment in the 1990s but insisted the allegations were baseless, as he grappled with the toughest challenge of his U.S. presidential campaign

Sometimes it is wise, if you are going to say an accusation is without merit, then to leave it at that and not explain.


Republican presidential candidate Herman Cain for the first time has offered a detailed recollection of what led an employee of the National Restaurant Association to lodge a sexual harassment charge against him when he was CEO of the organization.

Cain spoke in response to detailed questioning from Fox News’ Greta van Susteren, who led Cain through the facts of the case in an extended interview.  That interview was taped to be shown on Fox Monday night.

But, with Cain going public to try to explain the situation, he is digging a hole for himself. Why?


For most executives in this position, she said, it is only natural to inquire after the fact as to the outcome — even if it’s just to say, “Hey, what happened with that, and why are these ladies no longer here?”

In any case, she said, the National Restaurant Association could clear up questions by releasing the basic information about the case by speaking about the facts, without identifying the women. “They can be much more transparent than they are being,” she said.

Ms. Katz suggested that Mr. Cain might be creating new problems for himself through his recent comments “by suggesting that these are trumped-up charges.” Settlements commonly include nondisparagement clauses that he could be violating she said. “He’s either breached the agreement or he’s exposing himself to allegations of defamation,” she said.

Because of the risks, she said, lawyers were probably not involved in crafting his statements about the allegations. “I don’t think anybody’s advising him to say that,” she said.

Anyone want to bet that one or both of these women are sitting in their lawyer’s office contemplating either a new suit or complaint?

If he claims that the complaints are baseless, then say that and move on.

If something, like a gesture, was misinterpreted, apologize and move on.

So far, Herman Cain, has failed crisis management 101 AND he wants to be President? 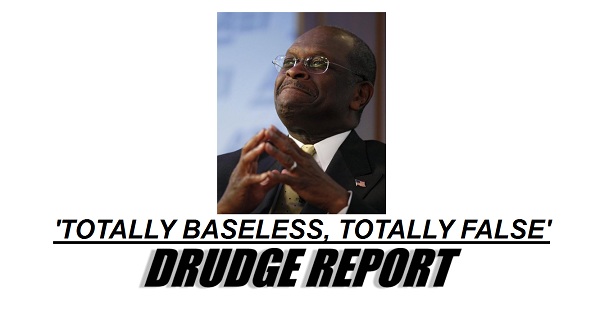 According to Herman Cain in an interview on the Fox News Channel.

2012 GOP presidential candidate Herman Cain said he was “falsely accused” of sexual harassment while he was head of the National Restaurant Association.”It is totally baseless and it is totally false,” he told Fox News.

“I’ve never sexually harassed anyone and yes, I was falsely accused while I was at the National Restaurant Association. I say falsely because it turned out after the investigation to be baseless. …It is totally baseless and totally false. Never have I committed any sort of sexual harassment.”

Herman Cain also said he was not aware of any settlements that were made by the National Restaurant Association on his behalf.

There will be more questions, especially with regard to the settlement(s).