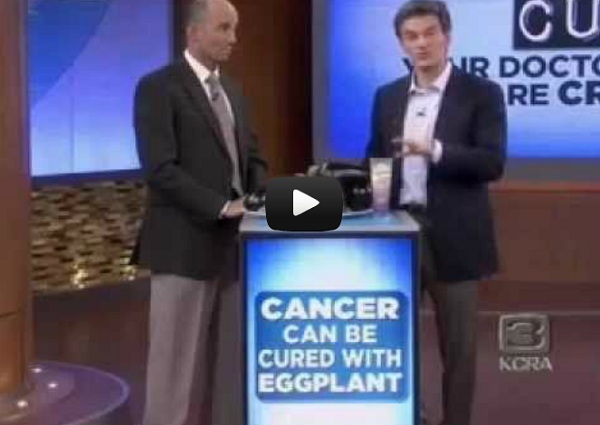 “Doctor” Joseph Mercola on the Left who has donated at least $1.1 million to support California Proposition 37

The Los Angeles Times this morning and “LEFTY” Sockpuppet writer Michael Hiltzik, no less, have a piece up decrying California Proposition 37.

You remember the issue, right?

Love it or hate it, the one thing you can say for sure about California’s ballot initiative process is that it’s the absolute worst way to craft policy dealing with complex scientific issues.

That doesn’t stop advocates on one side or another from constantly trying, with the result that the public’s understanding of the underlying facts plummets faster than you can say, well, “Proposition 37.”

Proposition 37 is on November’s ballot. The measure would require some, but not all, food sold in California and produced via genetic engineering to be labeled as such. (There are exemptions for milk, restaurant food and other products.)

Genetic engineering, or genetic modification, which involves manipulating DNA or transferring it from one species to another, is increasingly common in agriculture and food processing, and wouldn’t be banned or even regulated by the measure. Genetic engineering has pluses and minuses. It can increase crop yields and pest resistance. But it can also affect the environment in negative ways — pollen or seeds from genetically engineered crops can be spread by wind, birds or insects to territory where they’re unwanted, for example.

Once you’ve said that, you’ve said pretty much everything that’s known to be relevant to Proposition 37. The rest is baloney, of the non-genetically engineered variety.

It includes more information on the health nut, Dr. Joseph Mercola which is seen on television trying to persuade people to treat cancer with an eggplant extract which he hawks:

More from the Los Angeles Times:

Something else voters should be aware of is who’s backing Proposition 37. The biggest donor is Joseph Mercola, who with his companies has contributed at least $1.1 million so far. The smooth-talking Mercola’s Chicago-area company and clinic make millions from hawking “organic” nostrums and casting doubt on medical science. He’s attracted regulatory warnings from the FDA on three occasions, most recently for touting thermography as an alternative to mammograms for breast-cancer screening. Medical science regards this as dangerous advice because thermograms aren’t effective in identifying many tumors, while early detection via mammograms has saved the lives of millions of women. A Mercola spokesman says he has “worked with the FDA to resolve all concerns.”

Mercola also backs a campaign against child vaccination, and not only promotes sun exposure as a health benefit but also conveniently sells tanning beds and booths on his website for as much as $3,999.

The Proposition 37 campaign manager, Gary Ruskin, disputed the relevance of Mercola’s background to the push for the initiative. “We don’t endorse everything our supporters say,” he told me.

Sorry, that won’t do. Mercola isn’t just any backer of Proposition 37; he’s the biggest donor, and one who has built his business around some of the scare claims inherent in an anti-genetic engineering initiative. Moreover, he didn’t just write a check — he was solicited to contribute in February by Doug Linney, then the initiative’s campaign manager, who could not have been unaware of Mercola’s history.

The campaign’s founding organizer, Ruskin says, is Pamm Larry, 56, a Chico business owner and organic farmer who says she began traveling the state earlier this year on her own to drum up interest in a ballot measure.

Larry has appeared in a promotional video with Mercola and clearly has been deeply influenced by him. “I really admire the man and very much admire his integrity,” she says. She has bought into Mercola’s depiction of the FDA as a wickedly ineffective bully — she praises him for “standing up” to the agency over mammograms — but her grasp of the facts is poor.

“The FDA approved thalidomide!” she informed me during a brief interview, referring to the morning-sickness drug that produced an epidemic of birth defects in the 1950s and 1960s. Well, no. The FDA banned thalidomide, sparing the U.S. from the worst of the disaster. Meanwhile, she seems to think Mercola’s interest in Proposition 37 is entirely altruistic, despite his multimillion-dollar “natural” products empire.

Read all of the rest of the piece and you will agree with me that California Proposition 37 is a shame, devoid of the science that it touts and is just a BAD law.

Vote NO on California Proposition 37!

A few posts ago, I mentioned California Proposition 37, the Mandatory Labeling of Genetically Engineered Food Initiative which Californians will be asked to approve in November.

So, let’s look at who is behind this initiative. In other words, who are the major donors?

Joseph Mercola is one of the main financial supporters of the initiative. He is an osteopath who lives in suburban Chicago. According to Mercola, “Your health care, your food supply, everything you need to live a healthy life is now being taken away and controlled by a massive industrial complex and corrupt government

But, who is this Osteopathetic doctor and why is he so driven to donate almost a $ million for a California initiative campaign?

Here is a profile on Dr. Mercola from Sacramento Bee reporter Dan Morain:

Rich people with a cause cannot seem to resist inflicting their world views on California politics, no matter if they are levelheaded or wacky, and no matter where they reside.

It’s generally not a good thing for those of us who do live here.

Joseph Mercola is the latest guy seeking to improve the Golden State. Mercola is an osteopath who lives in suburban Chicago and runs a website, Mercola.com, which promotes his alternative, though generally unproven, health-related products and ideas.

Mercola donated at least $500,000 for a signature-gathering drive to place a measure on the November ballot that would require labeling of genetically modified food sold in California.

Although there’s no proof that genetically modified food has caused anyone’s nose to fall off, labeling is not a terribly bad idea. People like to know what they’re eating. But if the big money behind this proposal is a guide, the California Right to Know Genetically Modified Food Act would be an unmodified, unmitigated and unadulterated turkey.

Read the rest of Morain’s profile on the whacky Dr. Mercola and you can see Mercola in action in the embedded video below:

And, why would Californians vote to approve an initiative proposed and bankrolled by this “health nut?”

Californians shouldn’t – Vote No on 37.