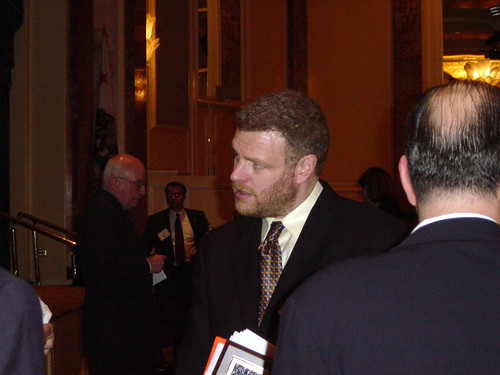 The 250 guests arrived and were treated to a Champagne reception.

Flap set up his laptop and blogged until the crowd began to congregate.

Mark Steyn made his way from his suite to mingle with the dinner patrons and guests.

The topic: Conservative Politics, of course.

So, who is Mark Steyn (for the uninitiated)?

Mark Steynâ€™s writing on politics, arts and culture can be read throughout much of the English-speaking world.

In the United Kingdom, Mark appears in The Daily Telegraph , Britainâ€™s biggest-selling broadsheet daily, and writes on current events and movies for The Spectator, the oldest continuously-published magazine in the English language. In the United States, he is a columnist for The Chicago Sun-Times, Americaâ€™s fifth most-read daily paper, and also appears in The New York Sun, the cityâ€™s first new broadsheet daily in a quarter of a century, The Washington Times , and The Orange County Register in California. In addition, Mark is drama critic for The New Criterion, resident obituarist for The Atlantic Monthly , and National Reviewâ€™s Happy Warrior. In his native Canada, he can be read in the new magazine The Western Standard . Mark also appears regularly in The Jerusalem Post, the Middle Eastâ€™s leading English-language daily, and The Irish Times, Irelandâ€™s newspaper of record; and more occasionally in other publications, including The Australian ,The Wall Street Journal and (translated into Italian) Il Foglio, but even when heâ€™s not in them he thinks theyâ€™re worth reading, which is why we link to them here. Mark doesnâ€™t do a lot of TV and radio these days, but he enjoys his appearances on The Hugh Hewitt Radio Show.

Mark can be read on Monday in The New York Sun and The Washington Times, Tuesday in The Daily Telegraph, Wednesday in The Jerusalem Post, Thursday (for Londoners) or Friday (for the rest of the United Kingdom) in The Spectator, and Sunday in The Chicago Sun-Times and The Orange County Register, as well as every two weeks in National Review and The Western Standard and every month in The Atlantic Monthly and The New Criterion.

On to dinner, award presentation and speech by Steyn…..but first a photo of attorney and Bear Flag League member, Jeff, SoCal Law Blog……

The Board of Directors of the Claremont Institute is pleased to announce that Mr. Mark Steyn will receive the 2005 Henry Salvatori Prize at our annual dinner in honor of Sir Winston S. Churchill. The event will be held on Friday, December 2, 2005 at the Regent Beverly Wilshire Hotel in Beverly Hills, California.

So, Flap is off from Thousand Oaks at Los Angeles rush hour traffic time on a Friday afternoon. Traffic is smooth until Las Virgenes road and then gridlock on the southbound 101.

Flap turns onto Malibu Canyon Road winds through the canyon, through Malibu, and ends up on the gridlocked Santa Monica Freeway East (I-10). Finally, Robertson, Wilshire Boulevard and the hotel at the corner of Rodeo Drive – Beverly Hills. Parking by valet.