Just over ten months before next February’s Iowa caucuses Sarah Palin is returning from a recent trip to Israel. But Tea Party darling Rep. Michele Bachmann is already hitting the Hawkeye state capital.
Unlike Palin, all signs point to Bachmann running for the Republican presidential nomination later this year. In an Iowa version of ABC News’ “Subway Series” shot on the Des Moines city trolley, the Minnesota Republican told ABC’s Jonathan Karl, “I’m in.”

“I’m in for 2012 in that I want to be a part of the conversation in making sure that President Obama only serves one term, not two, because I want to make sure that we get someone who’s going to be making the country work again. That’s what I’m in for,” Bachmann said.

“But I haven’t made a decision yet to announce, obviously, if I’m a candidate or not, but I’m in for the conversation.”

Michele will NOT be a serious candidate in 2012 but she is preparing for the future. What future that is will be anyone’s guess.

Exit question: With Sarah Palin out of the way, will the LEFT Press go after Bachmann as the next boogie woman on the RIGHT?


Former Arkansas Gov. Mike Huckabee leads the field of possible GOP presidential candidates in “positive intensity” among Republicans nationwide with a score of +25 among Republicans who are familiar with him, followed by Rep. Michele Bachmann of Minnesota with a score of +20. Huckabee is recognized by 87% of Republicans, compared with Bachmann’s 52%. A number of other possible Republican presidential candidates trail these two in Positive Intensity Scores, including Sarah Palin, who is the best known of the group.

As with a number of Presidential polls released within the past month, these results verify that there is NO front runner in the GOP Presidential field.

Michelle Bachmann is a bit of a surprise to me but is her intensity rating a spill-over from a Sarah Palin decline in the polls? Hard to say. But, if anything is clear, Mike Huckabee might be reconsidering whether he wants to give up that Saturday night Fox News gig.

And, poor Mitt Romney is hoping for a miracle.

But, who knows, with the GOP primary voters all split apart, who will emerge with sufficient numbers of delegates? I can see a scenario where there is a “brokered” convention, where it is uncertain as to who the GOP nominee will be.

Here are the Republican candidate images among Republicans and GOP-leaning independents: 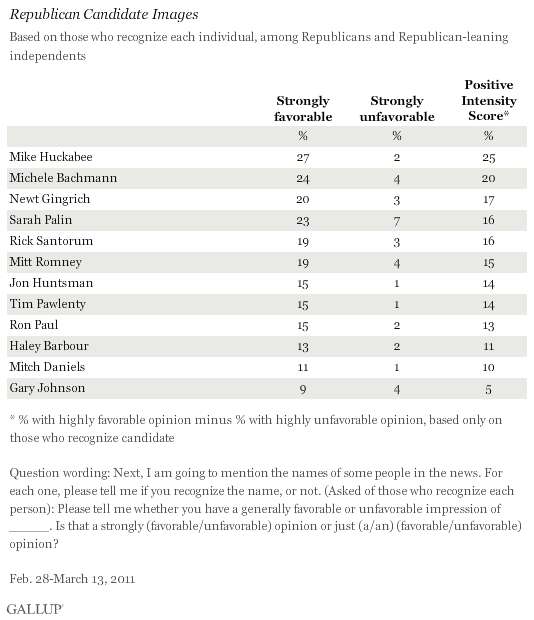 Here is a chart: 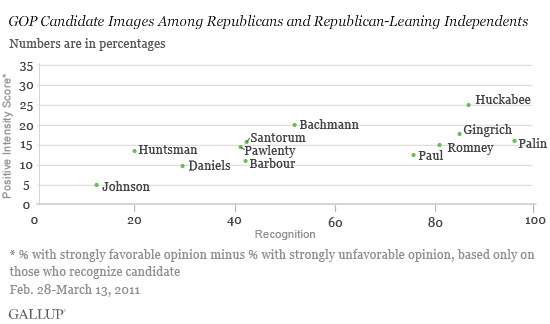 One last chart, Republican candidate images with a combination of recognition and favorability questions: 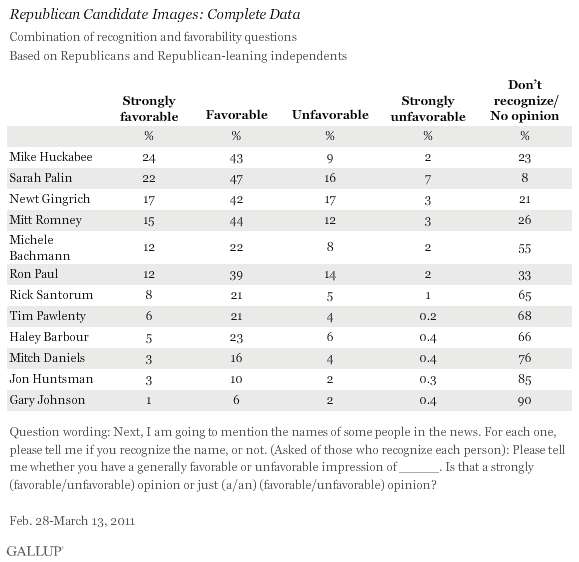 Again, what does this all mean?

If I were Huckabee this morning, I would be meeting with advisers. If I were Mitt Romney, I would be planning for a convention-based campaign after primary votes are scattered all over different candidates.

At this stage of the race for 2012, the GOP might be looking at a long primary season.

Why not – the more the merrier.

ABC News has learned that Bachmann, R-Minn., also is seriously weighing whether to seek the Republican nomination for president in 2012.

A source close to the three-term congresswoman said Bachmann will travel to Iowa this month for multiple meetings to seek advice from political forces there and party elders close to the caucus process before coming to a final decision regarding a potential presidential run. Bachmann, a native of Waterloo, Iowa, also is set to deliver a keynote speech at an Iowans for Tax Relief PAC fundraiser Jan. 21 in Des Moines, Iowa.

A few speeches or a few trips to Iowa do not a Presidential candidate make – at least in 2012.

But, Bachmann is a prolific fundraiser and her attendance in Iowa will raise the requisite eyebrows for the future.

I think the Republican Congresswoman, Michele Bachmann is more than a little paranoid here and using hyperbole to make her point about government use and abuse of information obtained by the United States Census.


Outspoken Republican Rep. Michele Bachmann says she’s so worried that information from next year’s national census will be abused that she will refuse to fill out anything more than the number of people in her household.

In an interview Wednesday morning with The Washington Times “America’s Morning News,” Mrs. Bachmann, Minnesota Republican, said the questions have become “very intricate, very personal” and she also fears ACORN, the community organizing group that came under fire for its voter registration efforts last year, will be part of the Census Bureau’s door-to-door information collection efforts.

The Congresswoman is incorrect and will comply with the law.

But, Congress should examine the problem of ACORN and the use of the information -especially since Congressional and Electoral College reapportionment depends on a fair and impartial accounting of demographics.

If the Obama Administration and the Democratic Party through ACORN is going to subvert the census process for partisan advantage then the only recourse is to sue in federal court to enjoin/examine the entire process.

And, it may come down to this.