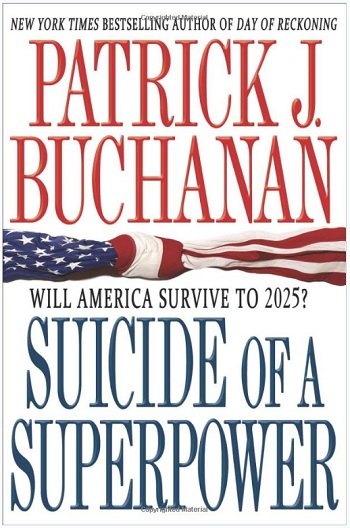 The Pat Buchanan book which precipitated Buchanan’s boot from MSNBC

Pat will be better off at a newly renovated CNN or over at Fox News (they really need some new blood).

My days as a political analyst at MSNBC have come to an end.

After 10 enjoyable years, I am departing, after an incessant clamor from the left that to permit me continued access to the microphones of MSNBC would be an outrage against decency, and dangerous.

The calls for my firing began almost immediately with the Oct. 18 publication of “Suicide of a Superpower: Will America Survive to 2025?”

A group called Color of Change, whose mission statement says that it “exists to strengthen Black America’s political voice,” claimed that my book espouses a “white supremacist ideology.” Color of Change took particular umbrage at the title of Chapter 4, “The End of White America.”

Media Matters parroted the party line: He has blasphemed!

A Human Rights Campaign that bills itself as America’s leading voice for lesbians, bisexuals, gays and transgendered people said that Buchanan’s “extremist ideas are incredibly harmful to millions of LBGT people around the world.”

Their rage was triggered by a remark to NPR’s Diane Rehm — that I believe homosexual acts to be “unnatural and immoral.”

On Nov. 2, Abe Foxman of the Anti-Defamation League, who has sought to have me censored for 22 years, piled on.

“Buchanan has shown himself, time and again, to be a racist and an anti-Semite,” said Foxman. Buchanan “bemoans the destruction of white Christian America” and says America’s shrinking Jewish population is due to the “collective decision of Jews themselves.”

And what else explains the shrinkage of the U.S. Jewish population by 6 percent in the 1990s and its projected decline by another 50 percent by 2050, if not the “collective decision of Jews themselves”?

Let error be tolerated, said Thomas Jefferson, “so long as reason is left free to combat it.” What Foxman and ADL are about in demanding that my voice be silenced is, in the Jeffersonian sense, intrinsically un-American.

Consider what it is these people are saying.

They are saying that a respected publisher, St. Martin’s, colluded with me to produce a racist, homophobic, anti-Semitic book, and CNN, Fox News, C-SPAN, Fox Business News and the 150 radio shows on which I appeared failed to detect its evil and helped to promote a moral atrocity.

Well, this is B.S. but hopefully Pat will get a generous settlement and a new GIG soon. MSNBC and NBC News are insufferable LEFT-WING zealots.

Pat should come back with Micheal Kinsley and redo their Cross-fire Show of the 1980’s and early 1990’s.

Pat Buchanan: Gingrich is a Rockerfeller republican, political opportunist with no core beliefs


This is a big knife in the back of Newt Gingrich on the eve of the Florida GOP Primary election. With Ann Coulter and Elliott Abrams attacks of Gingrich, conservatives and Tea Party voters may very well be less enthused to vote for him.

Over the last week, several people that worked in the Reagan administration have come forward and countered former House Speaker Newt Gingrich’s claim that he is a “Reagan Republican.” These people say Gingrich “wasn’t on board with a lot of what President Ronald Reagan tried to accomplish during his two terms.”

And although that claim has been disputed by other Reagan administration officials, former Reagan communications director Pat Buchanan told “The McLaughlin Group” this weekend that Gingrich wasn’t seen favorably by those in the administration.

“[I]n the Reagan White House, Newt Gingrich was considered quite frankly by a lot of folks to be something of a political opportunist and who was not trusted and who had played no role whatsoever,” Buchanan said. “He was a Rockefeller Republican in the great Goldwater-Rockefeller battle, where conservatism came of age.”

There is little doubt that Gingrich Campaign will be able to survive after the Florida Primary tomorrow. However, the RIGHT is split as to whether Gingrich is the conservative alternative to Romney.

The nominee will either be Romney or somebody else, should Gingrich catch fire on Super Tuesday and win sufficient delegates to deny Romney a majority. With all of these conservative attacks on Gingrich, I doubt he can consolidate support within the GOP.

And, Mark Levin has this criticism of Pat Buchanan.

As I said, the RIGHT is split over the Newt Gingrich candidacy.

Don’t think Warren Buffet will bite at this one. But, Pat has a point.


The liberal media are predictably fawning over billionaire Warren Buffett’s op-ed in the New York Times Monday calling for new taxes on the super-rich.

This led MSNBC’s Pat Buchanan on Monday’s “Morning Joe” to challenge the Oracle of Omaha asking, “Why doesn’t he set an example and send a check for $5 billion to the federal government?”

Come on Warren, just go for it. Put your money where your mouth is.