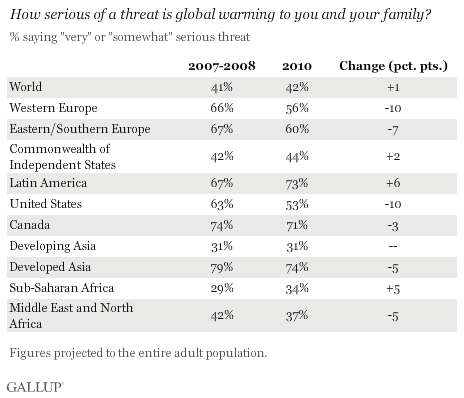 Yes, and Europeans too, according to the latest Gallup Poll.


Gallup surveys in 111 countries in 2010 find Americans and Europeans feeling substantially less threatened by climate change than they did a few years ago, while more Latin Americans and sub-Saharan Africans see themselves at risk.

Only 53% of Americans currently view climate change as a serious personal threat, down from 63% in previous years.


The feuding between rich and poor nations at climate talks in Bangkok in April demonstrates the obstacles that remain before the world can agree on a climate policy. Gallup’s data show that fewer Americans and Europeans, whose nations are central players in these talks, feel threatened by global warming today than they did in recent years. However, majorities in many of these countries still see climate change as a serious threat, which means the issue remains personally important to them.

Global warming and climate change have been the cause de celebre in recent years – spurred by former Democratic Vice President Al Gore.

Looks to me that the science has caught up with the hype and Americans are beginning to understand the difference.

You mean the Democrat Pols have the same skeletons in their closets as the Republicans?

The fact is the LEFT has been able to manipulate the LAME-Stream media in covering up their sexual predilections better than the RIGHT. With the emergence of the New Media, I don’t think this will be working out so well for them. Look recently at Al Gore and John Edwards.

Stay tuned….. we are going into election season and the dirty laundry will fly.

From the National Enquirer


Well, they were right about John Edwards, Rielle Hunter and their baby.


In a bombshell new development in the AL GORE sex scandal — broken EXCLUSIVELY earlier today by The ENQUIRER — the Oregon District Attorney says there’s “the possibility of a criminal prosecution.”

And, Al Gore and his wife of 42 years, Tipper, recently announced they were divorcing.

But, if I were Gore I think I might want to get in front of this story, unlike John Edwards.

Al Gore and the World Climate Change or Global Warming Cabal are jokes. And, they are frauds.

But, what are a few mistakes in the science , right?

I, for one, genuinely wish that the climate crisis were an illusion. But unfortunately, the reality of the danger we are courting has not been changed by the discovery of at least two mistakes in the thousands of pages of careful scientific work over the last 22 years by the Intergovernmental Panel on Climate Change. In fact, the crisis is still growing because we are continuing to dump 90 million tons of global-warming pollution every 24 hours into the atmosphere â€” as if it were an open sewer.

It is true that the climate panel published a flawed overestimate of the melting rate of debris-covered glaciers in the Himalayas, and used information about the Netherlands provided to it by the government, which was later found to be partly inaccurate. In addition, e-mail messages stolen from the University of East Anglia in Britain showed that scientists besieged by an onslaught of hostile, make-work demands from climate skeptics may not have adequately followed the requirements of the British freedom of information law.

But the scientific enterprise will never be completely free of mistakes. What is important is that the overwhelming consensus on global warming remains unchanged. It is also worth noting that the panelâ€™s scientists â€” acting in good faith on the best information then available to them â€” probably underestimated the range of sea-level rise in this century, the speed with which the Arctic ice cap is disappearing and the speed with which some of the large glacial flows in Antarctica and Greenland are melting and racing to the sea.

The Nobel Prize has been denigrated with Al Gore winning for climate fraud and President Obama winning the Nobel Peace Prize as he fights two wars against Islamic extremists.

Should Al Gore give back his Nobel Prize?

It isn’t worth anything, anyway.

The soon to be released book of Bill Clinton taped interviews reveals the tension between the President and Vice President regarding Clinton’s Monica Lewinsky meltdown.


During the discussion, Clinton told his vice president that he was disappointed that Gore had not used him in the last ten days of the 2000 campaign in strategically significant stateâ€”Arkansas, Tennessee, New Hampshire, and Missouri. But Clinton said he could understand that. What was more upsetting for him, Clinton remarked to Gore, was that Gore had not crafted a more winning message during the campaign, that he had not campaigned on any grand themes. Clinton insisted to Gore that he hadn’t cared about how Gore had referred to Clintonâ€”and his personal scandalâ€”during the campaign. Paraphasing this portion of the conversation, Branch writes that Clinton told Gore, “To gain votes, he would let Gore cut off his ear and mail it to reporter Michael Isikoff of Newsweek, the Monica Lewinsky expert.”

At one point in the conversation, Gore told Clinton that he was still traumatized by having been caught up in the fundraising scandals of the 1996 Clinton reelection campaign, and he indicated that he blamed Clinton. Clinton could hardly believe this, and he told Branch that Gore was probably in shock from the election or unhinged, remarking, “I thought he was in Neverland.”

Exit question: Did Al Gore just NOT want the Presidency? You know, no fire in the belly?

Obviously, it was Gore’s to lose and he did just that……

This is certainly the market speaking. Nobody Flap knows desires an underpowered, unsafe vehicle to transport their family. However, Al Gore, Jerry Brown and the reduced expectations crowd wants to force their smaller is better “GREEN” philosophy on America.

In the meantime, other countries like China and India expand their industrial capacity without regard to Al Gore and out compete the United States.

For the radical environmental movement, I suppose this is just collateral damage.
Previous: