Those Republican lawmakers who are bloviating about violating the Americans for Tax Reform pledge are doing just that. They have NOT and probably won’t vote for higher taxes.

Because they know their constituents would vote their asses out of office.

Anti-tax activist Grover Norquist said Monday that his group, Americans for Tax Reform, would work to unseat Republicans who break their pledge to never vote for higher taxes.

His vow came after prominent GOP lawmakers said over the weekend they would consider breaking the Taxpayer Protection Pledge in order to reach a deal with Democrats and President Barack Obama to avoid tumbling over the fiscal cliff – the combination of sweeping spending cuts and tax increases that would go into effect at the end of the year if negotiators can’t reach a deal on reducing the federal debt.

Norquist said his group would “certainly highlight who has kept their commitment and who hasn’t” when it comes time for lawmakers like Sen. Lindsey Graham and Rep. Peter King to run for re-election, though Norquist claimed voters generally decide on their own to oust elected officials who vote to raise taxes.

“Historically the people who lose do so because the people in their state have figured that out,” Norquist said on CNN’s “Starting Point with Soledad O’Brien.”

Senator Lindsey Graham of South Carolina will probably be replaced as the Republican nominee anyway, since he has proven to be too left for the South Carolina GOP.

There seems to be a great deal of posturing with the knowledge that if NOTHING is done, taxes will really increase.

It should be a fun few weeks before Christmas with EVERY POL submitting their own plan to avoid the “Fiscal Cliff.”

Grover Norquist of the Americans for Tax Reform

A group of influential Christian conservatives and their allies emerged from a private meeting at a Florida resort this month dissatisfied with the Republican presidential field and uncertain where to turn.

The event was a meeting of the Council for National Policy, a secretive club whose few hundred members include Dr. James C. Dobson of Focus on the Family, the Rev. Jerry Falwell of Liberty University and Grover Norquist of Americans for Tax Reform. Although little known outside the conservative movement, the council has become a pivotal stop for Republican presidential primary hopefuls, including George W. Bush on the eve of his 1999 primary campaign.

When Rudy Giuliani wraps up the GOP nomination, the KINGMAKERS of the Evangelical Christian Right MIGHT turn to a third party candidate.

The only question is how marginalized and irrelevant will they become. No GOP Senator, Governor or Congressman will foresake their political career to become a GOP spoiler in ’08.

Flap’s bet is that these folks will splinter and divide. Some will covertly support Giuliani and some will support the third party candidate.

Will it matter in the Electoral College of Rudy vs. Hillary?

Probably only in the Red States that are already going GOP against Hillary.

But, guess what? In those states it is winner take all and the electoral votes will go to Rudy in any case.

But, if Rudy were to choose former Arkansas Governor Mike Huckabee as Vice President, they might find an excuse to support/vote for the “Redemptive SINNER.” 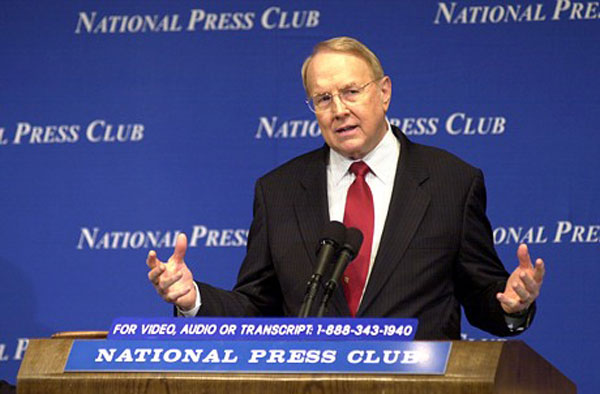 James Dobson of Focus on the Family on John McCain: â€œI pray that we donâ€™t get stuck with himâ€

So, what will Norquist, Weyrich, Dobson, Falwell, Robertson’s role be in the presidential campaign of 2008?

To drive East and West Coast center-left independent voters to the GOP, of course……

Jerry Falwell – One of the KINGMAKERS of the Christian Right