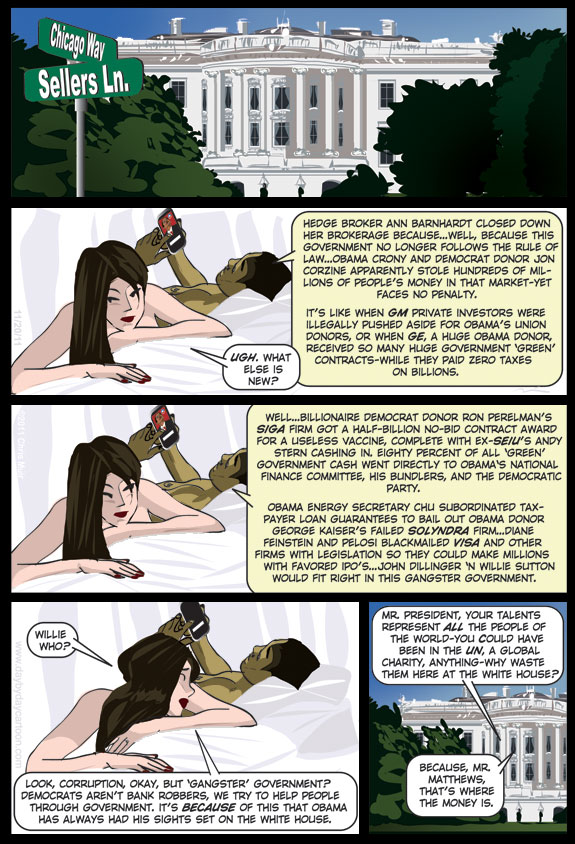 Day By Day by Chris Muir
Chris, now, the Clinton Cabal are trying to push Obama out of the way – after he and his Obama Opporuntists have robbed the country blind.


When Harry Truman and Lyndon Johnson accepted the reality that they could not effectively govern the nation if they sought re-election to the White House, both men took the moral high ground and decided against running for a new term as president. President Obama is facing a similar reality—and he must reach the same conclusion.

He should abandon his candidacy for re-election in favor of a clear alternative, one capable not only of saving the Democratic Party, but more important, of governing effectively and in a way that preserves the most important of the president’s accomplishments. He should step aside for the one candidate who would become, by acclamation, the nominee of the Democratic Party: Secretary of State Hillary Clinton.

Day By Day by Chris Muir
Speaking about choices. Did you read about how the Obama Administration knew about the location of Osama Bin Laden for three years and how the President was conflicted on what to do?

Looks like the good choices President Obama made was to hire Hillary Clinton and Leon Panetta. A bad choice was Valerie Jarrett.

Day By Day by Chris Muir
The idea of losing Egypt to Islamic Fundamentalist leaders much like President Jimmy Carter lost Iran is much discussed the past few days. Egypt is at a FLASHPOINT.

State television said that a curfew has been imposed in the capital and the military urged the protesters to go home.

But the thousands of protesters in Tahrir Square choosed to stay on Sunday.

The show of defiance came as Egypt entered another turbulent day following a night of deadly unrest, when looters roamed the streets in the absence of police.

Opposition groups in the country have called for national unity, and Mohamed Elbaradei, a leading opposition figure, has arrived at Tahrir Square to join the protests.

The National Coalition for Change, which groups several opposition movements including the Muslim Brotherhood, appointed ElBaradei with negotiating with Mubarak’s government.

The Obama Administration appears to be indecisive as to who to support – the protesters in the street or the 3 decades old strong man dictator, Hosni Mubarak.


The Obama administration struggled to maintain a careful balance on its response to the crisis in Egypt on Sunday, which continued to spiral out of control as armed gangs broke hundreds of militants out of Egyptian jails and the U.S. Embassy warned citizens to consider leaving the country as soon as possible.

Secretary of State Hillary Rodham Clinton made the rounds on all five Sunday shows, advocating that the people’s voice be heard while taking care not to call for a departure of President Hosni Mubarak.

The steps Mubarak has taken to address his people’s grievances against the government haven’t been enough, Clinton said on “Fox News Sunday.”

“I don’t think anyone is satisfied, least of all the Egyptian people,” Clinton said.

But when asked on CNN’s “State of the Union” whether the U.S. was taking the side of government or the protesters, Clinton stressed that the U.S. had been “on the side of the people” as it had been for more than 30 years of cooperation with Cairo while advocating greater democratic and civil rights.

“We’re not advocating any specific outcome,” she said.

She said that the U.S. is trying to “keep on the message we’ve been on, convey it publicly and privately, and stand ready to help.”

In other words, the State Department under Obama and Hillary Clinton does not know what to do. Looks like when the call came in at 3 AM, they both have failed to answer.

US Secretary of State Hillary Clinton (right) with France’s Minister of Foreign Affairs Michele Alliot-Marie at the NATO summit in Lisbon on Saturday. Clinton has acknowledged passenger concerns over new pat-downs at airports seen as too intrusive, admitting she would rather avoid having one

And, I believe that NOT.

“I am very happy doing what I’m doing and I am not in any way interested in or pursuing anything in elective office,” the 63-year-old former First Lady said on the “Fox News Sunday” program.

Clinton’s political aspirations have been a frequent topic of speculation since she lost the Democratic presidential nomination to President Barack Obama in 2008 and then agreed to become his secretary of state.

As recently as last month, Clinton dismissed speculation prompted by a book written by journalist Bob Woodward that she would replace Vice President Joe Biden on the Democratic ticket with Obama in 2012.

“I have absolutely no interest and reason for doing anything other than just dismissing these stories and moving on,” she said at the time.

This poll does NOT do much for her either but 15 points before the November election may change considerably after.


If Secretary of State Hillary Clinton were to challenge President Barack Obama for the Democratic presidential nomination in 2012, she would currently have the support of 37% of Democrats nationally, while 52% would support Obama.

Presidents with relatively low job approval ratings heading into a possible re-election bid are vulnerable to intra-party challenges. As two examples, Gerald Ford and Jimmy Carter were challenged for their respective parties’ nomination as sitting presidents — Ford by Ronald Reagan, and Carter by Edward Kennedy and Jerry Brown. Ford’s job approval rating had reached as low as 37% in 1975, the year before he ran for re-election, and Carter’s had reached 28% in 1979. Obama’s current weekly job approval rating is 44%, albeit with more than two years until the next presidential election.

Matt Drudge, as always, is having fun with Hillary Clinton. This photo on the Reuter’s wire is pretty weird.

And, it reminds us that if the Democrats insist on sending the Clintons out to save their ass in the Midterm Congressional elections (in five weeks), there will be reminders of what has gone on before – like impeachment, perjury, “sex with that woman” and political contribution corruption.

Some outstanding surrogates, the Clintons make – for the GOP