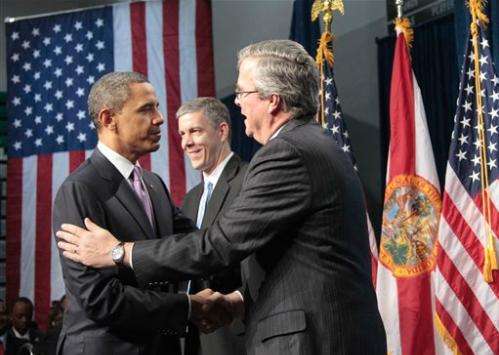 According to the latest Viewpoint Florida Poll.

Governor Bush’s 57%-38% lead over Obama can be attributed to several interesting figures found in the crosstabs of our statewide survey of likely voters in Florida. For example, Bush enjoys a 66%-31% lead over President Obama among male voters, but only leads Obama 50%-44% among women.

26% of Democrats stated they would vote for the younger brother of former President George W. Bush over Barack Obama if the Presidential election were held today. Bush has almost unanimous support from his base with 89% of Republicans supporting him, while Obama gets just 71% support from members of his own party. Governor Bush also leads President Obama 46%-40% among independent voters.

Finally, our regional crosstabs show Governor Bush dominating the President in Jacksonville and Florida’s Panhandle. 71% of respondents in that region preferred Governor Bush, to just 27% who said they would pull the lever for President Obama. Bush earns 60% support in Orlando and the Space Coast, beating Obama in that swing region by 27 points. Bush even bests Obama in South Florida, where he holds a narrow 48%-46% lead.

Except Jeb is not running…..

But, can Bush help a candidate, perhaps like Mitch Daniels? 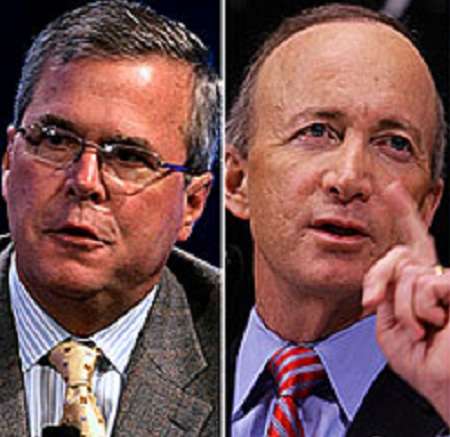 
Jeb Bush, brother of one former president and son of another, isn’t going to seek the White House for himself next year, he says, but he likes what he’s seen so far from Indiana Gov. Mitch Daniels.

Daniels, in his second term, is among a slew of Republicans considering a presidential campaign next year.

“Mitch is the only one who sees the stark [economic] perils and will offer real, detailed proposals,” Bush told Jacksonville business leaders, according to the Florida Times-Union.

“He would be the anti-Obama, at least socially,” Bush said in the newspaper’s account of a private gathering. “He is not good on a teleprompter, but if my theory is right that would work well for him.” Daniels, a Midwesterner with an understated sense of humor, also told the conservatives in Washington the next president will have to consider revamping entitlement programs such as Social Security and Medicare.

Jeb Bush’s good will stopped far short of any endorsement for Daniels, who first must decide whether he is going to take the plunge in 2012.

Mitch Daniels is not only the anti-Obama but also the anti-Sarah Pain and anti-Mitt Romney.

Mitch is recovering in Indianapolis from rotator cuff surgery yesterday but he has definitley NOT ruled out a run for the White House. 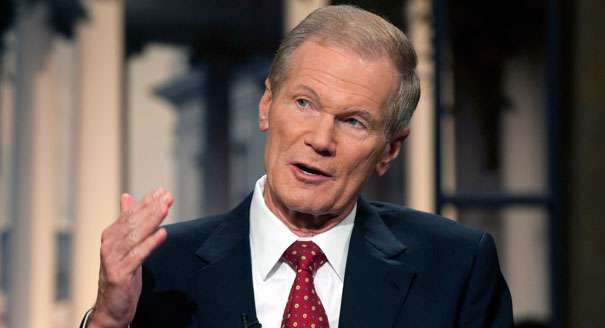 
Florida Sen. Bill Nelson falls short of the 50 percent mark against five potential Republican opponents, according to a poll commissioned by Ron Sachs Communications and conducted by Mason-Dixon Polling and Research.

The survey, which was shared exclusively with POLITICO, shows former Gov. Jeb Bush as the most powerful Republican challenger for Nelson. Bush leads the senator by 8 points, 49 percent to 41 percent.

But Bush is not considered likely to run, and the polling memo notes that a challenge from the former governor is a “bullet [Nelson] will likely get to dodge.”

Nelson fared better against all four of those candidates in the Sachs/Mason-Dixon poll, though he failed to win a majority of the vote in any match-up.

The closest race would be between Nelson and Mack, whose father – Connie Mack III – Nelson replaced in the Senate. Nelson would have just a 5-point advantage over Mack, leading 45 percent to 40 percent.

The poll was taken from Feb. 9-10 and tested 625 registered voters.

If former Florida Governor Jewb Bush EVER wanted to re-enter the political arena, this is the race. It is Jeb’s for the taking.

If Jeb declines, then I would consider his political career over.

The latest Fox News Poll is out and President Obama is doing well against all GOP contenders (Pdf).

The current crop of GOP Presidential hopefuls have been making no inroads into defeating President Obama. It may indeed be time for the Republican Party to look to the future and nominate some new and different candidates.

Not if the Republican Party wants to win.

John J. Miller has a cover story in the new issue of National Review that’s a compelling portrait of the accomplishments of Jeb Bush. Four years after leaving the Florida governor’s mansion, he remains one of the most impressive Republican politicians in the country, a formidable policy mind with the political chops to drive conservative reforms even out of office. So why isn’t he running for president? Bush told Miller what he’s said to others, too — he won’t run in 2012, but he’ll consider 2016. This is a mistake. Bush should run now for at least eight reasons…..

If Jeb wants to run for President, he should run against Florida Democrat Senator Bill Nelson in 2012, serve in the Senate with distinction and then run. Otherwise, forget about it.

A good and wise choice.

If Jeb Bush would let them, Florida’s GOP faithful would crown him their Senate nominee in 2012 without a contest.  When given an eight-candidate list of potential nominees, they give Bush almost three-quarters of the vote, and no one else gets more than 6%.Unfortunately for the party, he is unlikely to run, and in his absence, almost a third of respondents are undecided.  In that case, their primary is likely to be a large and wide-open race, with the top four candidates bunched in the mid- to low teens.

Bush is the preference of 72% of the hardest-core Republican voters in the Sunshine State.  The next closest option is outgoing Attorney General and Gubernatorial primary loser Bill McCollum at 6%, with George LeMieux, Connie Mack IV, U.S. Rep. Vern Buchanan, and state Rep. Jennifer Carroll each at 3%, Mike Haridopolos at 1%, and Adam Hasner at less than 1%.  10% are either not sure or prefer someone else.

With Bush eliminated from the field, though, any one of the lesser options could win at this point.  A full 31% have no idea who they would support, and of the remaining voters, 15% choose Mack, 14% McCollum, 11% LeMieux, 10% Carroll, 9% Haridopolos, 7% Buchanan, and 3% Hasner.  Considering the margin of error, almost all of them are statistically tied for the lead.  Tuesday’s release showed that Haridopolos, Hasner, and even LeMieux and Mack are essentially unknowns statewide, and that is still the case with these most dedicated partisans who ought to know them best.  So all of these possible nominees have plenty of time to make a name for themselves and fill the Bushless void.

But, alas, unless someone persuades him, it is unlikely Bush will run.

Really a shame since Bush, despite his open-borders mentality would certainly be a better Senator than Democrat Bill Nelson.