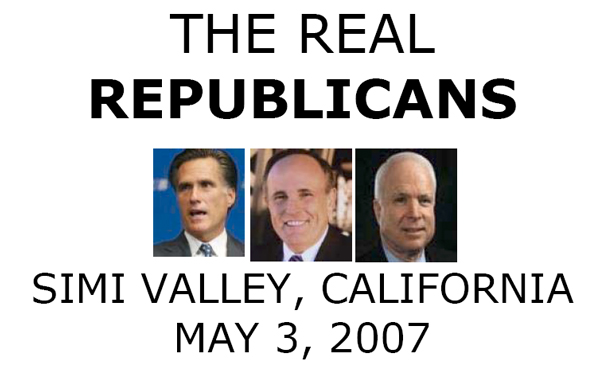 LET’S GET READY TO RUMBLE

Chuck Todd and Mark Murray over at MSNBC have a good set of links for a pre-debate read:

The AP previews tonightâ€™s debate: â€œGiuliani, McCain and Romney all kept their public campaign schedules relatively light over the past few days, opting to spend as much time as possible huddling with aides to rehearse their responses to expected questions on top issues such as Iraq, immigration, taxes, abortion, gay marriage and terrorism.â€ More: â€œThe Reagan library [is] a fitting setting. Most, if not all, of the Republican candidates have embraced Reagan’s legacy and called for their party to return to the small-government, low-tax, strong-military ideals he espoused.â€

But the New York Times wonders if the contenders will want to embrace another Republican: George W. Bush. â€œDo they embrace him as a means of appealing to the conservative voters who tend to decide Republican primaries? Or do they break from him in an effort to show that they will lead the nation in a new direction? Do they applaud his policies or question his competence – or both?â€

The New York Times also focuses on Giuliani, who hasnâ€™t debated since 1997, when he faced off against mayoral challenger Ruth Messinger. It asks which Rudy will show up: â€œThe hard-hitting prosecutor? Or Mr. Nice Guy? Mr. Giuliani has played both in his short debate history.â€

Flap has his own links:

What To Watch For — Reagan Debate

MSNBC debate coverage including rate the candidates during the debate.

GOP Presidential Debate Watch: Republicans Get Ready to Square Off

Stick to the issues or get out of the race.