“I wouldn’t have done it,” the former Minnesota governor told The New York Times on Monday when asked if he would have created a map like the one posted last year on Sarah PAC’s website showing crosshairs on lawmakers who supported health care reform.

Exploitation of the Tucson Massacre has been rampant on the LEFT. Tim, we really don’t need your banal comments about Sarah Palin.

And, you REALLY think you can win the GOP Presidential nomination?

Not a very good poll for the President.

On the Republican primary side it breaks out like this:

New Jersey Governor Chris Christie who has said he would not be a candidate is doing the best but all of the Republican contenders are within the ballpark.

Guess this is why Flap was invited to a blogger conference call this morning at 10:30 AM Eastern time.


Minnesota Gov. Tim Pawlenty has been quietly assembling the blueprint of a presidential campaign and will announce Thursday the support of a group of high-level political strategists and donors, complemented by a handful of top new media consultants, POLITICO has learned.

Pawlenty, under the radar of D.C.â€™s political community, has locked up some of the key operatives who engineered then-President George W. Bushâ€™s reelection campaign â€” a significant feat for a little-known Midwestern politician.

The moves underscore, and will lend credence to, the emerging belief among many establishment Republicans that Pawlenty is becoming the sole viable alternative to former Massachusetts Gov. Mitt Romney, a potential Republican primary rival. The Minnesota governor has even gone so far as to contact some of Romneyâ€™s former supporters.

Pawlenty, who previously has had little political infrastructure, is now being advised by a trio of GOP consultants with presidential experience: Terry Nelson, Sara Taylor and Phil Musser.

And in formally opening his political action committee, Freedom First, Thursday, Pawlenty will also announce two co-chairmen, William Strong, a Morgan Stanley vice chairman, and former Rep. Vin Weber (R-Minn.), both of whom are heavyweight GOP figures, along with a list of prominent Minnesota donors.

This is definitely a shot across the bow for Team Romney and Pawlenty has locked up some new media heavyweights with Patrick Ruffini and Patrick Hynes. Pawlenty’s Freedom First website is already up and looks impressive.

Now, over to Mitt Romney and any other potential 2012 Presidential candidates, like Sarah Palin.

Flap will be on the blogger conference call and will report about it when I can – it is a clinical dental practice day for me.

Rudy wants to nudge the social conservative issues to the background, not alienate voters and recapture the youth and suburban vote. Watch all of the video above to get his point.

The problem with Rudy when he ran for President was his personal baggage with his marriages and Bernie Kerck.He would have won the GOP nomination against McCain even with HIS far more liberal positions on social issues.

He is talking about returning to a “BIG TENT GOP.”

After all, the GOP has lost all of the Northeast, Far West and now parts of the Midwest in the Electoral College. But, is the GOP willing to deemphasize social issues like abortion, stem cell research and gay marriage – even to win elections?

Only, if the GOP is smart.

A little different approach is found in this interview of Minnesota Governor Tim Pawlenty. Pawlenty is of a different generation than Rudy but is essentailly formulating the same “NEW IDEA” method to win back elections.

Question: Back at the RGA meeting [last fall]], you talked about the party needed to get beyond Ronald Reagan. What do you mean by that? The RNC chairman candidates — all they really talk about is Reagan.

Answer: Well, I think I said in my state of my state, but I can also say it about my own party: we can’t be so in love with the past that we miss the future.  And the world is changing very rapidly, and there’s a lot of technological change, demographic change, cultural change, and it’s all approaching us at a very rapid speed. And I think the Republican Party fondly remembers Ronald Reagan, and we should. He’s going to go down in history as one of the great presidents. Our challenge is to have the solutions of the 1980s not be the solutions that we have in 2008s.  .. A lot has happened since the 1980s. There’s been a lot of change. We can be true to those values and principles, but half of the country doesn’t remember Ronald Reagan very well. If you’re under 40, 35 years old, Ronald Reagan is kind of a foggy notion. All I’m saying is, yes, let’s celebrate that, let’s learn from that, let’s build on it, but let’s talk about new ideas, new leaders, for the future.

The Republican Party is in dismal shape after the two terms of President George W. Bush. The Democrat Party enjoys super majorities in the Congress and now occupy the White House.

Times, demographics and the culture is changing. The GOP can either morph into a competitive, outreaching, ideas driven collection of leaders or slink back into the irrelevancy of a generation of Democrat Party rule.

With the long drawn out Obama announcement of his Vice President and the likelihood that he will choose Senator Evan Byah of Indiana, Flap has concluded that John McCain will choose Governor Tim Pawlenty of Minnesota as his choice for Vice President.

John makes the case about a “safe choice” for McCain and with today’s latest polls showing steady improvement in the polls, McCain does NOT need a blockbuster choice, like a Joe Lieberman or Tom Ridge.

John McCain will play it very safe and choose Pawlenty who conventional wisdom acknowledged and annointed months ago. 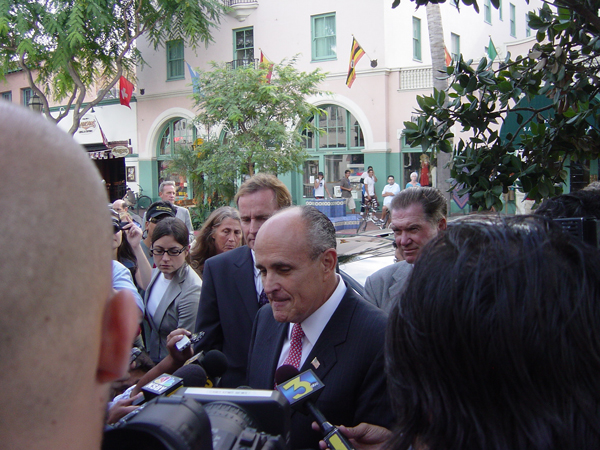 Rudy Giuliani has been asked to deliver the keynote address at the Republican National Convention next month in Minnesota.

What a great choice. Rudy on the oratorical attack.

This ends the speculation that Rudy would be John McCain’s Vice President choice. But, Flap maintains that Governor of Minnesota, Tim Pawlenty, will LIKELY be McCain’s choice.
Update:

Here is the Republican National Committee list of speakers: