Justene from Calblog and the Boi From Troy live blog the Bear Flag League Salon of Candidates Forum.

Boi From Troy: CRP cuts off nose to spite face

The rise of two ultra-conservative weblogs in California has made â€œblog a four-letter word at the California Republican Party. Now theyâ€™re running scared from the Internets at precisely the time they should be embracing it.

At the Fall 2005 Republican State Convention, the Bear Flag League, with help from Insurance Commissioner Candidate Dr. Phil Kurzner organized a salon for bloggers where down-ticket candidates such as Tony Strickland, Gary Mendoza and Eric Siddall came to talk about their vision for California and the State Party.

Then-communications director Karen Hanretty caught wind of the plan and offered to issue press credentials to bloggers for the Anaheim event. That weekend in Anaheim, John Fleishman and Steve Frank announced that they planned on starting their own blogs. Little did anyone know what would happen next.

Actually, Steve Frank announed in July 2005 that he was starting his blog as an extension of his weekly e-mail newsletter. And Jon Fleishman’s new website and blog had been long in the making.

But, nevertheless because either the Governor or the CRP Executive Board decided they might FOSTER MORE criticism during an election year they pulled the plug on bloggers obtaining press credentials.

Will this stop bloggers attending the CRP convention in February. NOPE.

Fleishmann and Frank will have access to the convention regardless of what the CRP does, yet the other bloggersâ€”who may just provide a balancing perspective to their anti-Arnold vitriolâ€”will be silenced by the Partyâ€™s reaction to the mediaâ€™s love-affair with the California Conservative blogger.

Flap suggests the CRP and Governor Schwarzenegger reconsider their decisions………

Carla Marinucci and the San Francisco Chronicle are only a few YEARS late and few hundred blogs short. 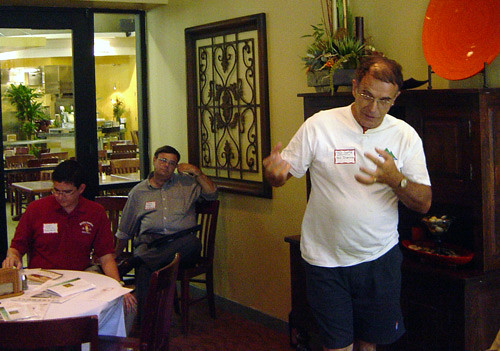 Ted Costa explaining Proposition 77 at the Bear Flag League Conference, July 2005. Steve Frank and Boi From Troy in the background.

Two years ago today I started blogging by warning in my very first post, If you think this is offensive, just wait til I really get going! What a way to celebrate my blogoversary!!!

The long awaited moment has arrived that I can reveal some of the details of The Jawa Report’s involvement in the capture of a would-be terrorist. Some of you already know some of the details as I have talked about them from time to time in a cryptic manner. I don’t want to overemphasize our role in the wannabe terrorists capture, nor do I wish to claim that the man now in custody would have been able to accomplish his stated goal of building and detonating a nuclear bomb in the United States–clearly he did not have that capacity–but this website did play a role in his capture.

Congratulations to Dr. Rusty Shackleford and the JAWA Report, a proud member of the Bear Flag League on their Blogoversary.

Michelle Malkin: WHAT ARE YOU FOR: SUCCESS OR FAILURE?

Another vet rises up…

Milblogger Smash confronted anti-war Democrat Rep. Bob Filner in California at one of the many “Out of Iraq” town hall meetings that took place this weekend.

Read about the exchange here.

Are you committed to the success of our military in Iraq, or are you resigned to failure?

“No, see, you, what you have done, is what I just talked about. That, how the President has gotten away with framing the issue. You framed the issue as “success or failure.” And obviously, if you’re “failure,” you’re a — you’re a jerk, right?”

“…Look, we — First of all, things can’t get much worse than they are now, by the way. They are pretty bad, no matter what Cheney says, no matter what Rumsfeld says. I mean, when you have 200 people killed, you know, in a day –”

“And you know, your brothers and sisters killed, something is wrong. …And, you know, if we shouldn’t have been in there to begin with, then it should not be incumbent on me to try to define getting out.”

But I would say, that an international police force, which could keep the peace, it would — that if we should put that in place at least —

SMASH: Led by whom, sir?

“..Look, if you define success as “democracy,” you know, why — why would you choose Iraq to go anywhere, anyway? I mean, why are we supporting Saudi Arabia, or whatever? So, success can’t be “democracy.” Success can’t be “lack of autocracy,” because we support autocrats other places.

“Success, it seems to me for these guys, is control of, not only the — the strategic positioning, but the oil. So, success for me would say, “we don’t need your lousy oil”. We could start — we could put — we can run this whole country off renewable energy, right this minute.”

“Why do we care what happens in this little nation? One reason –”

“And, so, let’s get off oil, and let’s care about human rights in their real form, everywhere.”

But, what do you expect in California safe congressional districts with a Democrat gerrymand?

The paper did a better job at combating bias this year than it has in past years, especially as the year went on. However, as this post shows, the paper still has an institutional problem of liberal bias, which is unlikely to end any time soon.

American Perspectives on C-Span will begin at 8 PM EST.

Flap has heard from the Claremont Institute:

Steyn’s speech from the Churchill Dinner will air on C-SPAN’s “American Perspectives” this Saturday night (December 17) at 9:30pm ET, and again roughly three hours later. You can also listen to the broadcast at that time at: http://www.c-span.org/watch/cspanradio.asp. The speech is also available for purchase from C-SPAN after it airs by calling C-SPAN Archives at 877-662-7726. We have not heard yet whether it will be available for viewing on the video archive section of C-SPANâ€™s website.