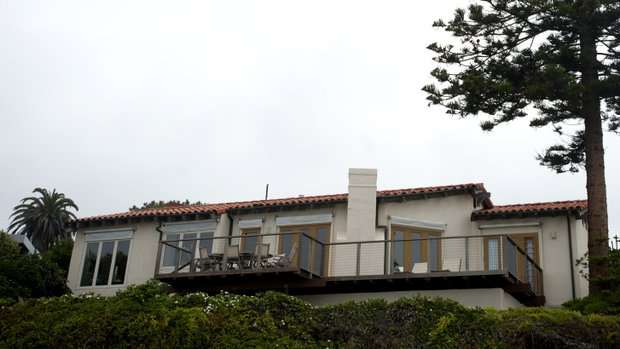 View from the beach of the 3,009-square-foot Romney home in La Jolla , which the GOP contender plans to demolish and replace with an 11,062-square-foot home. — Meg Roussos

Yet, Mitt will NOT be attending the September Los Angeles California Republican Party Convention in a few weeks.


GOP presidential contender Mitt Romney, scheduled to attend a series of fundraisers this weekend in San Diego, is also working on plans to nearly quadruple the size of his $12 million oceanfront manse in La Jolla.

Romney has filed an application with the city to bulldoze his 3,009-square-foot, single-story home at 311 Dunemere Dr. and replace it with a two-story, 11,062-square-foot structure. No date has been set to consider the proposed coastal development and site development permits, which must be approved by the city.

The former governor of Massachusetts purchased the home three years ago. According to a description from the listing agent, the Spanish-style residence at the end of a quiet cul-de-sac is sophisticated and understated in its décor, “offering complete privacy and unsurpassed elegance.”

Tentative plans call for new retaining walls and a relocated driveway, but would retain the existing lap pool and spa.

“This offering represents a truly unique opportunity for a buyer who appreciates the scarcity of this caliber of real estate,” the listing said.

Constructed in 1936, the three-bedroom, 4.5-bathroom home was among the first built in the Barber tract neighborhood, according to the La Jolla Historical Society, and has a stretch of lawn sloping to the white sand beach.

“I wanted to be where I could hear the waves,” Romney told a gaggle of media last year at a book signing in University City. “As a boy we spent summers on Lake Huron and I could hear the crashing waves at night. It was one of my favorite things in the world; being near the water and the waves was something I very badly wanted to experience again.”

Probably not the best timing in the world and not the best for his political image. Remember when Senator John McCain could not remember how many homes he owned?

But, Mitt, you have to show up to the California GOP confab.

Michele Bachmann will be speaking Friday night and Ron Paul has already said he would attend. 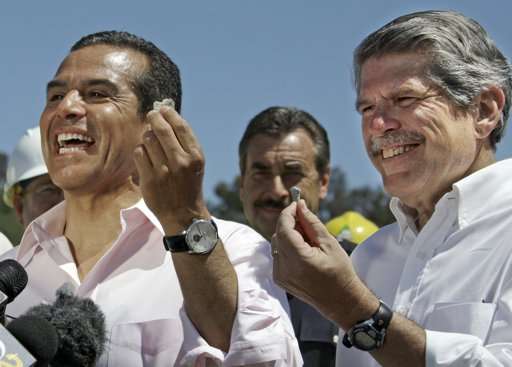 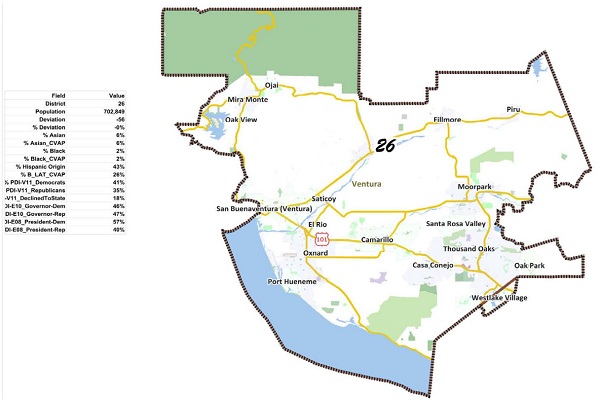 
The commission just voted out the new state lines on a 12-2 vote (with two Republicans voting no) and placed them on the Agenda for an official August 15th final vote.  Until then feel free to whine, complain, cuss and gripe to commissioners about their failures.  They can hear you, but they’re probably done listening.

On August 15th the only option is an up-or-down vote on the maps.  You cannot have your city reunited, get your Assembly Member back.  The plans are final and the only option now would be for the commission to vote the plans down and send them directly to the courts.

The game now transitions from the 14 members of the commission to the 67 members of Congress and the Legislature that have been drawn out of their seats, nested with other incumbents, or generally screwed over by the citizen process.  A preliminary look at the data on the Redistricting Partners site will show some fun potential pairings and political drama.  The site is now updated with maps (showing partisanship and incumbents), summary data for all districts in just a few pages, and extremely detailed datasheets from PDI for the  Assembly, State Senate and Congressional districts.

Looking at the Congressional map, it is certain that my GOP Representative Elton Gallegy will either have to move (his home and electoral base in Simi Valley is out of the District), retire, or just run (there is no requirement that you must live in the Congressional District you represent), or run against GOP Rep. Buck McKeon who will represent Simi Valley. Gallegy has options.

However, the new CA-26 which is what presumably this Congressional District is called is less Republican and more Hispanic in nature.

Here are the details: 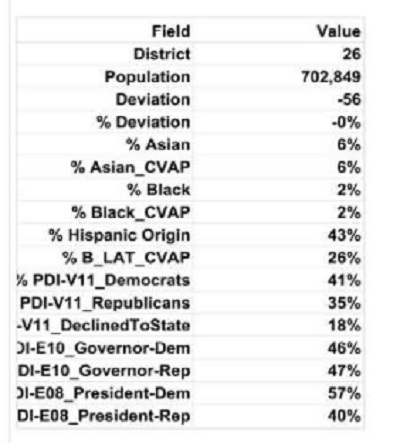 I will review the possible political scenarios next week after the final adoption of the maps.

I will also go over the California Assembly and State Senate Districts.

From my preliminary analysis of the statewide and Ventura County maps, they appear actually fair for the GOP. I, now, doubt that the California Republican Party will support a referendum on the Commission’s work.

But, then again, you never know and someone is bound to be really upset. But, this time it looks like the incumbent California Democrats.