It is easy for us political pundits to game the 2012 Presidential race with this Electoral College Vote Calculator which I mentioned previously here.

Today, Larry Sabato in his crystal ball has run through a number of electoral scenarios. They can be found here and can be gamed at the calculator site.

I particularly like Sabato’s Electoral College tie scenario in which the House of Representatives would determine the next President.


If Obama loses IN, OH, NC, NH, NV, FL and IA, while keeping Virginia and his other 2008 states, it is 269-269, and the House of Representatives picks the new president, with each state’s delegation having one vote and 26 votes needed for election. In today’s House, the Republican would win by a vote of 33 to 16. One state, Minnesota, has a tied delegation and presumably would not cast a vote.

Here it is in graphic form: 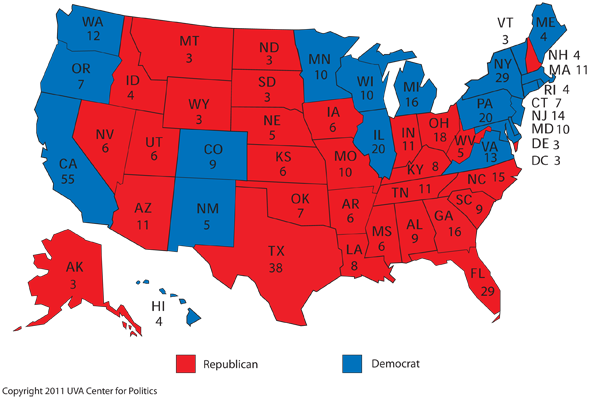 If the economy remains as poor as it is today, I don’t think it will be anywhere close to a tie and the GOP nominee will easily win the 270 votes necessary in the Electoral College.