It is all Saul Alinsky – ALL of the time.

Gee, I don’t know who are the bigger Wall Street tools here, Obama or these Alinsky-like LEFT protesters.

The ignorance displayed in these interviews knows no bounds. The protesters just don’t get it. They are calling for the government to use force to impose their ideas, all in the name of bringing down corporations who they don’t realize have completely bought off government regulators. Corporations and government enjoy a mutually beneficial relationship – getting one to regulate the other is asinine and only hurts smaller businesses who are legitimately trying to compete in a free market economy that barely exists.

The zeal for totalitarian government amongst some of the “protesters” is shocking. One sign being carried around read, “A government is an entity which holds the monopolistic right to initiate force,” which seems a little ironic when protesters complain about being physically assaulted by police in the same breath.

One woman interviewed by Kokesh also announces her intention to help Obama to capture a second term. How can a self-proclaimed Occupy Wall Street protester simultaneously support the man whose 2008 campaign was bankrolled by Wall Street, whose 2012 campaign is reliant on Wall Street to an even greater extent, and whose cabinet was filled with Wall Street operatives?

Watch the video and weep.

Over educated and unemployed, eh?

I can see why they are unemployed…… 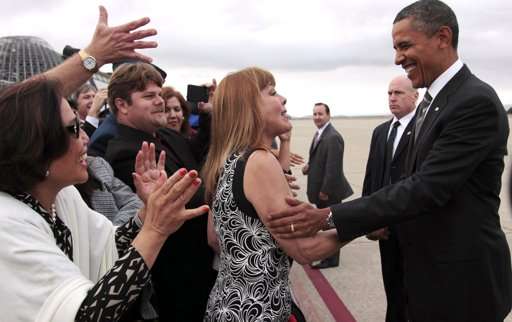 President Barack Obama stops to greet people on the tarmac during his arrival at Moffett Airfield, near San Jose, Calif., Sunday, Sept., 25, 2011

At a fundraiser in San Jose, Calif., Obama said that some in the audience might be former Republicans “but are puzzled by what’s happening to that party,” and voters should back him if they believe in a “fact-based” America.

“I mean has anybody been watching the debates lately?” Obama said. “You’ve got a governor whose state is on fire denying climate change.

“It’s true. You’ve got audiences cheering at the prospect of somebody dying because they don’t have healthcare. And booing a service member in Iraq because they’re gay.”

The remarks represent some of the most direct and combative for Obama so far as he has struck out on the campaign trail in earnest following the July debt-ceiling debate and the August break.

Obama continued his critique of Republicans, saying of the boos in the audience at recent GOP debates: “That’s not reflective of who we are.”

“This is a choice about the fundamental direction of our country,” the president said. “2008 was an important direction. 2012 is a more important election.”

President Obama is campaigning directly out of the Saul Alinsky playbook: “Ridicule is man’s most potent weapon. It is almost impossible to counteract ridicule. Also it infuriates the opposition, which then reacts to your advantage.”

He is creating divisions and being combative. Such a shocker = NOT.

I suppose Obama might as well MOCK because it is the only strategy he has because his record as President SUCKS and even the LEFT knows it.

Good luck at that fundraiser in Los Angeles today, Mr. President, when you tie up all of the roadways so you can socialize at the House of Blues with Hollywood celebrities.

If you ever wondered if today’s LEFTIST union leaders ever read Saul Alinsky, now you know.

The University of Missouri has an expansive $1.9 billion enterprise with an operating budget of $500 million which, according to its website, 37%  comes through state appropriations. While the University’s Institute of Labor Studies may only be a small fraction of its budget, one must wonder why tax dollars are being used to fund a program that espouses Communism, teaches tactics in industrial sabotage (including stalking CEOs, using members to insinuate sabotage, as well as the killing of cats), and convincing union members that their “group goals” are more important than their individual goals.

The videos you are about to see [via BigGovernment] are of two “educators” holding courses via video conference through the University of Missouri-St. Louis (UMSL) and the University of Missouri-Kansas City (UMKC). The courses are an Introduction to Labor Studies and Labor Politics and Society.  The instructors are Judy Ancel, Director of UMKC’s Institute of Labor Studies and Don Giljum, a self-described Communist and Business Manager of the International Union of Operating Engineers Local 148.

Watch the videos and understand why companies like Boeing Corporation are moving their manufacturing facilities to Right to Work states.

After watching both videos, do you now understand the Wisconsin public employee protests at the State Capitol and the various intimidation tactics used against Governor Scott Walker and GOP legislators?

Exit question: In light of this knowledge, of how the unions create chaos as a bargaining tactic, do Americans really want public employee unions collectively bargaining with the government?

You remember the information on the Saul Alinsky type street protest which will protest the Koch brothers right to free speech and assembly this weekend in the Palm Springs area of California.

So, you ask, what is the big deal?

Already, leftist groups are beginning to fulminate (against what, it’s not quite clear), insisting that there’s something inherently corrupt in the free assembly of the Koch brothers and their cohorts.

Reich sounded the Koch alarm: “their ongoing biannual meetings epitomize the problems that our democracy are facing right now,” he told the participants on the conference call. These meetings, he said, are a “perfect storm for democracy,” because the Koch brothers are rich and can participate in politics, “and we have secrecy – it’s all in secret.”

So, the Koch brothers hold private assemblies, participate in politics, and are, therefore, a threat to our democracy. Got it?

OK, I get it. The Koch brothers have a lot of money, donate to conservative causes, think tanks and candidates (all within the law) and the FAR LEFT and BIG LABOR don’t like it.

Listen to the entire audio above and smile as to how stupid and ridiculous the LEFT can be. They REALLY are.

This weekend conference is NO different than countless others that are held every weekend and with folks who meet to represent their industry or political ideology within the American political process. I have been to plenty through my career for organized dentistry, for example.

If you even listen hard enough to the audio above, you will hear two of the speakers try to answer the question as to why this conference is any different than any other?

The answer: The Kochs have more money.

It is not any different, yet organized Labor will send its minions into the streets with idiotic signs to make asses out of themselves, protesting people in suits, listening to speakers talking about limited government. Real dangerous stuff here.

Who is Sponsoring the “Uncloaking the Kochs” Protest?

Remember the flap and the Saul Alinsky style street protest which I mentioned yesterday?

This morning it has been picked up by Politico.


This weekend, for the eighth straight year, the billionaire Koch brothers will convene a meeting of roughly 200 wealthy businessmen, Republican politicians and conservative activists for a semi-annual conference to raise millions of dollars for the institutions that form the intellectual foundation – and, increasingly, the leading political edge – of the conservative movement.

In the past, the meetings have drawn an A-list of participants – politicians like Sen. Jim DeMint of South Carolina, leading free-market thinkers including American Enterprise Institute president Arthur Brooks, talkers Rush Limbaugh and Glenn Beck and even Supreme Court justices – to mingle with the wealthy donors who comprise the bulk of the invitees. The meetings adjourned after soliciting pledges of support from the donors – sometimes totaling as much as $50 million – to non-profit groups favored by the Kochs.

For the most part, the meetings, which are closed to the public and reporters, have attracted little attention outside conservative circles. But very different circumstances surround the Koch conference set to begin Saturday at an exclusive resort outside Palm Springs, Calif.

The Koch brothers – Charles and David – have come under intense scrutiny recently for their role in helping start and fund some of the deepest-pocketed groups involved in organizing the tea party movement such as Americans for Prosperity, and for steering cash towards efforts to target President Barack Obama, his healthcare overhaul, and congressional Democrats in the run-up to the 2010 election.

Liberal critics have launched a campaign to highlight what they say is the systematic way in which the Kochs use their political giving to advance a conservative economic and regulatory agenda designed to further the interests of their oil, chemical and manufacturing empire.

So, who is behind the protest of this conference? The usual LEFT organizations but let’s take a close look.

1. Common Cause –  sponsoring organization of the Uncloak the Kochs – The Billionaires Causcus and its Threat to Our Democracy.

There are others, but you get the point – The FAR LEFT and BIG LABOR.

And, Big Labor is helping organize the turnout and bus rides down to the Palm Springs area to protest on the streets. This is how they roll.

But, what is there to protest? Politics? Fundraising? Political Activism? Hobnobbing with the rich and famous?


While the Koch conferences have taken on an undeniably political edge – a June summit featured sessions on voter mobilization efforts for the 2010 midterms as well as solicitations for an ad campaign attacking Democratic lawmakers – those who have attended say the meetings say the critics have it all wrong.

“The main goal of the seminars appeared to me to be education on the challenges that face the American system of free enterprise and democracy, and what people can do about them,” said Virginia Gov. Bob McDonnell, a conservative Republican who has attended at least seven of the meetings.

McDonnell, who is not attending this weekend’s conference, said he was introduced to the gatherings by “free market friends up in Northern Virginia, some in the Koch enterprises institution,” and he cast the conferences as playing an important role in the political process.

“Groups on the right, left and in the middle get together all over this great country to exercise their first amendment rights to talk about these issues – some of them are public. Some of them are closed meetings,” he said. “So, to the degree that some on the left may be trying to attack these Koch seminars is really ridiculous.”

Really ridiculous is correct. This is good government in action and the LEFT hypocritically runs the same type conferences and accepts money from large donors like George Soros – hello!

This entire protest is a Saul Alinsky type of exercise to ridicule/humiliate/demonize the RIGHT for the benefit of the LEFT – that is all.

I don’t think it will work.