More symbolism over substance from the LEFT.

Democrat Senate candidate Elizabeth Warren says she listed herself as Cherokee to get invited to tribal “luncheons.” So, why did she turn down a powwow with her alleged kin?

When the Boston Herald learned the blue-eyed blonde had listed herself in faculty recruiting directories as an American Indian, Warren denied trying to get an affirmative action leg up. She insisted she ID’d herself as a minority for social reasons.

“I listed myself in the directory in the hopes it might mean I would be invited to a luncheon with people who are like I am,” Warren explained.

Well, some Cherokee women have called her bluff. Four authentic Indians traveled to Boston from Oklahoma, Oregon and Missouri to arrange a lunch with Warren — and she snubbed them.

They were in town four days, yet Warren couldn’t find time to fit them into her schedule. Even her staff blew them off. Her campaign never even returned their calls, despite an earlier promise that at least some staffers would meet with them.

Does Warren have any thoughts on baseball?

According to the latest Suffolk Poll.

Republican Senator Scott Brown is popular, has plenty of campaign cash and looks at this point an almost lock for re-election to a full six year term in very blue Massachusetts.

Apparently so, according to a DSCC poll.


Massachusetts is a deeply Democratic state, one in which barely more than 15 percent of the seats in the state Legislature are held by Republicans and fewer than 15 percent of all registered voters belong to the GOP. So it’s hardly surprising that national Democrats have been making noise about defeating the state’s Republican senator, Scott Brown, when he stands for reelection next year.

“It’s a priority for us,” Guy Cecil, the executive director of the Democratic Senatorial Campaign Committee, told the Boston Globe when he made a two-day trip to the Bay State earlier this month.

But the DSCC received some bad news this week when a poll it commissioned found that Brown’s popularity is soaring. The survey, which has been seen by at least one D.C. insider and was detailed for Salon, measured Brown’s approval rating at 73 percent — easily surpassing the scores for Barack Obama and the state’s two top Democrats,  Gov. Deval Patrick and Sen. John Kerry. It also found him running over the magic 50 percent mark against every potential Democratic challenger, and crushing the strongest perceived Democrats (Reps. Michael Capuano and Ed Markey and former Rep. Marty Meehan) by double-digit margins. The results only grew closer when respondents were primed with negative information about Brown.

Good news for the GOP in taking over the U.S. Senate majority in 2012. The Republicans need to win a net of three seats to replace Harry Reid as Senate Majority Leader.

U.S. Sen. Scott Brown, R-Mass., poses with Dawn Rogers and her sleeping son Zander, 15 months, after Brown signed a copy of his new book, ‘Against All Odds,’ at a bookstore in Boston, Tuesday afternoon Feb. 22, 2011

In fact, more than half of registered voters say he deserves re-election.


Republican Scott Brown is in a strong position as he prepares to seek a full six-year term in the United States Senate in 2012, according to the latest survey from the Western New England College Polling Institute.

Also, 52 percent of registered voters say Brown deserves to be re-elected, while 28 percent say he does not deserve to be re-elected. Brown won a special election in January 2010 to serve the remainder of the late Senator Edward Kennedy’s unexpired term and is expected to seek a full term in 2012.

The Democrats want to recapture the “Kemnedy” Senate seat but Senator Scott Brown, a Republican has proven to be popular.

But, will his popularity hold as the election season nears?

At the opening ceremony of the MIT Koch Cancer Institute, Sen. Scott Brown (R-MA) thanks petrochemical billionaire David Koch and his wife Julia for their support in Brown’s special election, and asks for more money for his re-election campaign in 2012.

The George Soros funded shills over at Think Progress are still all over the Koch Brothers. This time it is with Massachusett’s Senator Scott Brown at the public dedication of MIT’s David H. Koch Integrative Cancer Institute last Friday night.

BROWN: Your support during the election, it meant a, it meant a ton. It made a, it made a difference and I can certainly use it again. Obviously, the uh . . .

KOCH: When are you running, uh, for the next term?

BROWN: I’m in the cycle, I’m in the cycle right now. We’re already banging away. But you guys should all be very proud. I mean this is amazing. I’ve actually taken the tour and uh just the things you aim to attack this issue is, is huge.

BROWN: Thank you, for your leadership.

KOCH: Susan was the main uh uh person who created the idea of combining the uh the bioengineers with the cancer researchers and then uh, so she’s a brilliant lady and a leader here.

And, why not ask for a contribution? I mean Scott Brown is a POL. If you don’t ask, then you won’t receive, right?

Good grief, this Alinsky crap from the FAR LEFT is getting a little old.

I was looking over Flapsblog.com tonight and I noticed this Google Ad showing up on the main page (right sidebar): 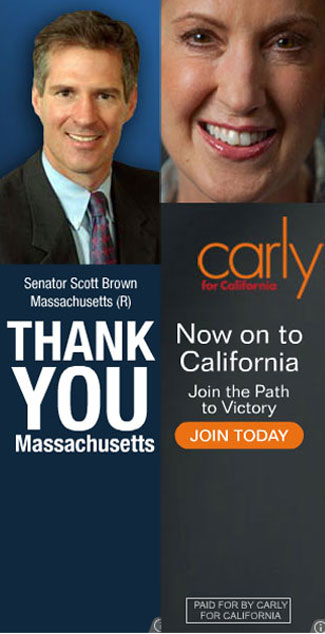 When you click on the ad you are directed to this page:

If it is not a formal endorsement, it is pretty darn close since Brown is definitely raising money for her.

And, what does this mean for Chuck DeVore and Tom Campbell?