Skip to content
As tens of thousands of public employees skipped work last week to attend protest rallies outside the Wisconsin State Capitol, many wondered if they would face any disciplinary action for unexcused absences.

On Saturday, a group of men and women in lab coats purporting to be doctors were handing out medical excuse notes, without examining the ‘patients.’

You remember the Flap.

Now, the physicians are under investigation for their wrist slap.

The state Department of Regulation and Licensing and the Medical Examining Board said Wednesday that they had opened investigations into eight individuals who allegedly wrote doctor excuse notes for protesters at the state Capitol during rallies in February.

Last month, the Department of Regulation and Licensing said it had identified 11 people who may have provided the medical excuses, and it asked them to submit information about their activities at the Capitol.

Three members of the Medical Examining Board reviewed the information and decided to open investigations on eight of the 11, according to a department news release.

The eight being investigated are all licensed physicians, department spokesman David Carlson said.

Investigations were not opened against three people because the panel concluded no violations had occurred, the news release says.

The 11 were identified by complaints to the department. Nine of those named are licensed physicians and two are unlicensed, the department said.

The investigations will include a more extensive fact-finding process to determine if any violations of law occurred, according to the news release.

At the conclusion of each investigation, recommendations will be made about whether disciplinary action should be pursued.

The state Department of Regulation and Licensing previously has said disciplinary action could include a reprimand, license limitations, suspension or revocation.

Looks like a reprimand is coming and I doubt that anything harsher than this will occur.

Are the physicians wrong?

Yes, and they are a disgrace to the medical profession.

I hope they serve a five year probation though and are required to sit through boring classes on medical ethics.

Now, that will be punishment.

Organized labor has pulled out all of the stops to defame the incumbent Justice so that they can elect their hand-picked minion, Joanne Kloppenburg and repeal Scott Walker and the Wisconsin GOP’s public employee collective bargaining reforms.

Will there be a backlash by the voters of Wisconsin against the union’s lies.

I guess we will see next Tuesday.

On Tuesday, April 5, Supreme Court Judge Dave Prosser — the swing vote on the court — is up for re-election in Wisconsin. If he loses, the Walker reforms on collective bargaining and education reform die with him. The liberals are in the lead with ads saying Prosser=Walker and phony allegations that he did not prosecute a child molestor. We need to get involved, active, and engaged to save Prosser!

So, if you live in Wisconsin vote and if you do NOT, then go here and contribute a few bucks.

“Citizens for Impartial Justice” was formed to insure that the Wisconsin Supreme Court remains impartial and does not become an activist court. Our independent PAC is committed to support the voters in recognizing the outstanding accomplishments of David Prosser, and returning him to the Court for another 10 years. He has established a record of strict construction and adherence to well developed precedent. Justice Prosser does not work to expand the court’s role in our lives; he rejects extreme positions.

Prosser’s fair and impartial service on the Wisconsin Supreme Court over the past 12 years is a credit to Wisconsin’s long tradition of scholarly and well balanced development of the law. He works to instill collegiality on a Court in the face of an aggressive and manipulative bloc of Justices intent on rendering decisions based on personality and power aggrandizement. He deserves reelection!

A vote for Prosser is a vote for fair and impartial justice with no gimmicks
and no personal agenda.

Mickey Kaus gives the run down as to what is at stake in the April 5 election.

In a counter-intuitive way, the RIGHT should hope for a Democratic victory and an overturning of the Wisconsin labor reforms?

Walker’s (and Kasich’s and Daniels’) anti-union reforms are having an effect nationwide, even in states where unions are strong. In Los Angeles, for example, a coalition of unions just agreed to non-trivial increases in health and pension contributions for existing workers that will save $400 million. One reason they agreed was undoubtedly the fear that anti-union fever might spread even to California. If Walker gets beaten, public employee unions all over the country will stop being so amenable. (Maybe that will be good for Republicans, in a dialectical way,  because government will become more unaffordable and the “blue state model” will move closer to total bankruptcy. The contradictions will be heightened, if you will. But it will be bad for anyone who wants a working government and lower taxes.)

And, the Democrats politicizing the Wisconsin Supreme Court might actually help Scott Walker as well – giving Walker a political foil. 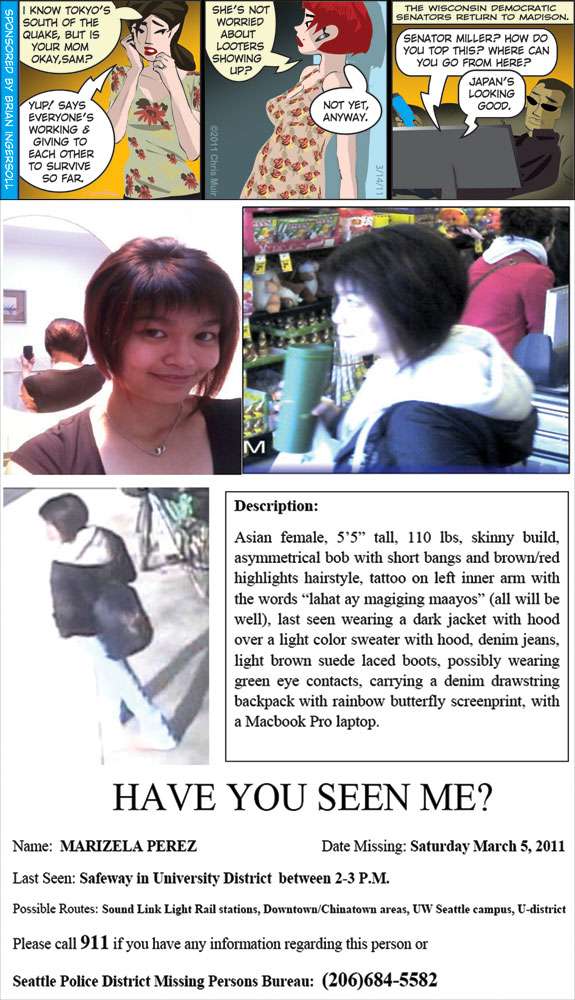 Day by Day by Chris Muir
Japan’s earthquake and resulting tsunami is a true disaster. The Wisconsin Democrats and their supporters on the Far Left are just ridiculous.

Now, the Democrats and unions are promoting recalls of Republican Legislators who voted to support Wisconsin Governor Scott Walker’s budgetary reform plan. Are we now going to recall every Legislator if they vote a way that the unions don’t support? And, will the Democrats who know they will lose a specific vote, then just leave the state rather than suffer the loss?

A bad series of precedences are being set in Wisconsin.

Senator Taylor really should go back to Wisconsin and do the job Wisconsin voters elected her to do.

There are more of her rants here.