Another decrease in the unemployment rate and this time to the magic Presidential re-election rate of 8.0%.

U.S. unemployment, as measured by Gallup without seasonal adjustment, dropped to 8.0% in May, a new low since Gallup began measuring employment in 2010, and more than a full percentage-point decline from May 2011. Gallup’s seasonally adjusted number for May is 8.3%, down from 8.6% in April. However, that remains higher than the seasonally adjusted low of 7.9% recorded in January 2012.

The unemployment rate is better, but the conventional wisdom is that the economy, if anything, is stagnant.

Tomorrow the U.S. government’s unemployment’s numbers will be out via the Bureau of Labor Statistics.

Despite recent drops in unemployment reported by Gallup and the U.S. Bureau of Labor Statistics, the U.S. employment situation remains fragile. Although Gallup’s unadjusted number is at a new two-year low, the adjusted number remains higher than January’s number, suggesting that the recent declines reported by the BLS may not continue. Further, many demographic groups, including young adults and minorities, continue to be burdened by unemployment rates that are significantly higher than the national average. Substantial improvements will need to be made before these groups feel relief.

Still, the situation is better than it was a year ago, and underemployed workers in the U.S. seem to sense positive momentum and are more optimistic about finding work than they were at the beginning of the year.

According to the latest Gallup unemployment poll.

U.S. unemployment, as measured by Gallup without seasonal adjustment, declined slightly to 8.2% in mid-May from 8.3% in April. Gallup’s seasonally adjusted unemployment rate is 8.5% in mid-May, down slightly from 8.6% last month.

These results are based on Gallup Daily tracking interviews conducted over the 30 days of April 16 to May 15, including interviews with 30,236 U.S. adults, 67.5% of whom are active in the workforce. Gallup’s seasonally adjusted unemployment rate incorporates the adjustment used by the U.S. Bureau of Labor Statistics in the same month of the previous year.

On an unadjusted basis, the mid-May unemployment rate, if sustained the rest of the month, would represent a new monthly low in unemployment since Gallup began tracking it daily in January 2010, down from the previous low of 8.3% recorded last month and from 9.2% last May.

Incorporating the upward seasonal adjustment of 0.3 percentage points that the BLS applied last May yields a seasonally adjusted rate for mid-May of 8.5%. This is substantially higher than the seasonally adjusted monthly low of 7.9% for Gallup’s U.S. unemployment rate in January of this year, but significantly lower than the 9.5% in May 2011.

Nothing earth shattering here with the unemployment rate.

A big drop is what the Democrats and President Obama’s re-election campaign wants, but I do not think this will happen anytime soon.

Underemployment is also down slightly.

Gallup’s U.S. underemployment measure, which combines the unemployed with those working part time but looking for full-time work, is 18.0% in mid-May, compared with 18.2% in April. The underemployment rate declined to as low as 18.0% last July but changed direction in August. It increased to 19.1% in February before plunging to 18.0% in March and 18.2% last month.

There is slow American economic growth and American businesses may be holding back because of either the upcoming election or the Supreme Court’s ruling on ObamaCare.

Also, in a warning sign for the government, unemployment numbers may have improved a little, simply due to the fact that long term unemployed people have stopped looking for work.

Moreover, there is also considerable variance of Gallup’s unemployment numbers and those released by the Obama Administration. Go figure.

It is possible that the government’s unemployment numbers for May could revert back to the Gallup trend, as occurred in March and during much of late 2011. Still, there was a considerable gap between Gallup’s results and those of the government in February and April. Regardless, Gallup’s preliminary unemployment numbers for May, based on continuous daily measurement, show a slight improvement compared with April. 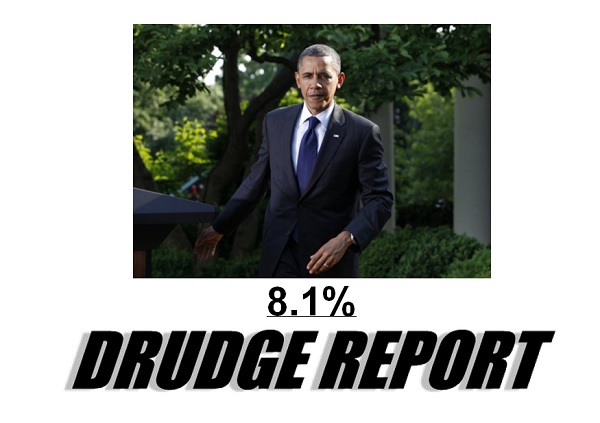 U.S. unemployment, as measured by Gallup without seasonal adjustment, declined to 8.4% in March from 9.1% in February, while Gallup’s seasonally adjusted rate fell to 8.1% from 8.6% in February.

These results are based on Gallup Daily tracking interviewing conducted in March, including interviews with 31,283 U.S. adults, 67.8% of whom are active in the workforce. Gallup’s seasonally adjusted unemployment rate is based on the adjustment used by the Bureau of Labor Statistics in the same month of the previous year.

This is some good news for the American economy. And, why President Obama has been rising in the polls, as of late.

Americans are feeling better about their jobs and their economic job prospects.

Gallup’s U.S. underemployment measure combines those unemployed with those working part time but looking for full-time work. As a result of sharp declines in both of these groups, the underemployment rate, on an unadjusted basis, fell to 18.0% in March from 19.1% in February 2012. The underemployment rate declined to as low as 18.0% last July before reversing course in August; it also increased from November through January.

Now, these numbers are from Gallup and not the government, Bureau of Labor Services. Here is the comparison chart:

Whichever the numbers, there is a decided downward trend = good news for Americans.

Gallup’s seasonally adjusted unemployment rate decreased in March to 8.1%, slightly higher than January’s 7.9% reading but an improvement from 8.5% in Gallup’s preliminary mid-March estimate. The March and January rates are the two lowest since Gallup began monitoring and reporting unemployment in January 2010. They are also consistent with Gallup’s other behavioral economic data for March showing a new high in Gallup’s Economic Confidence Index and a post-recession high in its Job Creation Index as well as strong consumer spending.

While the sharp drop in the U.S. unemployment rate during recent months is clearly good news, it raises some significant economic questions. Traditional economic analysis raises the question of why the unemployment rate is falling much more rapidly than can be justified by the modest pace of current economic growth. Answering this question is essential to determining the sustainability of the declining trend in unemployment.

Federal Reserve Board Chairman Ben Bernanke made this issue the centerpiece of his recent speech to the National Association for Business Economics, noting, “the better jobs numbers seem somewhat out of sync with the overall pace of economic expansion.” He went on to explain his hypothesis that companies shed many more jobs than necessary during the recession and financial crisis of 2008-2009, and now they are correcting their workforces for this understaffing of the past. The chairman went on to suggest that achieving further declines in the unemployment rate is likely to require a more rapid pace of economic growth going forward.

f Bernanke is right, then the rapid decline in the unemployment rate might be approaching its end as individual businesses achieve a right-sizing of their workforces. Further, traditional economics also suggest that many people who have been sitting on the sidelines waiting for the economy to improve might decide that now is the time to seek a job, increasing the baseline figure used to calculate unemployment. In turn, this could keep the unemployment rate from decreasing or even send it higher, negatively affecting economic confidence and the overall economy — not good news for political incumbents, including the president.

On the other hand, the economy might continue to build on the momentum indicated by the current positive trend in Gallup’s behavioral economic data, or perhaps the economy is already growing faster than the current economic data suggest. Either way, if true, the unemployment rate could fall below 8.0% in the not-too-distant future — particularly if the workforce does not grow — meaning good things for the economy, incumbents, and the president’s re-election effort.

In other words, this decline in unemployment and underemployment may be an outlier from economic activity or a portent for increasing economic growth to come.

U.S. unemployment, as measured by Gallup without seasonal adjustment, increased to 9.1% in February from 8.6% in January and 8.5% in December.

The 0.5-percentage-point increase in February compared with January is the largest such month-to-month change Gallup has recorded in its not-seasonally adjusted measure since December 2010, when the rate rose 0.8 points to 9.6% from 8.8% in November. A year ago, Gallup recorded a February increase of 0.4 percentage points, to 10.3% from 9.9% in January 2011.

And, the Underemployment Rate has increased:

Gallup’s U.S. underemployment measure, which combines the percentage of workers who are unemployed and the percentage working part time but wanting full-time work, increased to 19.1% in February from 18.7% in January.

Remember the pundit-accepted unemployment rate threshold required for re-election of the current President of 8%.

The one exception was when Ronald Reagan was President and the economy was demonstrably improving.

Today, the US. Unemployment rate continues above 8 per cent and it not improving = warning signs to the White House.

All of this in advance of tomorrow’s U.S. government’s release of its unemployment rate numbers. Let’s see if they show the same trend, as some have surmised that the Obama Administration Labor Department is massaging the numbers.

The U.S. unemployment rate, as measured by Gallup without seasonal adjustment, is 9.0% in mid-February, up from 8.6% for January. The mid-month reading normally reflects what the U.S. government reports for the entire month, and is up from 8.3% in mid-January.

Gallup also finds 10.0% of U.S. employees in mid-February are working part time but want full-time work, essentially the same as in January. The mid-February reading means the percentage of Americans who can only find part-time work remains close to its high since Gallup began measuring employment status in January 2010.

Although the past few weeks, the pundits have been spinning that the economy has been improving. America is not out of the woods just yet as far as unemployment.

But, the trend is upward in the unemployment rate.