It wasn’t a pretty loss for Carly Fiorina where polls had the race much closer than the 9-10 point Boxer victory.


After monitoring results overnight, Republican Senate candidate Carly Fiorina conceded defeat Wednesday morning after her hard-fought race with Democratic Sen. Barbara Boxer, stating that she was proud of every moment of her campaign.

Speaking to reporters and a small group of supporters with her husband at her headquarters in Irvine, the former Hewlett-Packard chief executive said the experience had been a privilege and that she had been touched by every person she met across California. She said she ran because she was concerned that attaining the American dream had become too hard for too many people and that she was still worried about out-of-control spending in Washington.

“We had an exceptional campaign,” Fiorina said. “In the end we could not overcome the registration that Democrats have, and in particular in L.A. County.”

Demographics played a role (look at the California map) but so did the relentless negative advertising by Barbara Boxer who portrayed Carly Fiorina as a greedy corporate executive who laid employees off by shipping their jobs offshore and enriched herself at the same time. The late in the campaign ads which featured outsourced Hewlett-Packard employees was devastating to Fiorina – particularly in populous Los Angeles County where the ads played ubiquitously in the last two weeks of the campaign.

I was at the Irvine, California Fiorina headquarters yesterday afternoon through the early morning hours. Here are some photos which I snapped: 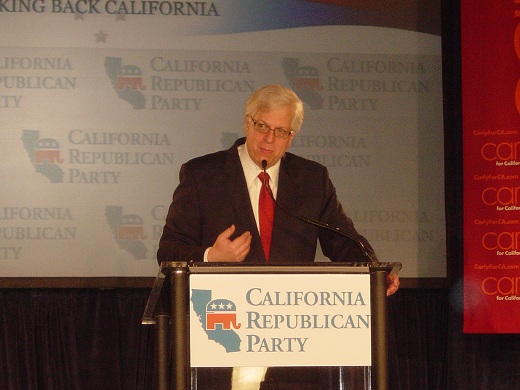 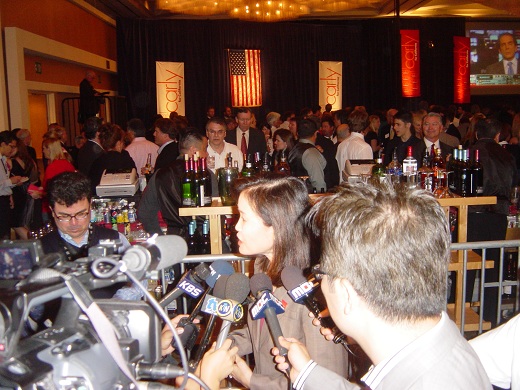 California Board of Equalization member Michelle Steel being interviewed 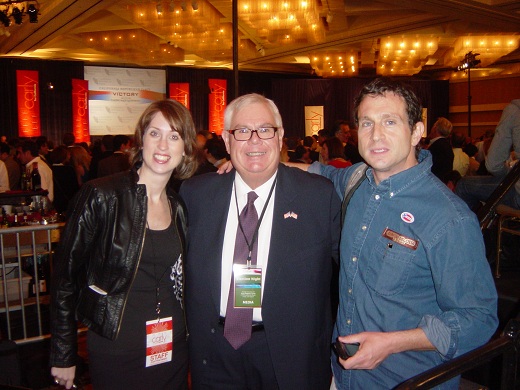 
So, one has to consider whether it was worth the Carly Fiorina effort to challenge Barbara Boxer in “deep blue” California, raise, plus spend, the millions of dollars in campaign cash and come out with a loss that is about what Matt Fong experienced in 1998.

Somehow I think it was, since Boxer herself acknowledged that this race was “the toughest and roughest campaign of my life.” Plus, Boxer had to utilize the full resurces of her incumbency to fight back Fiorina, including multiple President Obama fundraising events. Boxer spent $ millions which could have been redistributed to other states for other Democrat campaigns. And, she spent like a drunken sailor on television ads the last month of the campaign.

But, with this said, California Democrats who have a massive registration advantage, pretty much swept the California election board and shellacked the GOP – from Jerry Brown’s election as Governor to Loretta Sanchez’s re-election to the House. Even GOP favorite California Attorney General candidate Steve Cooley is in a close race which will be decided by absentee ballots (counted over the next few weeks).

I doubt whether the national GOP will place as many resources into California to win a statewide race (such as Senator Diane Feinstein’s re-election in two years) anytime soon – or my lifetime.

You remember the FLAP?

This will make for some interesting political theater after the GOP takes over the House and Maxine Waters gets to face her ethics trial.


As the Chair of the Senate Ethics Committee, and a 28-year inhabitant of Washington, DC, locked in a surprisingly tight race for re-election, one might expect Barbara Boxer to avoid controversial figures like the plague.  But the challenges facing Boxer as she seeks to win a fourth term in the U.S. Senate on Tuesday apparently haven’t stopped her from buying the endorsement of her close friend, embattled Rep. Maxine Waters, once again.  Below the fold are images of the pages of Waters’ 2010 general election “slate mailer” obtained by Big Government on Saturday, which showcases her endorsement.  On page three of the mailer itself, Boxer is prominently recommended by Waters.

Here is some of the endorsement mailer:

I am looking forward to see both Maxine Water’s and Barbara Boxer’s FEC report on the expenditure after the election.

Let’s hope that on the Barbara Boxer side it becomes a moot exercise with the election of Carly Fiorina. In any case, Maxine Waters is going to have some ethics problems.

I would say yes.

In fact, Real Clear Politics has moved the California Senate race to toss-up over the weekend from leans Democrat.

Let’s look at the last few polls with Senator Barbara Boxer’s supposed insurmountable lead disappearing into the margin of error. Remember in the latest PPP poll which is a Democrat sponsored poll, Boxer was ahead by 9 points just one week ago.

The California polls are skewing the number of Democrats Vs. Republicans Vs. Decline to State voters. They really have NO idea who will turn out and actually vote in such a large state.

I think Carly Fiorina, despite the scathing negative TV ads, will ultimately win this race by 3 points. Boxer has done a poor job for California, the economy here sucks and voters will punish her by sending her to retirement.

Carly Fiorina, who is running as a republican for California Senate, campaigns at the Sugar Shack candy store in Menlo Park, Calif., Friday, Oct. 29, 2010

Well, not really – more  like a trick but Carly is back on the trail and hoping for a good turnout on Tuesday in this tight Senate race.

“No, Barbara Boxer, the stimulus bill hasn’t worked,” said Fiorina, the former Hewlett-Packard CEO, during a short visit to the Sugar Shack to highlight the importance of women-owned small businesses. “No, your policies of bailing, borrowing, spending, taxing are not working either.”

Asked about a new Field Poll that shows her trailing Boxer 49 percent to 41 percent — and among women by 15 points — Fiorina called the statewide poll “an outlier” compared to several others that show the race is “very, very tight” and “very, very winnable.”

“(Boxer) continues to say that taxing and spending and regulating and borrowing are creating jobs, when the facts are clear — they’re not, they’re destroying jobs in this great state,” Fiorina said.

Well, the race is still within the margin of error and the Dems cannot really claim this race as won.

Boxer posted a 48% to 46% lead a week ago. In spite of her powers as an incumbent and California’s strong Democratic leanings, Boxer’s been struggling to widen the gap all year. She’s held a small lead in every survey but one since February with 42% to 49% of the vote. Fiorina, a former CEO of Hewlett-Packard, has earned 38% to 47% support in those same surveys.

The Carly Fiorina for U.S. Senate campaign is having another online “Money Bomb” today.

Welcome Carly back to the campaign trail today by donating what you can.

Donations can be made here.