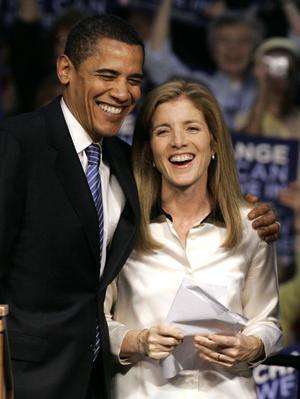 Flap is NOT shocked because the Kennedy Cabal have twisted arms.

New York Gov. David Paterson says the search is ongoing, but two people close to him tell The Associated Press they believe Caroline Kennedy will be appointed to replace Hillary Clinton in the U.S. Senate.

Kennedy’s less than stellar public performance appeared to be on his mind because he cautioned that just because he selects someone it doesn’t mean they will win the election outright.

“The public does not regard my selection as an incumbent. The public regards this as a place holder for two years and then will make their own choice,” Paterson said. “And that takes the pressure off me.”

Paterson and the New York Democrat Party would be much better served by appointing a more seasoned pol or even Bill Clinton as a caretaker Senator but the Kennedy’s have probably promised Paterson an Obama apppointment to a federal position since Paterson is unlikely to win re-election in 2010. The voters of New York will be short-changed with a light-weight as their U.S. Senator but who cares what they think, right?

The Democrats will have quite the trio entering the Senate: Caroline Kennedy who knows how to say, “You Know”; Roland Burris who tried to execute an innocent man; and Al Franken (should his slim lead hold in Minnesota) a lefty comic.

And, the GOP should care about having only 41 votes in the Senate, why?

Yes, Caroline Kennedy has been mentioned as Hillary Clinton’s replacement as a New York U.S. Senator as Hillary becomes Secretary of State. But, the story is re-emerging.

Is this a trial baloon of a David Paterson decision?

Could Caroline Kennedy, considered to be among the most private members of the Kennedy clan, be tapped to fill Hillary Clinton’s Senate seat?

Kennedy â€” who endorsed Barack Obama in February before the Super Tuesday round of primaries â€” is said to be considering the possibility, according to an ABC News report.

New York Gov. David Patterson, the man tasked with picking Hillary Clinton’s successor, is remaining mum on the process, but a spokesman for Barack Obama issued a statement in the wake of rumors the president-elect is quietly lobbying Patterson to choose Kennedy.

“President-elect Obama has a very high regard for Caroline Kennedy,” said Obama spokesman Stephanie Cutter. “But he has not spoken with Governor Paterson or Caroline Kennedy about the race, and has no involvement in this process.”

With Robert F. Kennedy,Jr. having taken himself out of the running earlier this week, it is likely that Caroline could get the nod for her uncle’s seat.

Or will Paterson appoint New York State Attorney General Andrew Cuomo to remove him from challenging Paterson for Governor in a Democrat Primary in 2010?