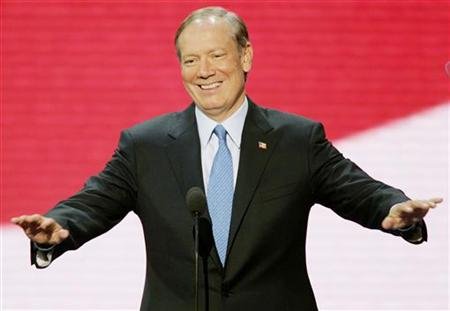 
While most of the media have gone ridiculously aflutter over Sarah Palin’s latest diesel-powered tourist outing slash fan dance, a far more interesting caper is quietly unfolding in New Hampshire. Former New York governor George Pataki is airing a new ad on a Granite State TV station, WMUR. The ad comes from a Pataki-sponsored group called No American Debt and is perfectly attuned to New Hampshire’s flinty primary electorate. So while others are playing cat and mouse with reporters, inspecting farms in Iowa with more hogs than people and pleading with legions of self-appointed Tea Party generalissimos, Pataki is running a very effective spot in New Hampshire.

I saw it and had to smile. My bet? Pataki is going to try to steal the New Hampshire primary: First, ignore all the silly inside games and get on television pronto with a good message. Move up quietly in the polls — with Mitt Romney sitting at a third of the vote, Palin unelectable and Tim Pawlenty drifting near the margin of error, Pataki could televise his way into second or third place in Granite State polls by midsummer. Then let the national media discover the Pataki surge and get bonkers about it. With that national attention, reboot the once massive Pataki money machine in New York State and start attracting more national money and support. Light the right match, and if it combusts correctly, stand back and watch the fire grow.

If Pataki generates real heat in New Hampshire, it will create an enormous headache for Romney. The last thing Romney needs is another can-do Northeastern governor in the race. It’s even worse for the ideologically murky Jon Huntsman, who is banking on a very similar formula of independents and mainline Republicans to sore his own New Hampshire upset. In a final Shakespearean twist, Pataki’s old home-state rival Rudy Giuliani will be watching all this carefully and thinking dark thoughts about the idea of President Pataki. He too is hinting at a possible run.

I think Rudy Giuliani is waiting for Sarah Palin and will run if she gets in. Maybe Pataki has done the same political calculus.

But, there is room for only one of them and Pataki is already running ads and has no debt like Rudy.

I guess the more the merrier.


A spokesman has confirmed that former Governor George Pataki is strongly considering entering the crowded race for the Republican presidential nomination.

Sources say Pataki, who left office in 2007, could make an announcement as early as next week.

If he were to run, Pataki would face several major obstacles including launching an operation with little campaign cash and facing several opponents who have been meeting voters in Iowa and New Hampshire for months.

Pataki has been a vocal critic of President Barack Obama’s health care plan.

There is a path to the GOP Presidential nomination for Rudy Giuliani but I do not know if Pataki will do particularly well. But, if and when Sarah Palin enters the race, in a multi-candidate field for GOP delegates, Pataki who is very experienced, may be a player.

But, can he raise sufficient campaign cash to run in New Hampshire and Florida?

The latest Rasmussen poll does not look good for Republicans Rudy Giuliani or George Pataki if New York Attorney General Andrew Cuomo runs from the Democrat side.

But, if incumbent New York Governor David Paterson runs it is a diffferent story.

But, at this stage of the race who is to say who will run for what, especially with a United States Senate seat thrown into the mix.

It is far from clear that either Giuliani or Pataki will seek the office. Sen. John Cornyn, head of the Republican Senatorial Campaign Committee, reportedly approached Pataki about a possible run for the U.S. Senate seat currently held by Kirsten Gillibrand.

The Rev. Al Sharpton, center, stands beside Caroline Kennedy as they field questions during a news conference outside the famed soul food restaurant Sylviaâ€™s in Harlem, New York, Thursday Dec. 18, 2008. The late President John F. Kennedyâ€™s daughter acknowledged Wednesday that she is seeking to be appointed to the Senate seat held by Hillary Rodham Clinton, who has been nominated by President-elect Barack Obama to be secretary of state

Caroline’s popularity with New York voters has been in a nosedive in the polls but it may all be moot for a number of reasons.

Caroline Kennedy‘s popularity has suffered a “clear hit” as a result of her public campaign for Hillary Rodham Clinton‘s Senate seat, while Attorney General Andrew Cuomo’s positive ratings have shot up, according to a new poll.

According to Public Policy Polling, of Raleigh, N.C., 44 percent of New York State voters now say they have a less favorable opinion of Kennedy than they did before she started vying for the position. Thirty-three percent say it’s made no difference, and 23 percent report now having a more favorable opinion of her.

Cuomo now leads Kennedy 58-27 in a survey of the preferences of state voters. Among Democrats, Cuomo is ahead of Kennedy 54-34 percent; a month ago, the survey found Kennedy ahead of Cuomo by 44-23 percent among Democrats.