Less than a quarter of Americans support making significant cuts to Social Security or Medicare to tackle the country’s mounting deficit, according to a new Wall Street Journal/NBC News poll, illustrating the challenge facing lawmakers who want voter buy-in to alter entitlement programs.

In the poll, Americans across all age groups and ideologies said by large margins that it was “unacceptable” to make significant cuts in entitlement programs in order to reduce the federal deficit. Even tea party supporters, by a nearly 2-to-1 margin, declared significant cuts to Social Security “unacceptable.”

At the same time, a majority supported two specific measures that lawmakers might employ to shore up the shaky finances of the main entitlement programs.

More than 60% of poll respondents supported reducing Social Security and Medicare payments to wealthier Americans. And more than half favored bumping the retirement age to 69 by 2075. The age to receive full benefits is 66 now and is scheduled to rise to 67 in 2027.

Depending on how they are structured, those two changes could eliminate as much as 60% of Social Security’s underfunding, according to experts. Support for the two ideas in the poll is “impressive,” said Chuck Blahous, one of the program’s public trustees and a former Bush administration official. “I wonder if [public] receptivity is increasing.”
The poll comes as Republican lawmakers, many elected on promises to slash federal spending, have focused mostly so far on cuts to non-defense, discretionary programs. But many political leaders say meaningful deficit reduction cannot be accomplished without making changes to entitlement programs.

Here is a graphic representation of the poll: 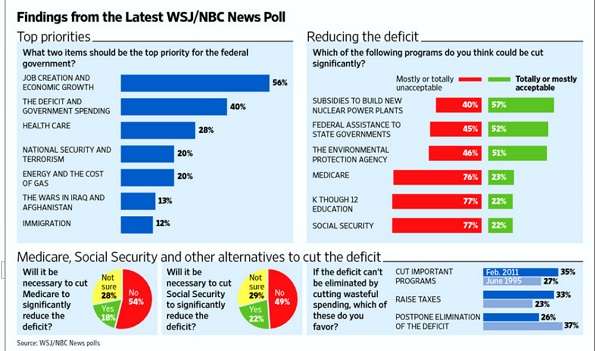 Of course, Americans don’t want the bad news and they certainly don’t want to cut their own entitlements. But something will have to be done if we want to reduce the debt we have to foreign nations and to spur economic activity. A bankrupt nation beholden to foreign investors certainly will not pay out ANY benefits.

Means testing is fine and a modest increase in the retirement age is OK. This can be done relatively easily and should be done immediately. If this takes care of 60 per cent of the problem in future years, then the GOP controlled House can move on to other budget cutting issues. 60 per cent is a start – even 40 per cent is good.

Naturally, the Democrats will demonize the Republicans to senior citizens but modest changes now and quickly will force President Obama to act either in a fiscally responsible manner or not.

Then, why Mr President have you pushed and signed into law massive government spending programs if America is out of money?

In a sobering holiday interview with C-SPAN, President Obama boldly told Americans: “We are out of money.”

SCULLY: You know the numbers, $1.7 trillion debt, a national deficit of $11 trillion. At what point do we run out of money?

OBAMA: Well, we are out of money now. We are operating in deep deficits, not caused by any decisions we’ve made on health care so far. This is a consequence of the crisis that we’ve seen and in fact our failure to make some good decisions on health care over the last several decades.

So we’ve got a short-term problem, which is we had to spend a lot of money to salvage our financial system, we had to deal with the auto companies, a huge recession which drains tax revenue at the same time it’s putting more pressure on governments to provide unemployment insurance or make sure that food stamps are available for people who have been laid off.

So, one option is just to do nothing. We say, well, it’s too expensive for us to make some short-term investments in health care. We can’t afford it. We’ve got this big deficit. Let’s just keep the health care system that we’ve got now.

SCULLY: When you see GM though as â€œGovernment Motors,â€ you’re reaction?

OBAMA: Well, you know â€“ look we are trying to help an auto industry that is going through a combination of bad decision making over many years and an unprecedented crisis or at least a crisis we haven’t seen since the 1930’s. And you know the economy is going to bounce back and we want to get out of the business of helping auto companies as quickly as we can. I have got more enough to do without that. In the same way that I want to get out of the business of helping banks, but we have to make some strategic decisions about strategic industries…

SCULLY: States like California in desperate financial situation, will you be forced to bail out the states?

OBAMA: No. I think that what you’re seeing in states is that anytime you got a severe recession like this, as I said before, their demands on services are higher. So, they are sending more money out. At the same time, they’re bringing less tax revenue in. And that’s a painful adjustment, what we’re going end up seeing is lot of states making very difficult choices there…

SCULLY: William Howard Taft served on the court after his presidency, would you have any interest in being on the Supreme Court?

OBAMA: You know, I am not sure that I could get through Senate confirmation…

Mr President, you have gone back to smoking crack if you think your health care reform program, Obamacare will ACTUALLY cost the taxpayers LESS than today. It will cost FAR MORE because universal care, unless you ration care and curb utilization, by any standards it will mean more Americans seeking care and more costly treatment. Ask the British and the Canadians about their systems.

Now, if you want to destroy the private medical delivery system in America and allow the Washington bureaucrats decide what care Americans can receive and what doctors patients can see, then you might be able to hold costs increases to a minimum but it will NOT lower the costs or solve the actuarial problems with the Medicare trust fund. But, then, again the quality of care will suffer and moe people will be waiting to see a doctor.

How about supporting some common sense health care reforms and getting REAL with the American public that they will have to pay more though their Medicare payroll taxes to support the current program. How about a little honesty.

And, how about ending your socialist, pie in the sky dream of uinversal health care for America and concentrate the government on helping American business to put people back to work. You know, stimulate business, more employment and hence more tax revenues.

Is this too simple for you?

Political Cartoon by Michael Ramirez
And, the Obama Administration is INCREASING spending while insolvency looms for social security and medicare?


Even as Congress hunted for ways to finance a major expansion of health insurance coverage, the Obama administration reported Tuesday that the financial condition of the two largest federal benefit programs, Medicare and Social Security, had deteriorated, in part because of the recession.

As a result, the administration said, the Medicare fund that pays hospital bills for older Americans is expected to run out of money in 2017, two years sooner than projected last year. The Social Security trust fund will be exhausted in 2037, four years earlier than predicted, it said.

Spending on Social Security and Medicare totaled more than $1 trillion last year, accounting for more than one-third of the federal budget.

Does anyone REALLY think that the United States can afford universal health care coverage and Obamacare? Hell, America cannot afford the system we have now.