With the sham impeachment of President Trump over and the virtual certainty of Trump’s re-election in November, who will be the GOP Presidential nomination in 2024? Poll ends on 12 February 2020.

This poll is no longer accepting votes 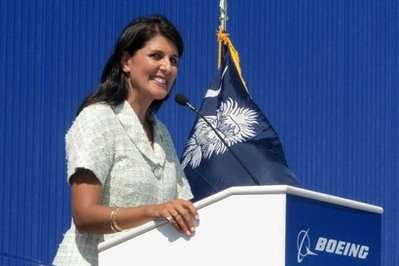 South Carolina Gov. Nikki Haley speaks during the dedication of Boeing Co.’s $750 million final assembly plant in North Charleston, S.C. on Friday, June 10, 2011. Haley and state officials have joined hundreds of Boeing workers in North Charleston to cut the ribbon opening the company’s 787 jetliner assembly plant at the center of a National Labor Relations Board dispute

Does anyone really think the Big Unions are going to be able to transfer these jobs back to Washington State?


Friday marked the opening of the Boeing (BA) 787 Dreamliner Final Assembly building in North Charleston, South Carolina, despite the state’s battle with the National Labor Relations Board about the company’s decision to build in South Carolina.

“The NLRB wants the jobs here transferred back to Washington State and that’s not going to happen,” South Carolina Attorney General Alan Wilson told FOXbusiness.com. “Opening this facility is an exclamation point.”

The $750 million facility, which finished construction six months ahead of schedule, features 642,720 square feet (roughly 10 football fields) of space and will produce three 787 Dreamliners per month.

“In this building, our talented Boeing South Carolina teammates are going to assemble the finest, most technologically advanced commercial widebody airplane in history,” said Jack Jones, vice president and general manager of Boeing South Carolina. “Airline customers from around the world will come to the South Carolina Lowcountry to take delivery of their 787s, and we look forward to demonstrating what ‘made with pride in South Carolina’ is all about.”

Boeing officials, workers, and politicians all took part in the event, praising the success of the company.

“To have our nation’s No. 1 exporter in this state…this is the game changer of my lifetime,” said US Congressman James Clyburn D-SC.

“I can’t wait to see those mack-daddy planes come out of here,” said Governor Nikki Haley.

This is Boeing’s second 787 facility, with the first housed in Washington state. In April, the NLRB sued Boeing for building in South Carolina, saying it chose to build in that right-to-work state as punishment to union members for previous strikes.

Hearings about this matter are scheduled to begin on Tuesday. While Boeing and the NLRB fight their battle, Boeing’s production in South Carolina will continue on as scheduled.

In this economy, the Obma administration is supporting Big Labor over American business. Washington state and the Boeing unions drove Boeing out and now they are trying to use the power of Obama’s Big Government to force Boeing to do it “their” way.


Facility construction began in November in 2009, creating more than 9,000 jobs for the construction phase. Thousands more jobs are expected to be created when the facility is running at full capacity.