So, what does it all mean?

One thing these numbers do reinforce is the recent ABC/Washington Post poll that showed Palin’s numbers plummeting even with Republican voters. When we polled Missouri in December Palin was at 25%, so her 14% now represents an 11 point drop in her standing over the last three months. Also while the other GOP frontrunners have seen modest drops in their net favorability since our previous Missouri Republican poll- 5 points for Romney, 3 for Gingrich, and 2 for Huckabee- Palin has seen a much more dramatic 16 point decline from +52 in December at 72/20 to now +36 at 63/27. There’s no doubt that the already limited interest in a Presidential bid from her that Republican voters had is declining even further.

The other thing that’s striking in these numbers is how weak Romney is. In 2008 Huckabee got 32% here and his current 29% standing doesn’t represent much difference. But Romney pulled 29% here last time around and his 13% now means he’s lost more than half of his support. His albatross here, as we’re seeing in more and more of our GOP polling, is voters describing themselves as ‘very conservative.’ They’re the largest segment of the Republican electorate in Missouri at 41%, and only 10% of them want Romney as their candidate next year.


Barack Obama’s looking somewhat weak in our national polling. The good news for him is that his prospective Republican opponents look even weaker, and that’s allowing him to maintain healthy leads in head to head match ups against each of them looking toward next year.

With Romney and Huckabee (do NO harm candidates) the GOP could possibly do better than McCain-Palin in 2008 but would likely lose. Gingrich, Palin and Pawlenty are really non-starters.

So, the GOP has a choice – develop new candidates like Chris Christie and Mitch Daniels or concentrate on winning the Senate and maintaining their majority in the House. 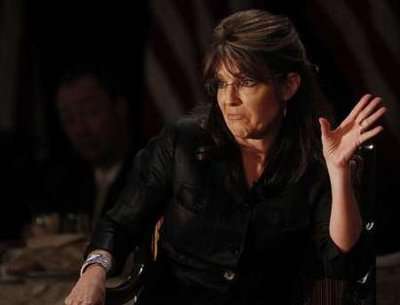 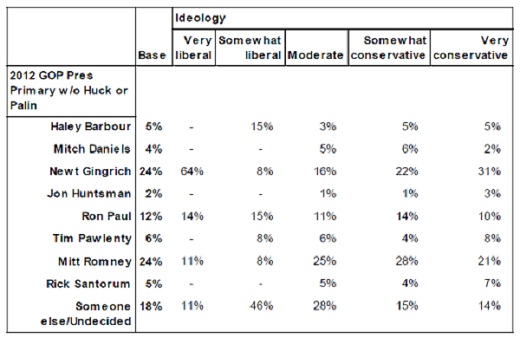